Unmanned aircraft have a distinct cost and safety advantage over using people on ropes, ladders, scaffolding and bucket trucks for inspections. 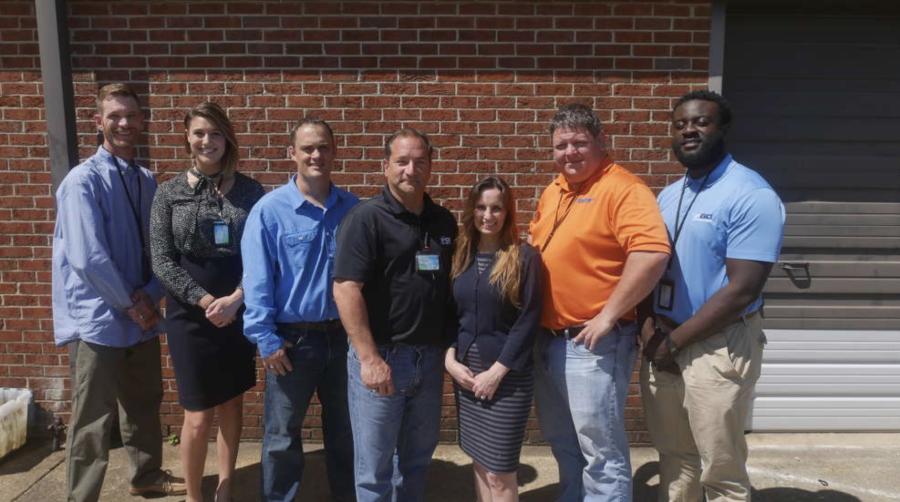 Go to any commercial or residential job site and you're sure to see a slew of traditional tools in the toolbox. Good old fashioned hammers, nails and screws will always have a place in site development. But what about your digital toolbox? Perhaps you're already using machine-control systems, GPS or building information modeling (BIM) technology to streamline the production process. But have you considered adding unmanned aerial vehicles (UAVs) to your digital toolbox? If you want to track progress and speed production on your job sites for a competitive edge, you need this additional tool in your toolbox.

The commercial and residential site development division of S. T. Wooten Corporation is responsible for project budgeting and estimating, engineering and project management of site work, including grading, borrow and backfill, clearing and grubbing, erosion control, environmental protection and more. As a GPS survey technician for the company, Kevin Capps is an early adopter of digital technology on the job site. Having adopted GPS systems years ago to help streamline traditional surveying methods, Capps spent many months researching the potential of unmanned aerial vehicles (UAVs) in a commercial setting. For the past year, he has been using the DJI Matrice 100 quadcopter in conjunction with Pix4D photogrammetry software to conduct topographical surveys to calculate dirt stockpiles and borrow pits on job sites and to make 3D models of their asphalt and concrete plants.

I recently spoke with Capps about how this technology generates real-time data the company uses to determine how far job sites have progressed, provide accurate billing and to give them a competitive edge to make future projects more profitable. Capps shared five lessons learned about why you need UAVs in your digital toolbox.

Aerial images, still or live action, look great on your website, sales collateral and when you're bidding a new job. But their applications and benefits extend far beyond simply marketing your company.

Drone technology helps Capps and his team save time, money and resources now and better estimate for future projects later. He can calculate real-time data on how much dirt has been cut and moved at a site and how much is left to fill. UAVs have also made it possible to make a 3D image of every asphalt plant site they have, collecting extremely accurate data on silos, volume and current inventory. Having access to this level of detailed, highly accurate data saves multiple trips to current sites acquiring data that will have to be reproduced at future sites once plants are moved.

“Prior to using a UAV, I would make multiple trips to a site, driving around on an ATV with my GPS and picking up elevation changes only every 50 feet. With the UAV, I'm now picking up shots every two inches over the entire site,” noted Capps. “I'm finding way more accurate dirt totals than I've ever been able to. If the original baseline was estimated at 30 feet, but the drone shows me a real-time accurate total of 35 feet, 5 feet of dirt over 25 acres is a lot of money,” said Capps.

For similar applications, one drone can save hours and sometimes days of work. In Capps's experience, it took two hours to acquire data points on a 40-acre site using traditional surveying equipment. With the UAV, he can fly the same site and map multitudes of real-time data in 12 minutes and process that data to give contour lines in less than two hours.

In many sites and locations, safety is a huge factor that goes into how shots are taken and data is compiled. For example, in a recent research study, “The Truth About Drones in Construction and Infrastructure Inspection,” unmanned aircraft have a distinct cost and safety advantage over using people on ropes, ladders, scaffolding and bucket trucks for inspections.

Capps shared that his job often requires him to calculate the volume of material in rock quarries and stockpiles, areas with unstable footing, precarious structures and dangerous settings. “I've been on top of 2-and 3-story piles of loose rock, climbing up and down in these places, to get the data I need,” shared Capps. “UAVs have completely changed the way we think about calculating piles and pits, eliminating potential safety hazards to me and my crew.”

When first researching UAVs and their potential benefits, Capps was initially wary whether such a system would work in this kind of application, much less whether the data procured would be truly accurate. When he initially began using UAVs, he would still do a traditional survey in addition to flying the site. However, he soon found that using drone technology allowed him to gather more data with better accuracy than he ever could with any other manual method.

“I thought maybe we would get a pretty picture and data might be close to real-world calculations, but had no idea it was going to gather data with such extreme accuracy,” said Capps. “I'm amazed how the drone and software pulls everything together with little manual direction. It has provided a surprising level of autonomy I wasn't expecting.”

4. Don't Fight the Future, It's Time to Take the Latest Technology Leap.

Capps recalls having apprehension in the late 90s about working with GPS systems. While many were initially reluctant to adopt the technology, it's now an essential item in every surveyor's hand. According to Capps, “I think UAVs are going to be the next GPS. Don't fight the future, it's going to happen – and UAVs are the future!”

5. Don't Let Technology Hold You Back

Hanging on so tightly to your traditional toolbox with your hammers, nails and screws that you're letting technology hold you back? If you're using any type of machine control on your job sites, UAVs are an easy addition to integrate into your toolbox. Drone technology and analysis software prices are coming down and stabilizing and are very easy to learn. So don't let technology hold you back….it's time to explore how you can use UAVs to track progress and speed production on your job sites for a competitive edge.

Greg Crowder is the co-CEO of Go Unmanned, a division of Benchmark Tool & Supply Inc.— Special to CEG