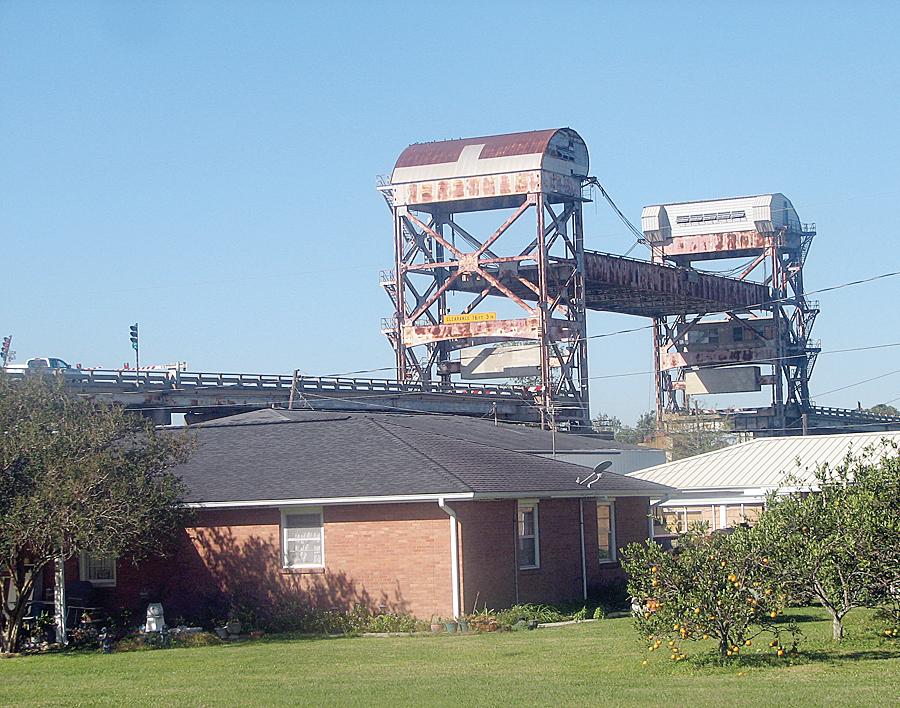 In the fall of 1961, Gov. Jimmie Davis and his back-up vocal group, the Plainsmen, sang “You Are My Sunshine,' and “Peace in the Valley' to open the $1.5 million West Larose Vertical Lift Bridge on La. 1 in Lafourche Parish.

The people of Larose and nearby Cut Off so welcomed the bridge's arrival in October 1961, that after the ribbon-cutting on the bridge's deck, the towns held a parade from the bridge to a nearby high school stadium, news accounts from the day said.

High school bands led the way, and Davis and his wife rode along in an open-top convertible. Davis and others sang and gave speeches to mark the day, according to accounts in the Lafourche Comet and Lafourche Weekly Press.

For more than half a century, the lift bridge's middle traffic span has been raised 73 ft. (22 m) in the air, stopping road traffic, when boat traffic must pass through on the east-west Intracoastal Waterway.

Now the once shiny new bridge located in the heart of south Louisiana's coastal oil patch is in the middle of a major $24.2 million rehabilitation, state highway officials said.

Begun in the summer of 2015, the repair job has led to numerous closures to car and truck traffic and more extended closures of weeks to months-long are coming this year as crews turn to rehabilitation of the mechanical and electronic equipment that raise and lower the bridge deck, highway officials said.

During that time, the bridge will have to remain open to water traffic and closed to cars and trucks, causing backups and forcing them to reroute to a nearby high-rise bridge on La. 308.

“You have to shut it down. Now all this work, it obviously takes a good bit of time, so that's why in the specifications, the contractor was required to do this not during hurricane season. So that's why they're getting this stuff started right now,' Christopher Rogers, a state Department of Transportation and Development project engineer, said in an interview in December.

While some local officials say the work is needed on this link in the La. 1 corridor that is so important to the nation's oil and gas production and critical for hurricane evacuation, residents and other officials aren't as excited as their predecessors were that October day 55 years ago.

A lifetime of always seeming to catch the bridge when the deck is up, with barges and tugboats inching by and drivers waiting to get to school or the grocery store, hasn't endeared the venerable bridge to Larose residents, some of them said.

“The bridge is a pain in the ass. We try not to think about that bridge,' an only half-joking Lafourche Parish Councilman Jerry LaFont, who lives on the south side of the bridge, said.

Rising 110 ft. (33.5 m) in the air, the metal girder bridge's twin towers, with their tear-drop tops, form part of a familiar, industrial backdrop in this part of Louisiana.

Bridges must make way for the fishing and off-shore supply and crew vessels plying local waters on their way to the Gulf of Mexico. Lift bridges have often been the answer.

In fact, the heart of Larose could be said to be water — the intersection of Bayou Lafourche and the Gulf Intracoastal Waterway. The four corners of town are divided by those two waterways and are tied together with three lift bridges, including the West Larose bridge, and the high-rise overpass east of Bayou Lafourche on nearby La. 308.

For some, the West Larose Vertical Lift Bridge doesn't hold a place in their hearts as a town landmark as the Larose Civic Center, Double D restaurant or Elaine's sno-ball stand do.

“I just use it to get on the other side of the Intracoastal. Ha. To me, it ain't no sentimental [thing]. You have no choice,' said Edward Lambas, who lives in the shadow of the bridge near its northern approach. “That's a bridge, and it's always open for boat traffic.'

The bridge, which was the topic of state highway planning going back at least to the late 1940s, had faced opposition from shipping interests in the early 1950s because it would have put a vertical limit on the height of ships in the Intracoastal.

But the funding came through after a push from Lafourche Parish state Sen. A. O. Rappelet in late 1950s and construction began in mid-1959 under then-Gov. Earl K. Long. It was finished under Gov. Davis two years later and replaced an old pontoon bridge.

By 2015, the bridge had severe rust spots on its superstructure and had been rated as structurally deficient by the state, federal bridge data show.

Bambi Hall, a DOTD spokeswoman, said the rating was due to “advanced corrosion on key structural steel components of the superstructure.'

She said the state had originally intended only to paint the bridge and upgrade its mechanical and electrical components, which is work movable bridges need every 40 to 50 years. Structural repairs were added once DOTD inspectors found deficiencies that would have required the bridge to be weight-limited in the future, Hall said.

On a recent chilly December morning, as the wire ropes that raise the bridge deck rattled together in high winds, Rogers, the DOTD project engineer, led a tour of the bridge with its new beige paint job.

Rogers showed how the state replaced old steel girders and rivets with new bolts. Contractors also have replaced timber fenders that protect the base of the bridge with new concrete ones that are far stronger and more able to withstand strikes from barges and vessels, Rogers said.

Workers were preparing, he said, to refurbish the electric motors, large circular gears called sheaves and other equipment that raise the bridge deck with the help of massive counterweights hanging inside each bridge tower. Additional girder repairs and replacements also are planned, as well as a complete upgrade of the controls and electronic brains that actually direct the bridge deck's movements.

Some Larose residents, like Lambas and others, pointed out that several years ago, local leaders had talked about a new high rise bridge over the Intracoastal on the west side of Bayou Lafourche that would replace the West Larose bridge. They wondered why the state wasn't building that bridge instead of rehabilitating the lift bridge.

Henri Boulet, executive director of the La. 1 Coalition, a group of business interests pushing to improve access to Port Fourchon, said the long-term goal has always been to link La. 3235 south of Larose with U.S. 90 with a four-lane highway. A new bridge over the Intracoastal would be part of that linkup.

But he said with subsiding land father south on La. 1, the coalition is focused on the lower stretch of La. 1 first, a big undertaking in its own right. Boulet said his group favored DOTD upgrading the lift bridge at this point to avoid the backups that the West Larose Lift Bridge has had in the past during mechanical failures.

“We are in favor of them maintaining that structure to a reliable state,' Boulet said.

He pointed out that a lot of 18-wheeler traffic has already switched from La. 1 to nearby La. 308 with the construction of a new $33 million lift bridge over Bayou Lafourche just south of Intracoastal Waterway in Larose.

Hall, the DOTD spokeswoman, said there are no current plans for a new bridge in Larose over the Intracoastal. —The Advocate