Cellulose-Infused Concrete Is One Step Closer to Reality 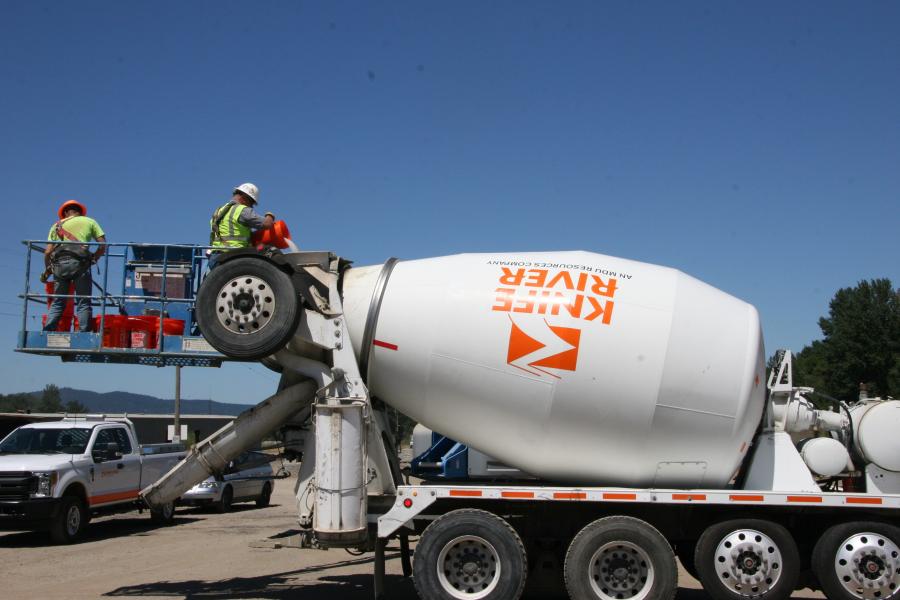 Results from the test pour are still being analyzed, and they will be used in the construction of a precast bridge deck that will be installed early next year in Yreka, Calif. (Michael Goergen photo)

On a sunny summer day at Oregon State University, before an audience of researchers and representatives from the construction industry, a Knife River-owned ready-mix cement truck poured a batch of concrete. By all appearances the concrete looked similar to concrete poured at a construction site with one notable exception. This concrete had wood in it — more specifically cellulose nanocrystals (CNC). If this test batch of concrete yields the same strength and curing results in a real-world setting as has been found in the laboratory, CNC very likely could be a gamechanger for the concrete industry.

“He was out there telling people the wonders of nanocellulose, and I was one of the people that bit the worm on that line,” he said.

Creating nanocellulose requires a two-step process. First, wood pulp is reduced to its primary components of cellulose, hemicellulose and glucose. From this mixture and, by a variety of methods such as a bath of sulfuric acid, the cellulose is isolated. CNC are smaller than light and can only be seen by an electron microscope.

“Most people don't understand how big a nanometer is,” Youngblood explained. “A nanometer is to a human what a human is to the sun. That's the relative scale.”

One of the benefits of CNC are they are water soluble; the downside, said Youngblood, is that nothing is processed in water. Yet that didn't stop him from wondering what CNC could be dumped into. The answer occurred to him in 2010 while digging a posthole and mixing a batch of concrete, Youngblood recalled.

What shortly followed was adding CNC into concrete and seeing what happened. Youngblood and Moon recruited Pablo Zavattieri and Jason Weiss, both professors of Civil Engineering at Purdue University, (Weiss is now a professor of Civil and Construction Engineering at Oregon State University) to assist in interpreting the results. They were surprised to find that, in spite of their size, CNC strengthened the concrete. Youngblood recalled that Weiss pointed out that the nanocrystals were too small to behave as a mechanical reinforcement.

“When anything is doing something but you don't know why it's doing it because it's not following theory, that's usually a scientifically rich area,” he said.

The team obtained funding from the National Science Foundation to delve into the research further. After multiple experiments, they found the CNC behaved dually as a hydration modifier and a water reducer.

“Interestingly, CNC fundamentally change the chemistry at the interface,” Youngblood explained. “They primarily reinforce the high-density CSH [calcium-silicate-hydrate] and a little bit of the low-density CSH at that interface so you start seeing things like higher flexural strength. And the hydration is interesting. You get a small delay at first, but then the hydration rate goes up quite a bit so that you see most of the benefits at early strengths, such as three-day strength.”

The addition of CNC also resulted in a measurable improvement in flexural strength.

“Being able to improve the flexure strength is nice,” Youngblood said, adding that these benefits are obtained by adding low levels of cellulosic nanocrystals, such as 0.1 weight percent of CNC relative to the dry power to the mixture. “One of the reasons it is active at such low concentrations is because it actually absorbs to the surface of the cement particle. It's actually acting interfacially.”

A proponent of the team's research is P3Nano, a public-private partnership that is led by the U.S. Endowment for Forestry & Communities Inc. The partnership is “designed to help keep America's forests and forest-based economy healthy and sustainable through the development and use of wood-based nanomaterial for a wide-range of commercial products.” Michael Goergen is the director of P3Nano and vice president of Innovation for the Endowment, and what excites him about the research is twofold.

“They've reduced the amount of Portland cement in the concrete mix by fifteen percent through the addition of cellulosic nanomaterials and maintained the same strength as traditional concrete,” he explained. “That's important because the production of Portland cement produces a lot of greenhouse gas emissions. If we reduce the amount of cement in the concrete mix, we reduce the amount of greenhouse gases, which is a big deal in the world of concrete, and a good deal for the planet.”

In 2013, P3Nano began funding Youngblood and Weiss' research. In 2015, their findings on the CNC improving concrete's strength and hydration were published, and in summer 2017, the research was taken out of the lab and into the field.

For the real-world pour that occurred at Oregon State University, Youngblood described the operators as simply adding the CNC slurry in five-gallon buckets to the concrete mix.

“It wasn't what you would call a wonderful test pour,” he said. “But it was a success in that we learned some critical issues to be able to put this in the field.”

As a funder of the research and seeing it scaled up to a real-world use, Goergen said, “it was pretty exciting to be there and watch it all happen. There are a lot of people who were interested in the success of this effort. It is encouraging to see the motivation of the research team, and particularly the concrete producers. There is risk associated with any project like this and the team took it head on.”

General contractor Knife River, whose ready-mixed truck was used, was “excited about being part of the trial,” he added, “and I think that really shows a lot about both their willingness to be experimental and the relationship that OSU has with them.”

When speaking with folks at the event, Goergen found that what “got them most excited was this idea of reducing the carbon footprint of concrete. They felt really good about that idea. They said 'Wow, there's a real chance to make a contribution.'”

Concrete produces about eight percent of anthropogenic CO2, and four trillion tons are used worldwide. Currently, plasticizers are used to improve flow, which are produced from chemicals and are costly. In contrast, CNC is made from a renewable natural resource and can potentially reduce the costs of making the concrete.

As for whether CNC concrete performs the same in the real world as it does in the lab, Youngblood said they are analyzing the results, which will help inform the manufacture of a precast bridge deck that will be installed in Yreka, Calif., early next year. He is eagerly anticipating its installation since they will learn even more about how concrete with CNC will wear and respond to being exposed to the environment.

Other research the team is pursing is how each concrete formula, whether type 5 or type 1, will react with the addition of CNC.

“The degrees of benefit vary depending upon the specific system,” Youngblood explained, adding that they are working to understand “at the fundamental level why these things occur so we can predict it rather than react to it.”

And there will likely be future research for years to come if there is funding.

“We're investigating everything because there's a lot more that we don't know than we do know,” he said. “Cement and concrete have been used for thousands of years and Portland cement for hundreds of years, that's a large knowledge base. We've been using CNC in this stuff for less than ten years.”

Goergen said that for CNC to be adopted more widely, he sees several things as needing done. Number one is documentation.

“Contractors need to understand that by adding CNC to concrete, concrete still behaves as concrete — it pours like concrete, it cures like concrete. It behaves exactly the same way, they're not going to have to change processes or anything else. They're just going to add a different chemical in their mix,” he explained.

Number two is working with companies who manufacture plasticizers to explore manufacturing CNC instead, and third is scaling up production to fulfill demand. Youngblood said that in the research's infancy, it took two weeks to produce 20 grams of CNC.

With the U.S. Forest Service having built a $1.7 million CNC pilot plant in August 2012, “that's enabled us to buy it in pounds or kilo quantities so now we can develop the prototypes,” he said. “Now what we have to do is get to the next stage of let's take the prototypes into the field so someone can start marketing it and drive the production facilities.”

This leads to the question of how the CNC will be produced and used in the concrete-making process. Since shipping water is expensive, which essentially is what the CNC slurry is, Goergen envisions an onsite production plant at a ready-mix plant. Research also is under way to determine if the slurry could be dried and reconstituted on site.

Youngblood is optimistic about the eventual adoption of CNC in concrete.

“I really do think this can have a large benefit because it's almost tailormade for concrete because it comes in water. You don't need a lot of it; it's relatively cheap compared to [other plasticizers], and it works right out of the box,” he said. “We have massive amounts of biomass we can convert into CNC.”