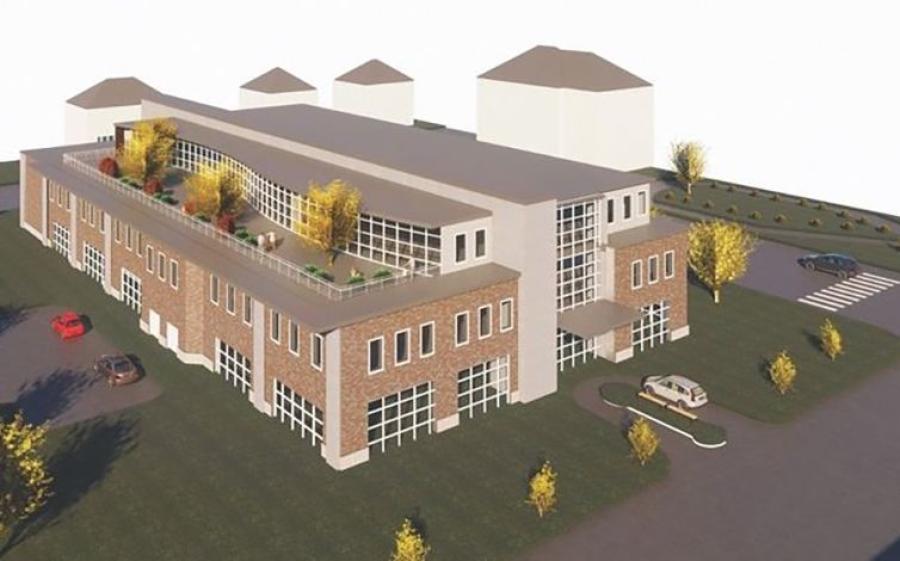 The center will consolidate radiation oncology, medical oncology and surgical oncology departments under one roof, as well as other specialties, including therapy, diagnostics, financial and nurse navigators. (Central Maine Healthcare rendering)

Construction began Nov. 2 on a $38 million cancer center expected to "be a life-saving difference" for residents of the county with one of Maine's highest cancer rates.

Central Maine Healthcare (CMH) held a ceremony Oct. 29 on its Lewiston campus in the parking lot where the 52,000-sq.-ft. building will go up, celebrating an achievement that's been decades in the making, hospital officials said.

The center "brings together comprehensive cutting-edge oncology care from diagnosis to treatment in one consolidated facility that allows for coordinated care in a way that we've never been able to provide before," said CMH CEO Jeff Brickman.

"This is a momentous day, it's a milestone for this first-of-a-kind health care project, and for our drive to provide world-class care close to home for the people in Maine who we serve," he added.

Brickman lauded the CMH team, including oncology doctors who have pushed for a better overall approach to care. Because of them, and the system's board of directors, "We can change the face of how health care is delivered within the state of Maine," he said.

The center will consolidate radiation oncology, medical oncology and surgical oncology departments under one roof, as well as other specialties, including therapy, diagnostics, financial and nurse navigators.

The new cancer treatment facility also will allow the addition of two new linear accelerators, which provide advanced radiation treatment; the old space didn't have room for the new technology.

The CMH Cancer Center required years of planning to combine oncology services, which are currently scattered across the downtown Lewiston campus of Central Maine Medical Center (CMMC). Some of those facilities are as far as three football fields away from one other.

Steve Littleson, president of CMMC, noted that it's been 10 years since a new building was constructed on the campus. The new cancer center will replace "aging buildings that don't support much advancement in technology."

The hospital's oncology-related services have close to 43,000 patient visits a year, Littleson said. That means the staff is seeing an average of 36 cancer patients an hour, year-round.

"We know that one in four Mainers will face a cancer diagnoses in their lifetime, with over 8,000 being newly diagnosed each year," Littleson explained. "Maine is the 12th-highest state for cancer mortality in the country. Our objective with this new, awesome facility is to put a serious dent in those numbers."

The cancer treatment center will be built on High Street, at the corner of Holland Street and next to CMMC's main entrance. It's expected to be completed in mid-2022.

In the audience for the project's groundbreaking were Nathan and David Batemen, of Bateman Partners LLC, the developers of the cancer center. The Portland company will own the facility and lease it to CMH. The firm also built CMH's Topsham Care Center and its Lewiston urgent care center, which opened in March. Bateman Partners also is the developer of a Topsham ambulatory care center that's now under construction.

The architect for the CMH Cancer Center in Lewiston is MBH Architects, which has offices in New York and San Francisco.

The cancer treatment facility, the Topsham and Lewiston urgent care centers and the Topsham ambulatory care center are all part of CMH's ongoing effort to consolidate services and make health care costs cheaper to provide and cheaper for patients.