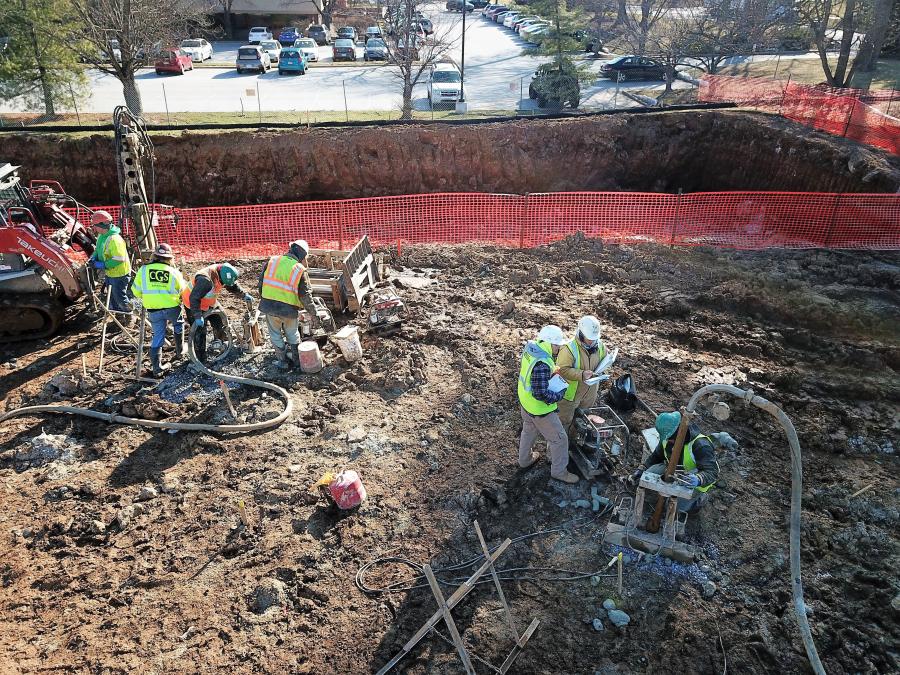 Most of the grout ports were clustered on the southern and northeastern quadrants of the site.

A lone drilling rig hammered away on a muddy, puddle-laden King of Prussia, Pa., construction site on an unseasonably cold April morning. Future residents of the 5-story, 248-unit suburban Philadelphia apartment complex would someday shuttle back and forth to the various amenities in this bustling community, but no structure could rise from the ground until Compaction Grouting Services Inc. (CGS) performed its namesake service to tame the poor subsurface conditions.

“This whole town is basically a big sinkhole,” quipped Steve Oxendine, CGS supervisor. His experience has been that addressing subsurface issues during pre-construction is far more cost-effective than doing so post-construction.

EEI confirmed that this site was a candidate for compaction grouting following test bores in 2004 and 2016. This sinkhole-prone parcel is underlain by dolomite, a type of carbonate rock prevalent in King of Prussia's geology.

The compaction grouting process consists of injecting a low-slump, low-mobility, soil-cement grout at high pressures to compact loose, coarse-grained soils and densify and/or displace soft fine-grained soils. A grid-like pattern — pre-determined by a geotechnical engineer — is positioned across the site. Grout columns are then injected into the hole locations within the pattern.

The apartment building complex will have a 65,000-sq.-ft. footprint founded on spread footings with a partially underground parking garage. CGS drilled 18,061 linear ft. at more than 626-hole locations and pumped in 820 cu. yds. of grout in total. Some areas of the footing will rest directly on bedrock. When rock was 6 ft. or less below the surface, it was dug out and backfilled with lean concrete.

CGS helped to prevent excessive excavation by test drilling in zones where it was suspected that more than 8 ft. of digging would be required because of a rock drop-off. In those cases, compaction grouting was a better choice.

Determining the location of additional holes was a fluid process that involved ongoing test drilling and coordination with EEI, according to Justin Terry, senior project manager. “It wasn't hard set,” he explained. “We were working closely with and feeding the engineers a lot of drilling information to help determine if additional areas needed to be grouted.”

The nature of compaction grouting means that CGS crews are accustomed to muddy job sites, but an unseasonably cold start to spring in Pennsylvania with multiple Nor'easters turned the site into a mud basin. Further complicating matters was that CGS crews were frequently working in areas of low relief, causing them to deal with most of the site's surface water runoff including rain, snow and a tire wash.

Mike Miluski, CGS vice president uses words like lake, pond and swamp to describe site conditions. He recalled one of the firm's trucks halfway immersed in one such body of water. CGS relied on dewatering equipment to dry out the puddles and air compressors to blow off the snow.

“We always deal with mud,” Oxendine said.” With compaction grouting you never have ideal sites.”

A large excavator dug a trench in one corner, an idling articulated hauler had its tires blasted with a pressure washer and oversized truckloads with corrugated pipe rumbled down the road as members of the CGS crew made their way back to the drill rig. While the foundation work was unable to start until CGS finished compaction grouting, the project site was crowded with various other trades trying to get a head start where they could.

A Multitude of Tightly-Spaced Holes

The site was crowded by more than workers and equipment. The sheer volume of holes in such a tightly packed area meant that CGS crews would not be able to address every other hole. No hole within 8 ft. could be touched within 12 hours so they were required to grout every third hole. Most of the grout ports were clustered on the southern and northeastern quadrants of the site.

Oxendine, who supervised the project from the front lines, considered managing the quantity of holes in the condensed area the greatest challenge.

“The paperwork was daunting,” he recalled, noting that it was critical to cross-check the plans and survey stakes to stay organized.

Keeping the stakes in place and undamaged was also difficult as the various trades on site navigated the obstacle course on foot and in machinery.

The first step was to drill 3.5-in.-diameter holes. The next step was to drive in 2-in. inside diameter temporary casing with a bullet point on the bottom. The tip was then intentionally knocked out by yanking a rope from ground level to avoid clogging the hose with grout. It remains in the ground indefinitely. The casing was then pulled out, cleaned, and reused repeatedly.

The original spec required CGS to drill 3 ft. into bedrock, which lied at varying depths from 15 to 60 ft. Drilling was cut off at 50 ft. if no rock was encountered. Excavation on one corner of the site turned up 5- to 6-ft. boulders, some of which jutted out from stockpiles and embankments around the site. CGS had to bore an extra 2 ft. in this zone to ensure the drill was hitting bedrock.

“It's [grout] tightening up the soils as we pump,” Oxendine hollered over the machine gun-like hammering of a nearby drill. “The pressure surge [maximum injection pressure], on this job is 500 psi. That's a lot of pressure pumping all that grout down in there and compacting that soil.”

The site contained a mix of dense clay soils and softer karst conditions. Miluski noted that a normal soil profile would typically increase in strength with depth. With karst conditions, the dense clays are up top and the weaker soils are just above bedrock because of water flowing above the rock formation. 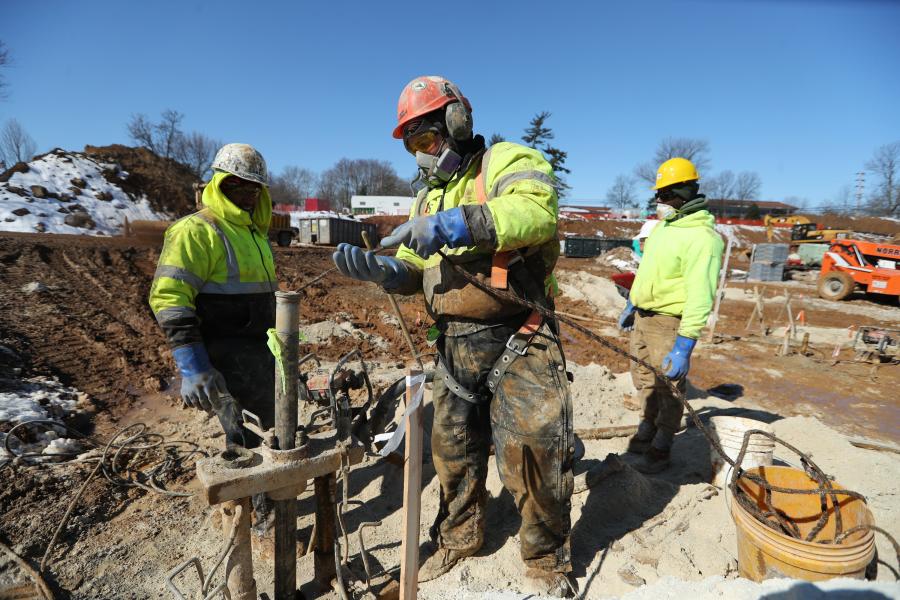 CGS crews pumped the grout in from 100 to 500 psi, although the average was 300. More challenging locations took 5 cu. ft. on average while locations that encountered the unvarying terrain required about 2 cu. ft. per ft.

“The higher psi tells you that the soils are pretty good or you're in rock,” Miluski explained, adding that a significant number of holes took less grout since the rock was higher than anticipated. “The soil has been relatively good and that helped our schedule.”

CGS generally pumped 20 to 50 cu. yds. of grout per day while utilizing two to three crews. The grout was produced using a mobile mixer with sand and cement in the hopper and a 500-gal. water tank hooked up to a Putzmeister grout pump. This pump is specifically designed for injecting grout at high pressure. 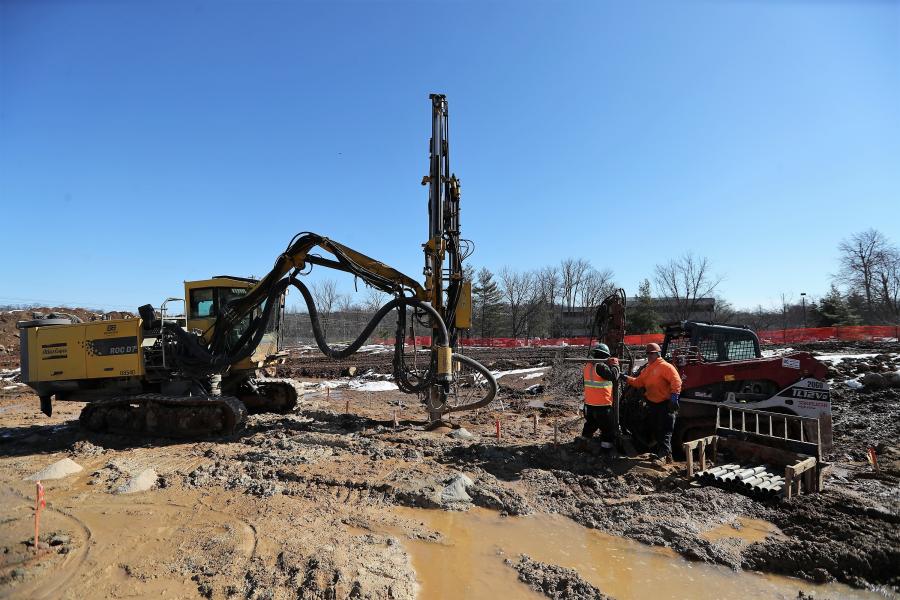 “We were averaging between 15 and 20 holes a day,” Oxendine recalled. “At one point we had three pumps and two mobile mixing trucks going at the same time because some of these holes were 50 to 60 feet deep.”

The mix of water, cement, and sand is crucial in compaction grouting, according to Miluski. The specification called for a 300-psi compressive strength and 8 to 10 percent cement, a relatively standard specification.

Due to CGS' experience he stressed that the gradation of the mix is what really counts. “The more cement you have, the more it travels in the ground,” he said of the grout. “You want it to be like a growing mass.”

So #8 crushed stone (3/8- to 1/2-inch) was added to prevent the viscous grout from seeping into rock fissures.

“This isn't a unit job,” Miluski said, looking out over the site. “There's serious risk involved in giving a hard number.”

It was initially a unit price project until CGS offered to bid it lump sum as the company does on many compaction grouting projects. This helped to mitigate risk and instill assurance and confidence for its western New York-based general contractor LECESSE.

Justin Terry agreed. He believes there are other subcontractors that could have done the work, but doubts that they understand compaction grouting well enough to bid the project lump sum.

“It's really a crapshoot,” he explained. “How deep are we going to have to drill? How much volume [of grout] are the holes going to take? As an owner who's not as familiar with it, it's scary for a lot of them to think that they have the exposure of a possible $100,000 swing.”

It is not uncommon for compaction grouting projects to have 10 to 20 percent swings when comparing estimated drilling and grout volume quantities to actual quantities. Spread over a large magnitude (600-plus grout locations), the associated additions and deductions associated with unit costs can kill a project budget or sink a contractor. By providing a lump sum, CGS eliminated the risk for the owner while betting on its own knowledge, experience, and production

Finishing Ahead of Schedule

Project delays up front put CGS on the site in February at the tail end of a cold winter that would bleed into a chilly spring. The crew geared up, working through snow, rain, and chilly temperatures amidst knee-deep puddles, mud and the occasional snow mound.

In addition to schedule adjustments, tight working quarters and excessively muddy conditions, a sinkhole opened where foundations were founded on rock in an area where grouting had not been performed. Due to experience and CGS' onsite mobile mixing grout trucks, they were able to immediately mitigate this sinkhole by adjusting the grout mix to pump in high-mobility grout. There was no need to wait for cement delivery or a neat cement mixing truck to arrive on site.

The pressure stayed on as the contractor that would be constructing the footers bore down on the CGS crews. Despite the challenges, CGS delivered the job a day earlier than expected. This was meaningful on a 40-day project with the aforementioned variables. Not to mention, CGS took on an additional 13 holes at the engineer's request and improved upon its track record of completing a job on time.

“It's a big job, but we try to do it as fast as we can,” Oxendine said of the 12 workers that make up his crew. “We work long hours and we get it done.”