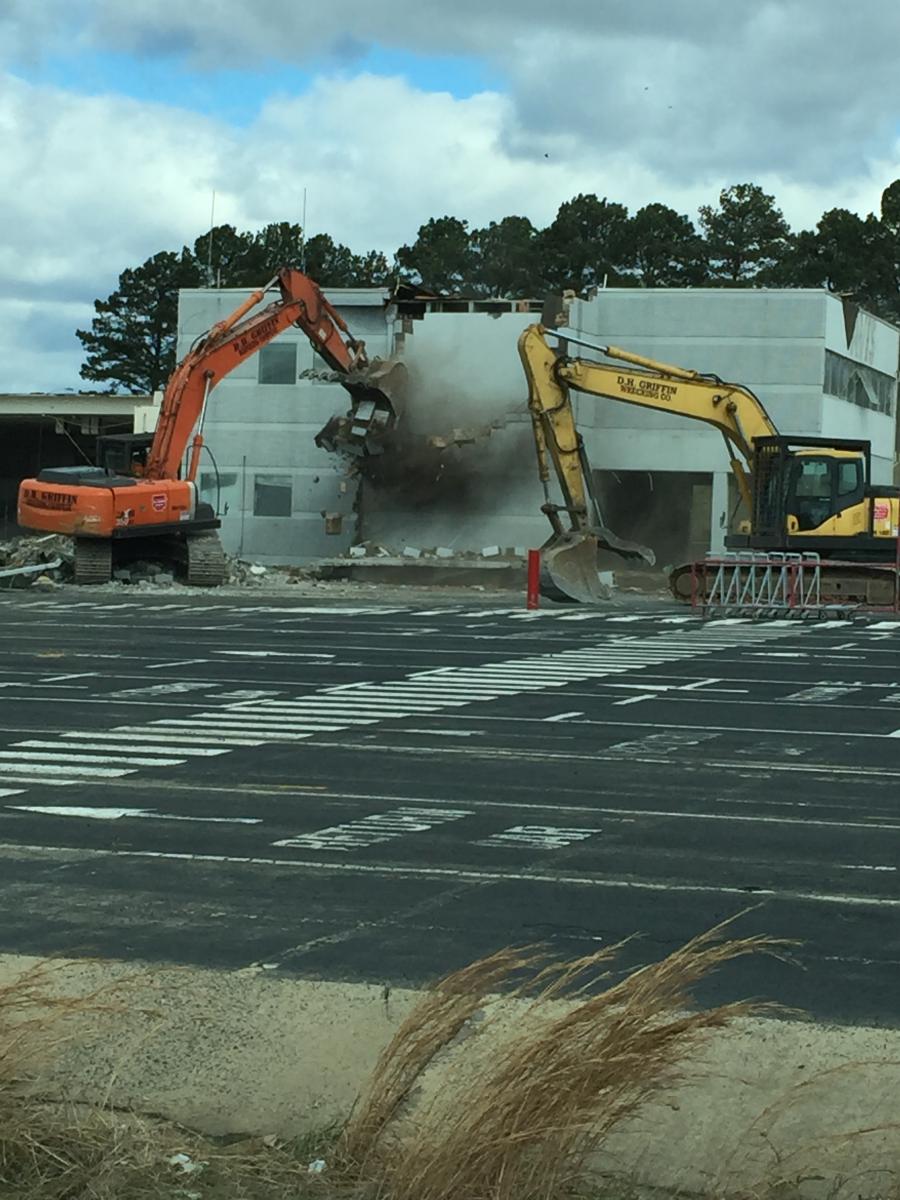 In North Carolina, a dramatic transformation of Charlotte Douglas International Airport (CLT) is gradually unfolding, as teams prepare for the next stage of the building process. The recent demolition of the rental car structures has paved the way for construction of the airport's newest gates, with safety a high priority during the tear down.

“The site was fenced separately from the airfield and outside the SIDA area,” said Scott Houser, chief CLT airport construction inspector. “Multiple access gates to the site were kept locked, and the contractor used a single point to access. Contractor personnel where posted at the gate to keep records of trucks entering and leaving the site with recycled materials. This person also kept cell phone parkers from entering the site.”

Over the last 20 years, CLT has become one of the busiest airports in the world, and is currently at or near capacity. Recently completed airfield capacity and terminal capacity enhancement studies examined possible and potential passenger growth forecasts, and formed the airport's master plan. The plan defines the future and long-term airfield and terminal development, while also shaping CLT's construction and development through 2035.

The new concourse is on the site of the former airport car rental facility, north of Concourse A. The vehicles, fueling stations and offices have been moved to the parking deck and a new satellite facility on Wilkinson Boulevard.

The concourse is one part of Destination CLT, a $2.5 billion plan that will guide airport expansion into the 2020s. CLT has seen its traffic grow rapidly, first as the busiest hub for US Airways, and now as the second-busiest for American Airlines.

Jack Christine, deputy aviation director, described the demolition as another milestone in the airport's development. Work began in February 2016 and was completed in mid-April. A total of 12 buildings/garage structures had to be torn down, along with 19 attached/unattached metal canopies. The canopy demolition required an excavator to pull the structures to the ground. Metal sheeting was pulled off and sorted according to material type. The remaining steel canopy structure was sliced into smaller sizes by cutting crews using torches.

“The buildings were first remediated of any asbestos,” said Houser. “Demo began with removing the masonry. The operator would typically remove a wall, then reach in the excavator bucket to sweep back and forth to knock down interior walls. Then, he would pull the debris out and sort through it to separate metal, wood and masonry.”

Houser said leftover materials such as steel, aluminum, copper and masonry/concrete were dealt with accordingly.

“All recyclables were moved to sort piles for haul away. During windy conditions, water would be sprayed on the demo area to keep dust and debris from blowing away.”

Two tracked excavators with hydraulic thumb attachments were used on the job, along with a skid steer loader with a broom attachment for cleaning. During the construction, ground water monitoring wells had to be closed, along with fluorescent bulb removal. Crews also had to remove underground fuel tanks and clean the soil to make way for the expansion of Concourse A.

“Previous soil borings indicated contaminated soils in the areas of the USTs,” Houser said. “The tank access points would be exposed. A HAZMAT recovery truck would remove any remaining product.”

Soil samples were taken in the around the perimeter of the tank. Soil removal would begin in the areas of high contaminate readings. The contamination would be chased by removing the soil until reading dropped to acceptable levels. Sampling was performed by an environmental firm hired by the contractor per the contract specifications and verified by an on-site environmental firm hired by the airport.

Officials said the aviation department has worked closely with airline partners and others to develop the plan, and will quantify benefits and costs of additional development and define the phases of development.

Destination CLT encompasses the first phase of a recently completed master plan update, a collaborative effort with airline partners and the FAA. It represents a significant capital investment in capacity enhancement projects.

Construction is under way on the elevated roadway and terminal curb front. Because the airport has experienced so much growth, it has taken a toll on the existing roadway system in front of the terminal.

A three-year project, construction began in winter 2015 and should be completed by summer 2018, at a cost of $50 million.

Concourse A expansion —Phase I calls for nine gates north of Concourse A to accommodate expanding air service and replace several existing gates. The two-year, $200 million project also includes construction of the concrete ramp and taxi lanes needed to operate the new gate. Work is expected to wrap up in 2018.

The East Terminal expansion — Phase II project plans for a three-level addition of approximately 51,000 sq. ft. (4,738 sq m) at Concourses D and E. The addition will provide an area for multiple concessions on the departures/ticketing level and will double the current number of escalators and elevators. It will upgrade passenger circulation to Concourse E. Currently, two escalators, one elevator and a narrow stairway convey passengers from the main terminal to Concourse E. The addition of three escalators, one service elevator and a widened stairway will significantly increase the traffic flow to the concourse.

Other components of the expansion include a service dock area for Concourses D and E, a food court, restrooms, a mother's room and animal relief areas. There will also be approximately 12,000 sq. ft. (1,114 sq m) of office level space for future space requirements of the various tenants. The $29 million, two-year project should be completed by summer 2018.

CLT's terminal building, constructed in 1982, is in need of an update. Improvements will include terrazzo to replace carpet, wall finishes, new ceilings, a new public address system and improved LED lighting. Work will reportedly begin first in Concourses A and B, and move to Concourse C and the atrium. Construction should start in September 2016 at a cost of $55 million, and is expected to last three years.

The project will shield passengers from the elements, decongest hold rooms and heighten security and safety with boarding bridge equipped gates. The expansion also will allow larger regional aircraft to utilize the concourse due to the rising elevation on the north end and up-gauging of regional aircraft. Construction starts during the summer of 2016 and should be finalized by 2018, with a price tag of $12 million.

The planned terminal lobby will be expanded to the north.

The three-year, $247 million project will accommodate the growth CLT has experienced in recent years, which has put a strain on the terminal. Construction should begin in 2018 and be completed by 2020.

The air traffic control tower project is under design and will be funded and constructed by the FAA. The new tower, to be in commission in 2020, will be built on the south side of the airfield. When completed the new tower will be 367 ft. (111.8 m) tall, the second tallest in the country. The current FAA tower is 150 ft. (45.7 m) tall. The new tower will provide air traffic controllers with a bird's-eye view of the airfield. An 850-sq. ft. (78 sq m) cab will sit atop the tower, and a 42,000-sq. ft. (3,901 sq m) base building will house the terminal radar approach control (TRACON). The building also will include training rooms, administrative offices and a power distribution supply system.

Regarding other construction plans, an Environmental Impact Statement (EIS) must be completed prior to design and construction of a fourth parallel runway.

The runway will be located 1,200 ft. (365 m) west of Runway 18C/36C and between the existing runways 18R/36L and 18C/36C. It will include two end around taxiways and the relocation of portions of West Boulevard and Old Dowd Road. This fourth parallel runway is anticipated to be 200 ft. (60 m) wide and 12,000 ft. (3,657 m) long making it CLT's longest runway. Construction should start in 2020, with a completion date of fall 2022The projected cost is $422 million.Concourse A Expansion — Phase II is expected to cost $300 million, starting in spring 2020 and completed by 2022. It will continue expansion of Concourse A to the north for an additional 16 gates, while a planned Concourse C Expansion calls for the design and construction of 10-12 additional gates on Concourse C. The work is expected to take 20 months, beginning in 2022 and ending in 2024, at a cost of $463 million.