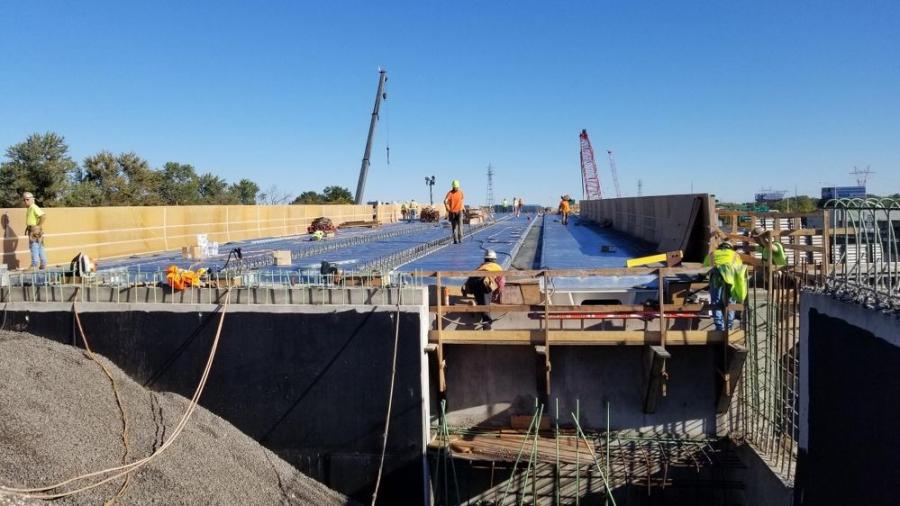 The delivery of the Connecticut Department of Transportation's (CTDOT) I-91 Charter Oak Bridge (COB) Project, a large-scale initiative that combines two projects to reduce congestion and improve safety in the city of Hartford, and towns of East Hartford, and Wethersfield, is less than two years away. 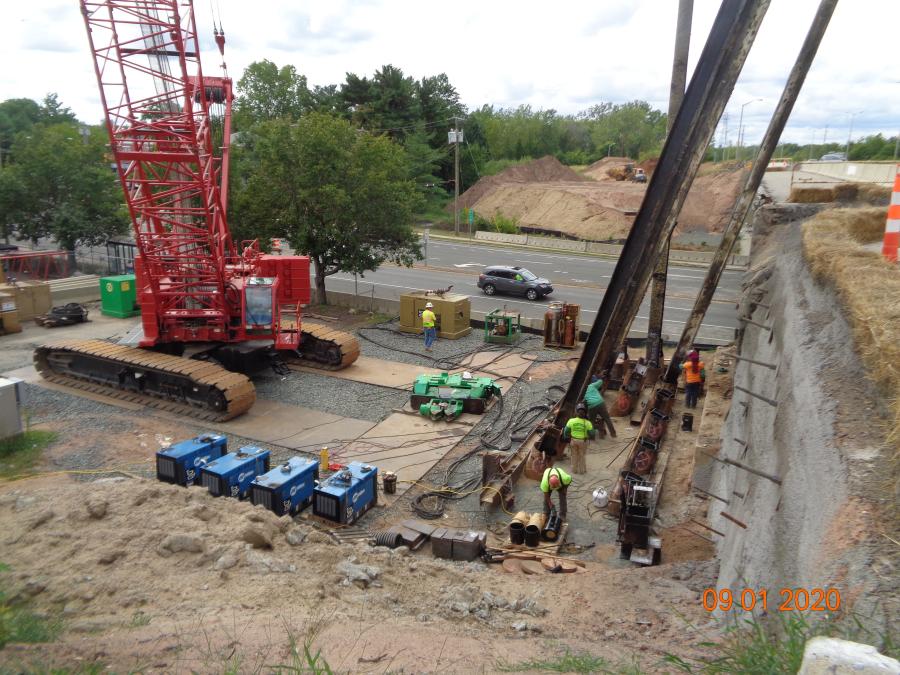 The contract, administered by CTDOT, District 1 and the Federal Highway Administration, was awarded to O&G Industries/Barletta Heavy Division, Joint Venture (OGBHD), at a cost of approximately $213 million. The project, which began April 1, 2019, involves multiple stages and an aggressive schedule with incentives for the contractor to not only finish on time, but ahead of schedule wherever possible.

The anticipated completion date is May 26, 2022. Project Consultant Inspection is being done by WSP, and the infrastructure was designed by CME Associates (CME) and HW Lochner (HWL).

The purpose of the project is to strategically target and alleviate recurring traffic congestion along I-91 northbound by constructing a new, two-lane exit-ramp to the COB (Route 5/15) at Exit 29 (Bridge 6947) in place of the existing, single-lane ramp configuration. It will replace — doubling the capacity and improving the geometry — the current operationally deficient ramp, well-known for creating traffic tie-ups on northbound I-91 and on the COB.

Congestion results in daily delays and safety concerns for motorists as traffic slows or stops on the highway. The project will relieve this bottleneck for roughly 80,000 drivers per-day by improving through-traffic capacity and reducing weaving maneuvers on I-91 northbound and on Route 5/15 northbound on the COB.

"This addresses safety concerns associated with congestion and operational shortcomings in Hartford and East Hartford at I-91NB Exit 29," said CTDOT Project Engineer Juan Ruiz. "Congestion, with queueing in the right lane of I-91 NB, has been observed to extend as far as approximately 1.4 miles. This is due the steep vertical grade of the existing Exit 29, with a significant volume of heavy vehicles and traffic volumes that are near capacity. In addition, the lane-drop from four, to three lanes, at Exit 27 contributes to this congestion; the northbound portion of the Charter Oak Bridge has experienced heavy weaving of vehicles entering from the I-91 Exit 29 with vehicles on Route 5/15." 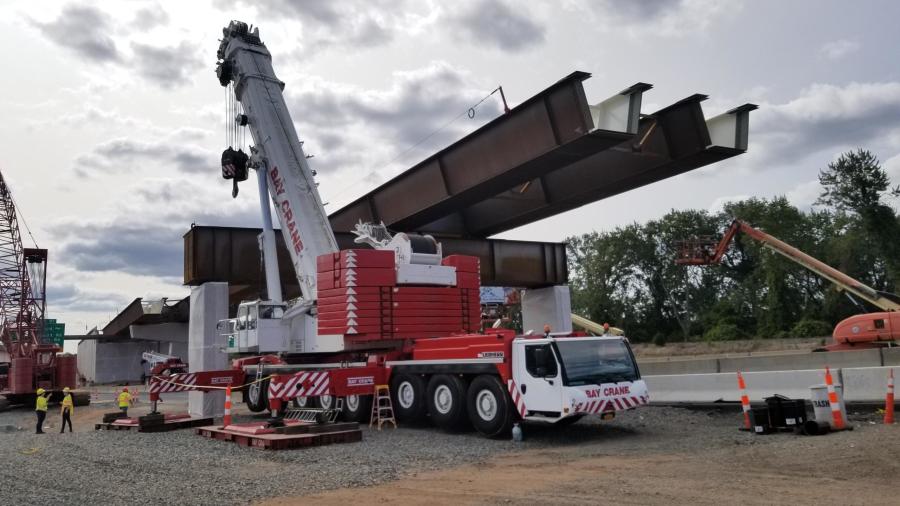 "The I-91 NB Exit 29 is being redesigned to be a major diverge, with two dedicated lanes for the left exit ramp to Route 5/15 NB," said Ruiz. "The new ramp will have added capacity and improved grades so that trucks can maneuver easier, and these changes will improve traffic flow and reduce recurring congestion."

"Considering the complexity of the project and the multitude of on- and off-ramps, the nightly lane closures and work zones, installed per-plan, are working very well," said Ruiz. "They are very clear and defined for the motoring public." 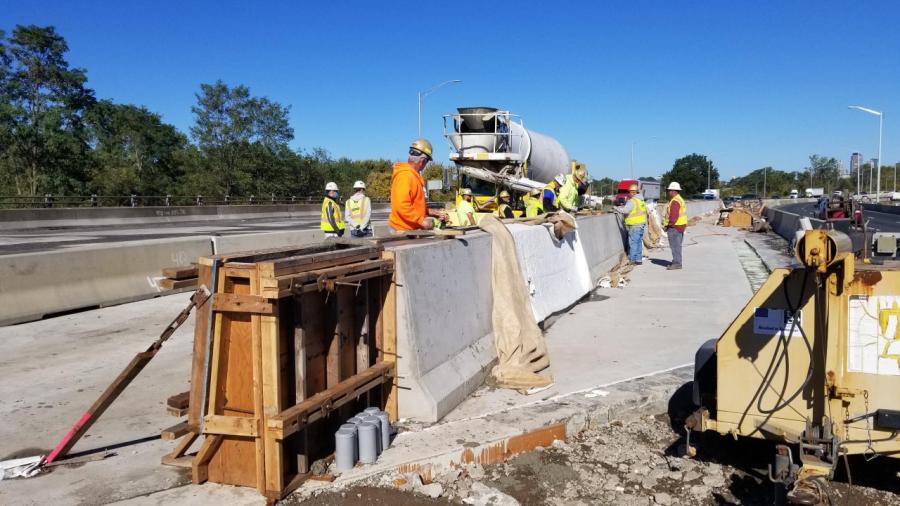 The interchange is within a heavily traveled urban corridor and one of the biggest challenges was to provide a design that could be constructed while maintaining traffic throughout the project site. Detours and lane closures are planned to avoid pattern overlaps and traffic volumes are monitored on a regular basis using Smart Work Zones (SWZ), which are applications of Intelligent Transportation Systems (ITS) utilized to help improve safety and mobility.

The new structures are designed for a 75-year design life.

The management and protection of traffic plan includes closures and detours, and daytime and nightly lane and ramp closures based on the work scheduled, such as paving and steel erection. To get materials and equipment on to the project site, the team uses the temporary lane closures and/or off-peak hours. CTDOT is maintaining all existing lanes during off-peak hours.

The joints on the COB consist of a molded rubber and a steel expansion joint unit, which accommodates structural movements and concrete headers. High strength aluminum wear-plates are molded into the top surface and grooved to provide skid resistance. The concrete header will be normal deck concrete, while the joint itself is rubber, steel and aluminum. While not exactly the same, the new joints are very similar to the existing joints.

The pavement surface on the Route 3 ramp is known as a High Friction Surface Treatment (HFST), composed of calcined bauxite aggregate that is bonded to the existing pavement surface with epoxy. HFSTs are increasingly used nationwide due to what many regard as superior friction characteristics. CTDOT is looking for further opportunities to use the material in additional areas that have a high friction demand.

For the roadway areas being widened, the existing poles, foundations and underground foundations are being removed and replaced, and new LED luminaires will be installed. In the areas where no roadway changes are occurring — I-91 southbound, COB, I-91 and the Route 3 Interchange — the existing lighting infrastructure will remain, but the high pressure sodium (HPS) lights are being converted to LED. Existing HPS under bridge luminaires are being converted to LED within the project limits. 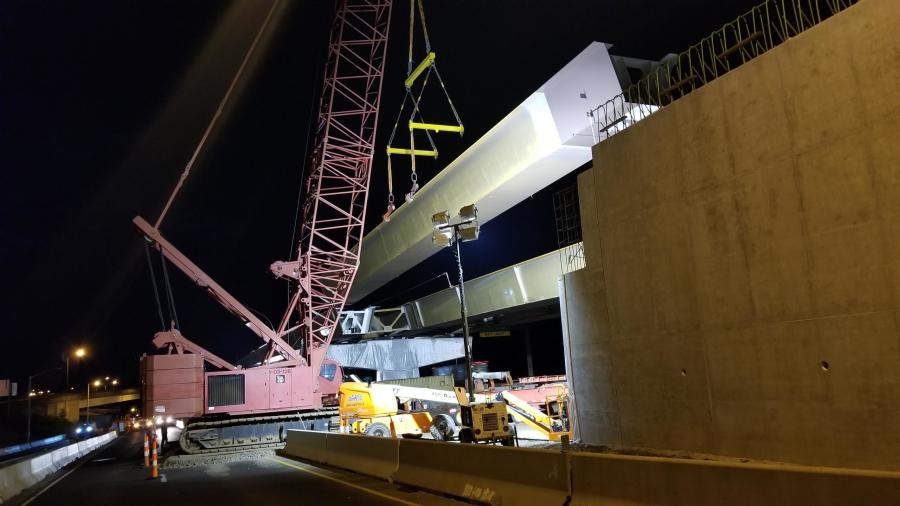 Michael Daley, OGBHD's project manager, who has managed several large projects, noted that the two JV partners have worked together on previous projects, and that the JV and CTDOT are united in ensuring the outcome is a success.

Thus far, the JV has completed the I-91 median from Cove Bridge to Route 5/15 Bridge, I-91 NB sign structures, I-91 concrete pavement repairs and substructure on bridges 6947, 6000, 0480 and 1466. The 2021 construction season will focus on opening the new I-91 northbound ramp to Route 5/15 northbound over the COB, completed I-91 northbound and southbound, including ramps and East Hartford Bridges at Silver Lane and Main Street.

The project has its challenges, including securing experienced construction workers.

"Obtaining and developing the best trade's people possible, while maintaining productivity, are our overall challenges," said Daley. "Without them, the work cannot get done or be done to the highest standards. General Superintendent Larry Doyon, Roadway Superintendent Bill Noll, Bridge Superintendent Bob Nardi, and Night Superintendent Ryan O'Halpin have done an awesome job of finding these trades people and training them for the future."

"They have been working with the unions and other sources to obtain the best possible trades people in order to get the work done with the best quality and safety in mind, while maintaining the schedule," he added. "They used a retired foreman to help train the new foreman and trades people not only to make sure this project goes well, but to build a future for the company. We give them all the credit. It's a real team-effort."

Soil issues are minimal, and water and utility issues were overcome with the assistance of the CTDOT, WSP and CME.

"Bill Noll has been key in coordinating all aspects of the night work and making sure they run smoothly and productively with the day work," said Daley. "This project has tight work zones. We work with CTDOT and WSP on each work zone to make sure we have the safety of the traveling public, as well as that of our own workers in mind."

Despite the many elements, Daley keeps his eyes on the prize. 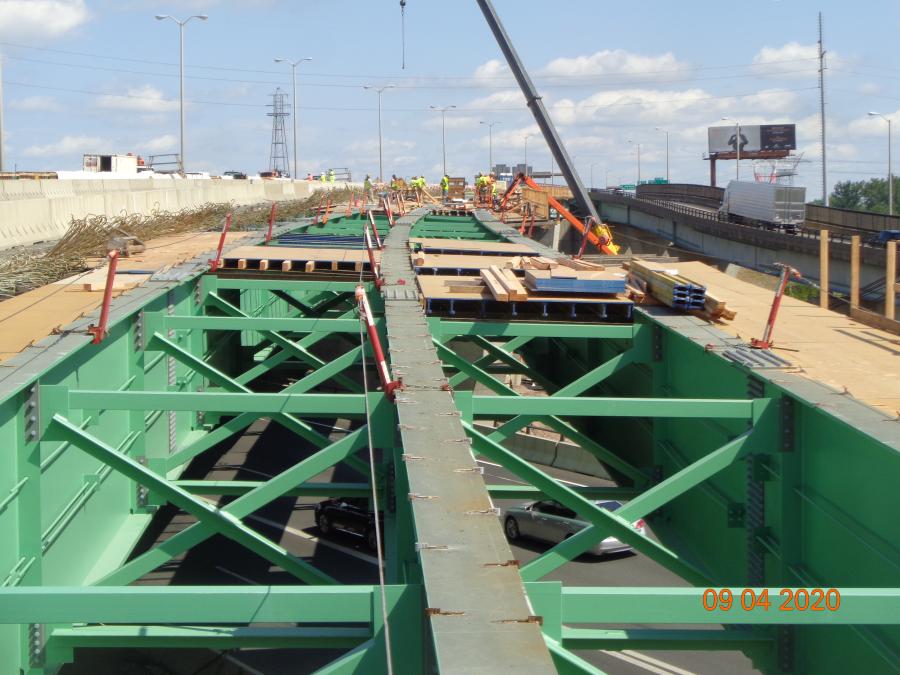 "The key construction activities are completing the first stage of the Charter Oak Bridge widening and the new off-ramp Bridge (6947) from I-91 NB to Route 5/15 NB by May 26, 2021," he said. "We have worked around-the-clock to complete these bridges this year so we can tie them in by next May. Challenges started with utilities, piles and bridge substructure — piers and abutment — and now have moved on to the bridge superstructure — the decks. Each activity was addressed with CTDOT, WSP and CME as the work progressed. Utilities were relocated, piles driven through caissons and bridge structures formed and poured."

Specialty equipment such as an ICE Auger 5550 for drilling and ICE vibratory and diesel hammers are helping push the project.

"We will be working through this winter to maintain the schedule," said Daley. "Any work that can be done in the cold weather will be done."

"The team is working well together," said Daley. "All work is done ahead of schedule and any issues that come up are addressed quickly to keep the project moving. The crews have been great, working safely and pushing through the work to stay on schedule while we deal with the current health issues."

Peak days have 220 construction workers on site, with local and regional subcontractors brought on board.

"We are reusing as much of the earth excavation as much as possible;" said Daley. "Recycling is very important to us, but due to the specifications, reuse of materials is limited."

Maintenance is crucial to ensure production is continuous.

"We have three mechanics on duty between the day and night shifts," said Daley, "and we keep tabs on the equipment on a daily basis and repair as necessary."

OGBHD purchases and rents equipment from dealerships such as H.O. Penn in Newington, W.I. Clark in Wallingford, and Shawmut Equipment in Manchester (all in Connecticut), and ICE Incorporated in Sayreville, N.J. CEG