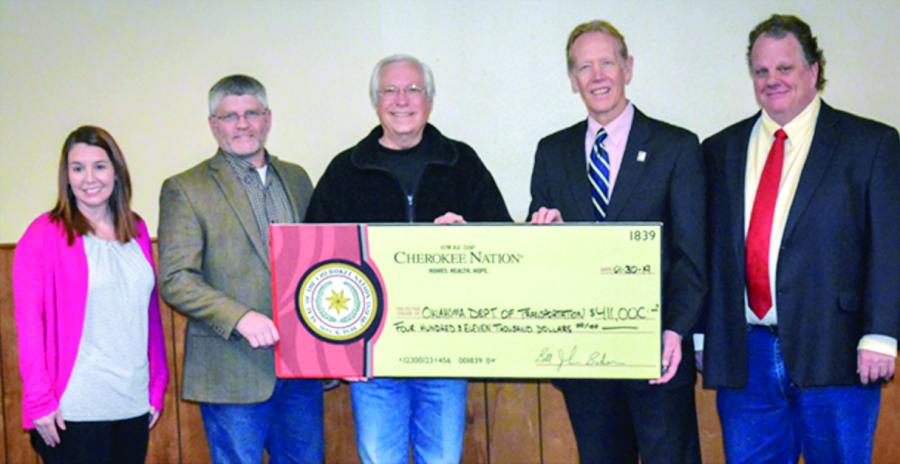 The Cherokee Nation and Oklahoma Department of Transportation are partnering to make safety improvements to an intersection on U.S. Highway 75 in Ochelata.

Between 2012 and 2017, 37 collisions occurred at the U.S.-75-W2900 Road intersection, including five that resulted in fatalities. The intersection improvement plan calls for the construction of "J-turns" in the corridor and a southbound deceleration lane on the highway to reduce the number of traffic conflict points and help improve safety.

"This intersection in Ochelata is an important route that provides direct access to Cherokee Nation's Cooweescoowee Health Center, where tens of thousands of patients are seen each year," said Baker. "Cherokee Nation is proud to work with the Oklahoma Department of Transportation to help prevent collisions and make this route safer for years to come. This is a great example of the strengths of a partnership between the Cherokee Nation and the state of Oklahoma."

The Cherokee Nation received the $411,000 through Tribal Transportation Safety Funds, which are set aside by the federal government each year to address transportation safety issues in Indian Country. Funds are awarded to federally recognized tribes through a competitive, discretionary program.

"We greatly appreciate the continued support of the Cherokee Nation to partner with us and improve the safety of Oklahoma's highways," Patterson said. "The J-turns will eliminate the need for traffic to cross multiple highway lanes to make a left turn, and instead give drivers a more protected area to turn."

Completion of the project is expected in early summer 2019.

"Working with ODOT to pool our resources is a great way to improve the lives of Cherokees and all residents in and around Ochelata," Lynn said. "We appreciate ODOT for working out the logistics and for providing additional funding resources for such an important project."

Aside from providing access to the Cooweescoowee Health Center, U.S.-75 services area-wide commerce traffic and will also be a direct route for visitors to the Washington County Cherokee Association's new community building, which is expected to be constructed this year near the Ochelata health facility.

Cherokee Nation's Ochelata highway project was one of 94 nationwide to receive Tribal Transportation Safety Funds. Cherokee Nation was also the only tribe in Oklahoma to be awarded TTSF for a specific project.