His company’s projects include the Deep Tunnel, Midway Airport, the 2012 reconstruction of Wacker Drive and courtroom improvements at the Dirksen federal building. 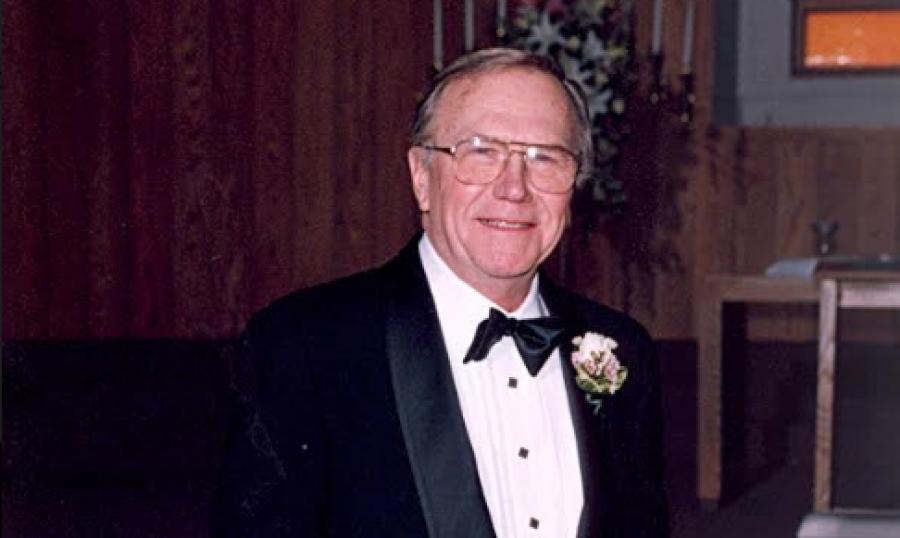 Bud Paschen's funeral is at a church he constructed, and his final ride to the cemetery will be on a road rebuilt by his contracting company.

“He was always very proud to drive on I-90 because of the construction project, even when he got stuck in traffic,” said Jim Blair, president and CEO of Mr. Paschen's firm, now known as F.H. Paschen, S.N. Nielsen.

Bud Paschen founded his company in 1975, but the family name has been linked to Chicago construction ever since the Great Fire of 1871, when his great-grandfather Christian, a German immigrant from Mecklenburg, used his tuckpointing skills to help rebuild the charred city.

Subsequent generations of Paschens had a hand in creating Senn High School, Navy Pier, the Chicago Theatre and the Carbide & Carbon Building, an art deco gem refashioned into the Hard Rock Hotel Chicago. They helped build the Thompson Center, the Dirksen Federal Building and the new McCormick Place. They also straightened out the treacherous “S” curve on Lake Shore Drive.

His own company's projects include the Deep Tunnel, Midway Airport, the 2012 reconstruction of Wacker Drive and courtroom improvements at the Dirksen federal building. It also handled renovations on the Blue Line; the Red Line's 95th Street station; 14 Brown Line stops; and the new Washington-Wabash station serving the Brown, Purple, Green, Pink and Orange lines.

Mr. Paschen, 80, who gave up smoking some years back, fought leukemia a few years ago, said Jim Blair, president and CEO of his firm. He died of a respiratory problem Monday at his home in Jupiter, Florida, Blair said.

Young Bud started in construction as a teen, working for Paschen Contractors, a company owned by his father and uncles, including Buzz Paschen, who married prima ballerina assoluta Maria Tallchief.

“Buddy Paschen was a regular guy who came from the ranks of laborers in the construction business,” said attorney Gery Chico, a former mayoral candidate and Chicago Public Schools Board president, whose firm did some legal work for Mr. Paschen's company. “He learned literally from the ground up.”

“Twenty-plus years ago he walked into my office wearing blue jeans and a flannel shirt,” Chico said, “and I said, 'Wow, he's pretty understated.' He didn't send in lawyers, lobbyists. . . . He just came by himself.”

In a memorable regular-guy moment, Mr. Paschen got his hands dirty before a meeting with then-CTA president Forrest Claypool. “There was a concrete pour, and I had heard that a couple of the guys called in sick that day,” Blair said. “[Bud] said, 'Hey, let's go.' We had extra time, so I go over there and I pull up in front of the job. I don't even stop the car — he jumps out and grabs the concrete hose and finishes pouring the concrete. . . . We get downtown, he's got concrete all over him, and Mr. Claypool said, 'What happened?' '

He grew up in Evanston and attended Evanston Township High School and Northwestern University, Blair said, earning a civil engineering degree in 1959.

At Paschen Brothers, he was proud to work on the new McCormick Place and the IBM building designed by Ludwig Mies van der Rohe, said Terry Fife, a former Chicago History Museum curator who is compiling a Paschen family history.

After starting his own firm, he acquired S.N. Nielsen and Paschen Contractors. “Bud built his company into a multimillion dollar enterprise which now performs in 25 states,” according to the company's website.

Mr. Paschen had a golden gut for anticipating market forces, Blair said. And he was a good judge of people. “He would see a guy in the field, and he would see something in him, and it didn't matter if he had a degree,” he said. “He would work with him and promote him.”

“He helped our company transition from a small masonry company to a significant construction company,” said Louis Puig of A.L.L. Masonry, a Hispanic-owned business. “He gave minority contractors a real chance to succeed.” Thanks to Mr. Paschen, “we went from, I'd say, 12 people to 100-plus” workers.

When one Paschen employee lost a son to Chicago street violence, “He paid for the funeral,” Blair said.

Mr. Paschen, who also had a McHenry County home in Hebron, used to go deep-sea fishing near Panama's Coiba Island. And though he decorated his office with stuffed wild game, they were old taxidermy finds, Blair said. “I don't think he ever killed anything in his life except a fish.”

He liked muscle cars. Blair said he owned a gleaming purple '59 Corvette, “the Instigator,” with only 700 or so miles on the odometer. It was driven only at drag races.

Blair said Mr. Paschen is survived by his wife Dianne; daughters Debora, Jeanne, Mary and Elisabeth; his stepsons, Tony and Paul; his son Frank; and Daniel, a Ghanian minister whom he sent to college and considered his adopted son; a sister, LaVerne Finney; 22 grandchildren, and three great-grandchildren. Visitation is from noon to 8 p.m. Dec. 21 at Morizzo Funeral Home, 2550 West Hassell Road, Hoffman Estates. A funeral service is scheduled at noon Dec. 22 at Life Changers International Church, 2500 Beverly Road, Hoffman Estates.