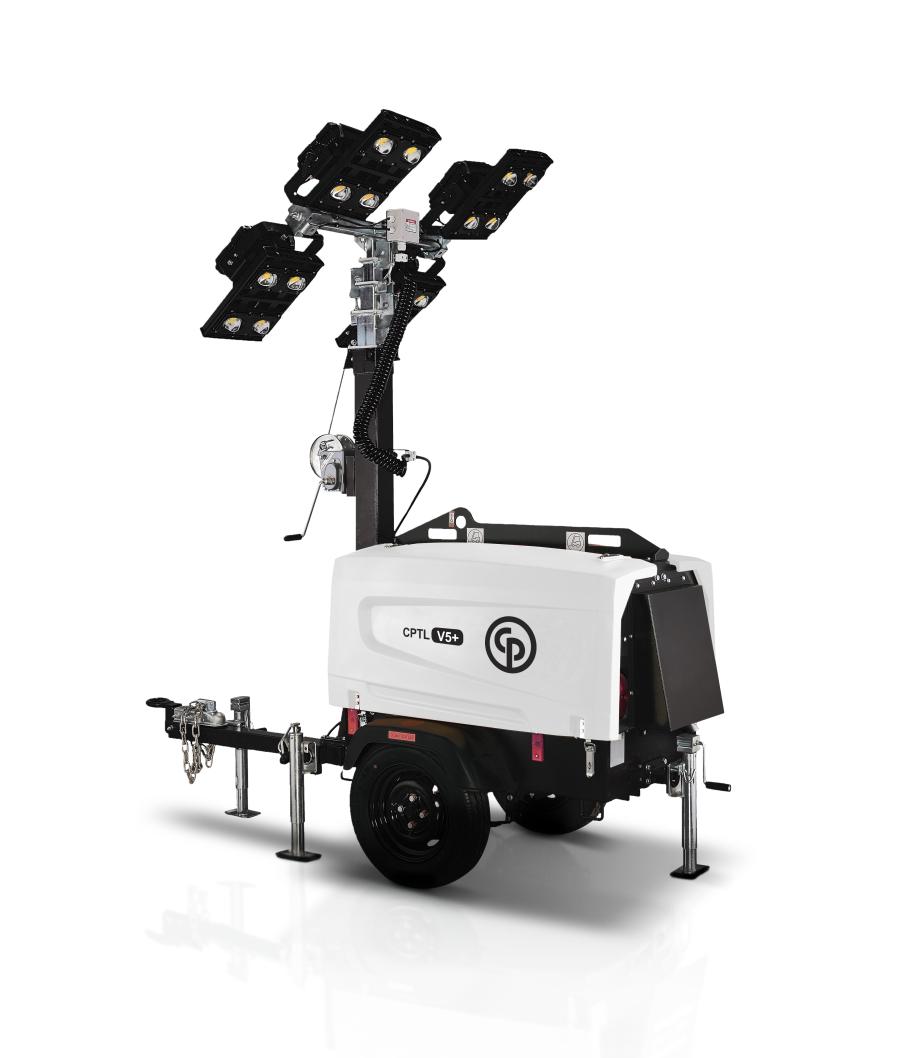 The CPLT V5+ offers high performance and luminosity with four LED lamps that are 350 watts each. With a 28-gal. fuel tank, the new light tower is capable of 150 hours of operation with all four lamps before refueling, maximizing productivity and illumination time.

Chicago Pneumatic Construction Equipment (CP) has launched its first LED light tower to the North American market with the introduction of the CPLT V5+ HiLight, joining the CPLT V4 metal halide version in the CP lineup. The new high-performance light tower features a heavy-duty polyethylene canopy for rugged durability and is designed to withstand the most extreme elements and working conditions, according to the manufacturer.

The canopy coupled with the light tower's compact size, ease of transportation, safety features and lighting performance makes the CPLT V5+ a great solution on any job site. It can be used in a wide range of applications and industries, including public lighting, events, roadwork, construction sites and general industry work.

The CPLT V5+ offers high performance and luminosity with four LED lamps that are 350 watts each. With a 28-gal. fuel tank, the new light tower is capable of 150 hours of operation with all four lamps before refueling, maximizing productivity and illumination time. A Kubota EPA Tier IV Final engine powers four high performing LED lights that offer visibility up to seven acres.

Other features include easy service access with wide wing doors to allow 100 percent access to the machine, including service components and drains. Also featured is an environmentally friendly frame design that prevents oil, fluids and fuel from leaking out and contaminating the ground. Additionally, the polyethylene canopy suppresses sound at a low 63 dB(A) level.

The LED light tower has several standard features that add significant value and versatility. These include spill containment, four heavy-duty stabilizers to withstand any extreme weather conditions, a 110 volt courtesy outlet that gives 2 kW of power to run other tools on the job site, and a vertical mast that can be raised to 25 ft. (7.6 m), 2 ft. (.6 m) higher than other towers.

“The CPLT V5+ is a great light tower for many reasons, but it comes with many standard features that are either not offered, or offered as options with many competing brands,” said Jim Siffring, product manager of portable energy at Chicago Pneumatic. “It will offer a great return on investment to users over the lifespan of the light tower. Fuel economy, lamp life and maintenance requirements are drastically improved when compared to conventional metal halide light towers.”

Chicago Pneumatic has several different options that are available for the CPLT V5+.