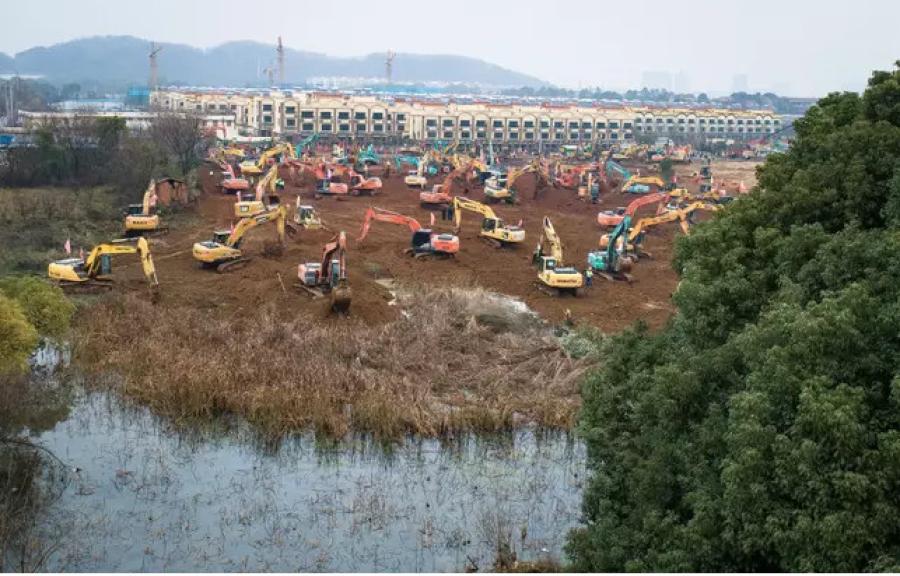 The hospital will sit in the Caidian District of western suburb of Wuhan. (Xinhua News Agency/PA Images photo)

The Chinese city of Wuhan is racing to build a giant hospital in a record six days in an attempt to stop the deadly Coronavirus that is ravaging the city.

The finished building, which will contain 1,000 beds on a 270,000 sq.-ft. lot, is being built around a holiday complex set on the outskirts of the city. It will be made of prefabricated buildings that will be destroy once the virus has been contained.

"The construction of this project is to solve the shortage of existing medical resources," the World Health Organization said.

The hospital aims to copy the style of a facility constructed in Beijing in 2003 during the Severe Acute Respiratory Syndrome (SARS) epidemic.

China State Construction Engineering, one of the companies building the hospital, said it is "doing all it can and would overcome difficulties" to play its part, adding it has more than 100 workers on the site. Building machinery included 35 diggers and 10 bulldozers.

Wuhan, a city of 11 million people, and neighbouring Huanggang, a city of about 7 million, are also in virtual lockdown as officials have banned residents from travelling in order to try and contain the spread of the virus. While most of the cases and all of the deaths have been in China, the virus has been detected in Thailand, Vietnam, Singapore, Japan, South Korea, Taiwan and the United States.