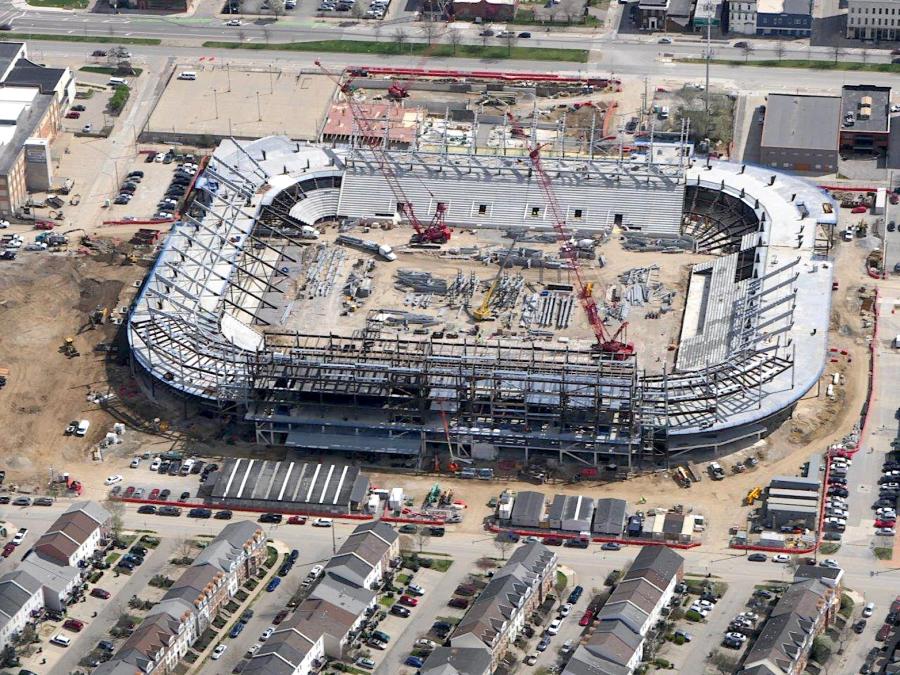 Construction crews in Ohio are working to complete a $250 million MLS stadium in Cincinnati.

Construction crews in Ohio are working to complete a $250 million project created to bring an unprecedented fan experience to Cincinnati. Designed by the renowned architecture firm Populous, West End Stadium will serve as the home field of FC Cincinnati of Major League Soccer (MLS).

"West End Stadium will be Cincinnati's newest sports stadium, and the anchor for neighborhood revitalization in the West End, as the city continues its remarkable renaissance," said Lizz Summers, FC Cincinnati vice president of communications. "A world-class venue with a design unlike anything in North America, West End Stadium will have clear and close views from every single seat in the building. 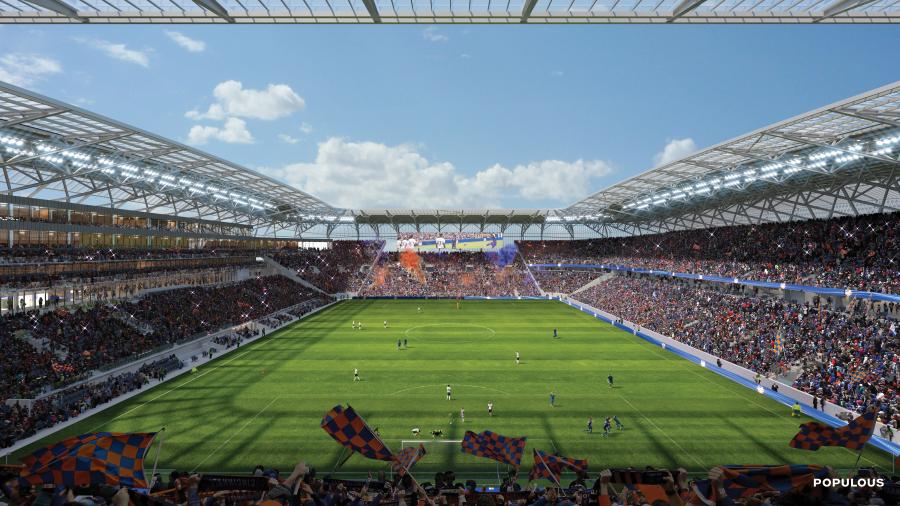 "The fan experience is central to the design of the building, creating an intimate atmosphere that will create a true home field advantage for FC Cincinnati. With considerations also made to accommodate other events, both sporting and cultural, West End Stadium is set to become a key destination for patrons from all over the Midwest."

According to Summers, West End Stadium is envisioned to be the jewel in the Queen City's crown.

"With a fan-forward strategy, the stadium will draw eyes and attention to Cincinnati. Soccer is a global game, and West End Stadium will provide a platform to bring Cincinnati to people around the world. MLS is already broadcast in more than 170 countries, but when you then layer in national team games, international friendlies and other cultural events, Cincinnati will gain global attention. With the growth of corporate business and acclaimed cultural enterprises here in the city, we believe that West End Stadium will become another attraction that sets Cincinnati apart from other similar cities."

Jeff Berding, FCC president, had a vision for what FC Cincinnati could mean to the area.

"First, launching the club as a minor-league franchise and realizing that it would not only succeed, but flourish and set new business and on-field standards was rewarding and eye-opening for the entire region," said Summers. "It was a source of immense pride for an area that truly embraces hard work and community success. The resounding success of Jeff's vision helped launch FC Cincinnati into Major League Soccer in record time. Now, after the long hours, hard work and collaboration to get the stadium project approved and under way, seeing West End Stadium rise so quickly out of the ground and take shape is really inspiring. 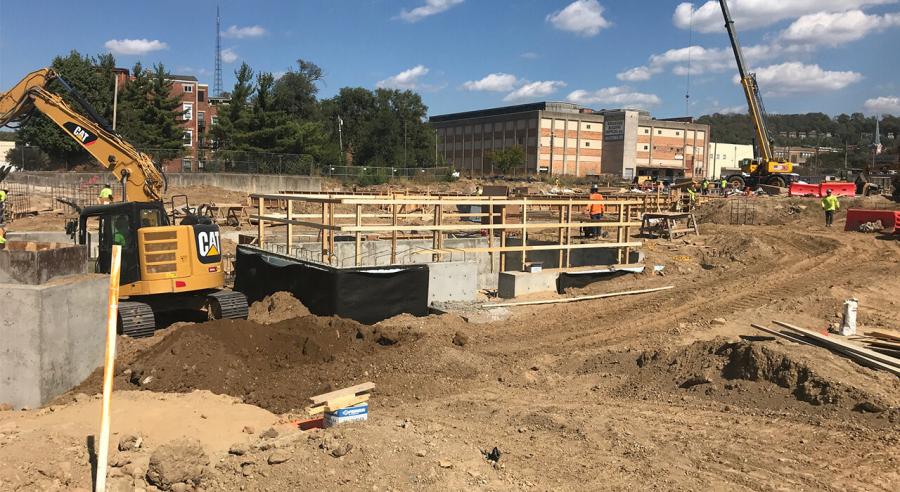 "The club is very excited about the lighted fin structure that will make up the external skeleton of the facility. Each fin will have an LED light system built into it that, when programmed, will allow animation and motion graphics to appear on the east side of the building. It will be unique to any sports facility in North America, and is being prepared by SACO, the same company that installed the system on Burj Khalifa in Dubai."

The entire east side of the stadium is designed to serve as an entryway to the community. A grand staircase will lead to the main gates through a large open plaza. Both the northeast and southeast corners of the stadium also will serve the community, both with open, programmable areas and the largest team store in the city and Major League Soccer.

"The project team also is being considerate and thoughtful in the smaller touches throughout the stadium, including seating choices in every section and design themes in the four premium clubs and suites, as well as concourse layout and design to accommodate the 26,000 fans who'll be on site for each event," said Summers.

The owner's representative is Machete Group, while Turner Construction serves as the general contractor. 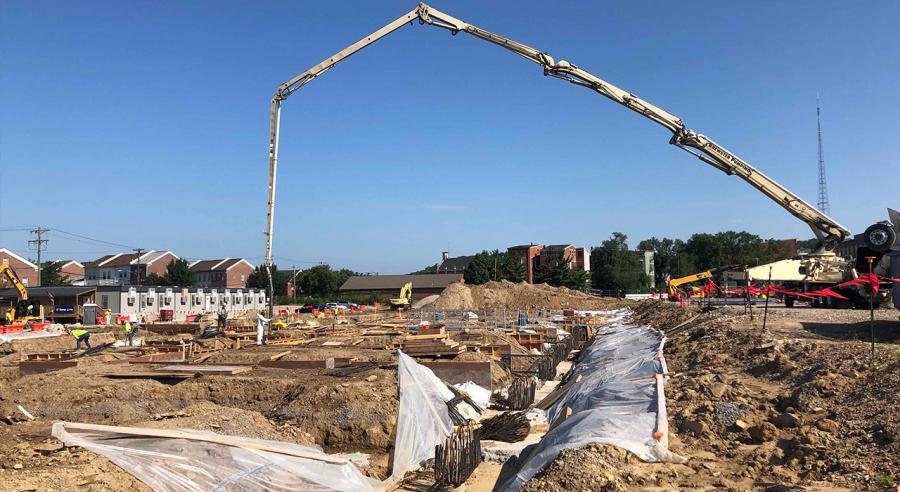 "To this stage, we've had two main challenges, but both have really boosted the project to make it better," said Turner Construction project manager David Bareswilt. "The first was collaborating with the city, county, state and the two immediate neighborhoods to gain project buy-in and approval so quickly. We worked hard to put a great community benefits agreement in place with the West End, unlike any other sports project in the city, to help ensure our actions and intentions of being a supportive citizen in our new neighborhood. We've received a lot of tremendously positive feedback from the overall West End neighborhood about our commitment and actions to support the revival of the West End.

"The other major challenge was that we changed architects midway through the design work and after site work began, but as Populous came on board with Jonathan Mallie as the lead architect, we worked hard to make a lot of really amazing adjustments and changes to reach the point we're at today. When it opens, through so much hard work from a tremendously dedicated stadium staff, the stadium is going to be world-class and garner worldwide attention. We're really excited about that, and it will make not only the city exceptionally proud, but make all the hard work worth the end product."

Site work began in the summer of 2018. After the completion of the high school football season, workers were able to deconstruct the existing high school stadium and stage the formal groundbreaking on Dec.18, 2018. MLS Commissioner Don Garber was among the attendees. 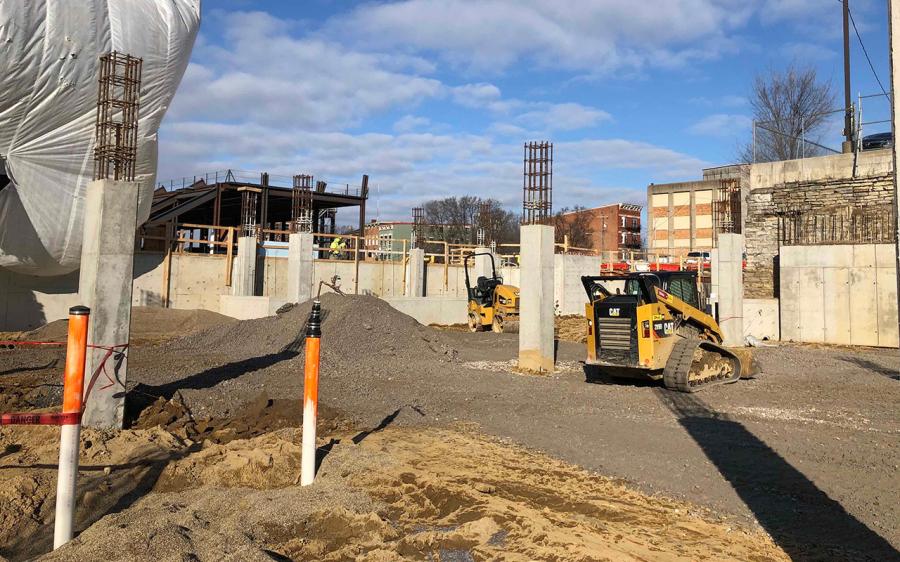 Now that all steel work for the lower bowl is complete, Turner is working on construction of the upper bowl and structure, including work on the canopy roof. Steel work for the 360-degree roofing system is expected to be complete in early July.

Simultaneously, concrete work is being performed on flooring levels. Fireproofing and other internal work is being carried out throughout the stadium non-public and team campus areas, and the precast is being installed in the lower bowl, with the upper bowl set to start installation.

Weather has not been a major factor, to date.

"The last two winters have been pretty mild, so we were fortunate that winter weather did not affect the construction timeline," said Bareswilt, who added that the site consisted of multiple individual lots.

"After acquiring the properties, abating appropriate materials and demolishing the buildings, the site was graded to elevation. Then, more than 1,400 auger cast piles were drilled to a depth of nearly 300 feet below grade. These piles were tied together with concrete grade beams and foundations, which gave the stadium its structural base. Concurrently, under-slab electric and plumbing lines were run to the building from new utility feeds. New power service lines were run to two new entry points into the building.

"Structural steel work has been under way since early December 2019. Steel continued through the upper bowl and the roof canopy truss work. The lower bowl precast concrete is now set, and is being detailed out. The press tower work also has been under way. The team campus areas, including locker rooms, sports medicine areas, etc., are framed, and HVAC roughed-in. Fireproofing and framing is moving up through the press tower from levels two to level three.

"The precast in the upper bowl began in May, with seating fabrication starting at the same time," said Bareswilt. "The 360-degree roof canopy is set to be complete toward the end of June. The exterior trades started with roofing, and exterior wall in May. Scoreboard production began in May, as well, and is set for a late June installation. After that, focus then turns to the interior fit out of the 56 private suites and multiple club-level seating areas." 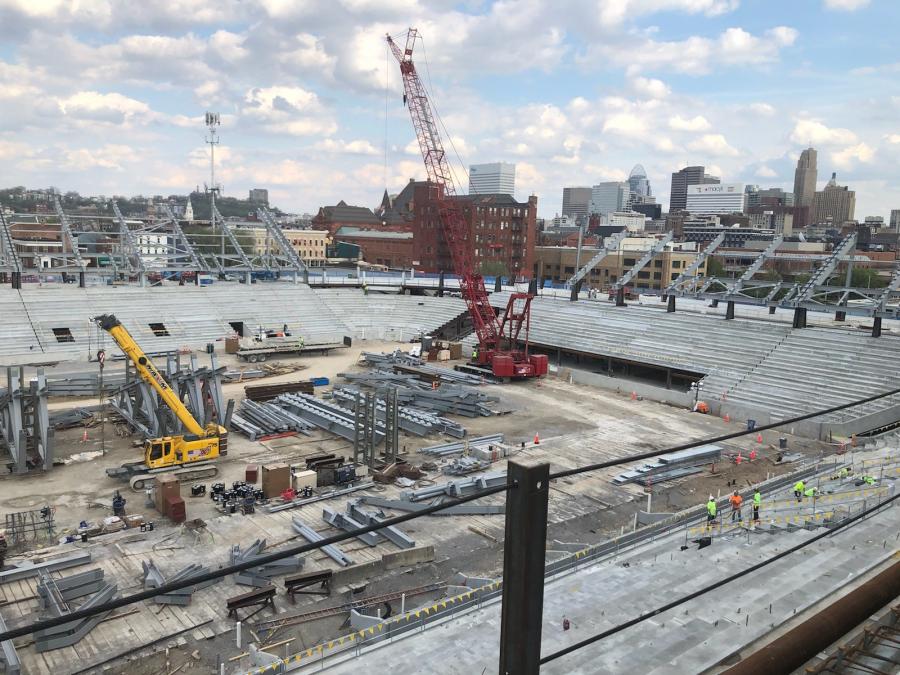 A variety of equipment is being used to complete the project. Bareswilt noted that delivering and putting together one of the two cranes on site went according to plan.

"The crane assembly was relatively painless. Our two Manitowoc 300T cranes took about a week to assemble. They had 80-ton assist cranes, but the process was fairly smooth. The preparation for the cranes, however, was very intense. We spent three weeks and more than a half-million dollars importing crane mats from Oregon to provide suitable base to carry the loads imposed on the ground from the cranes and the heavy weight that they hoist into the air."

Bareswilt added that the underground east parking garage is progressing.

"There is some comeback work to finish up the entrance and exit after the finalization of some utility relocations at 15th Street, which now dead ends at the stadium. The garage is a cast-in-place post tensioned deck that has its own set of auger cast piles. The majority of it is below grade, and it is capped by the stadium's grand staircase that leads to the large east plaza, which will serve as the primary stadium entrance."

West End Stadium is located a few blocks from both Cincinnati's downtown Central Business District and the Over-the-Rhine neighborhood. The official opening is set for spring 2021. CEG