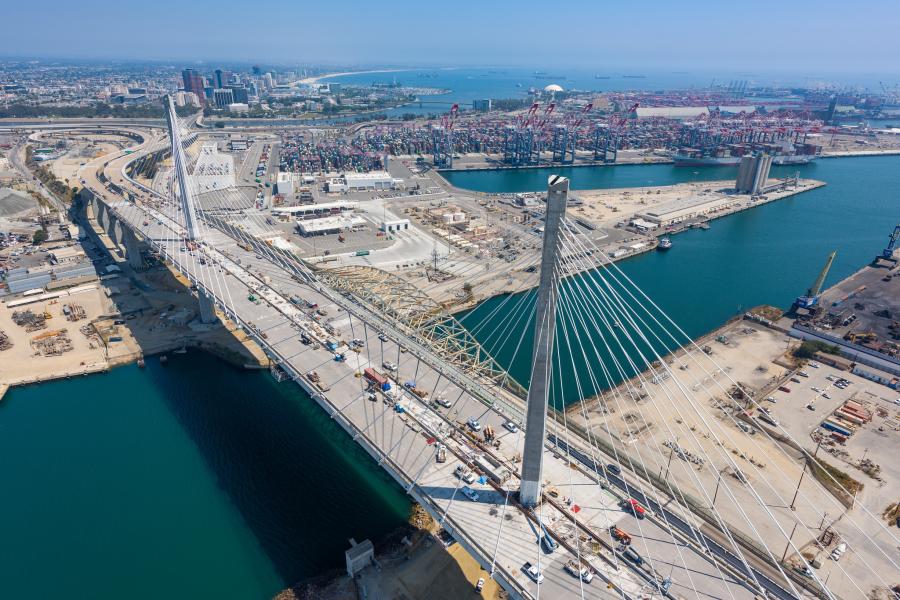 The Port of Long Beach and city officials held a celebration to kick off the official opening of the Gerald Bridge Replacement Project.

The second highest cable-stayed bridge opened to the public on Oct. 5

The new bridge — consisting of 18 million lbs. of structural steel and 75 million lbs. of rebar — has two towers standing 515-ft. tall, making the bridge the largest structure in Long Beach and casts a shadow over the original Gerald Desmond Bridge, which served the nation's second-largest port for 52 years.

While officials and VIPs stood atop the bridge to celebrate, the ceremony was not open to the public because of the ongoing coronavirus pandemic. City and port leaders celebrated at the $1.46 billion bridge's completion. 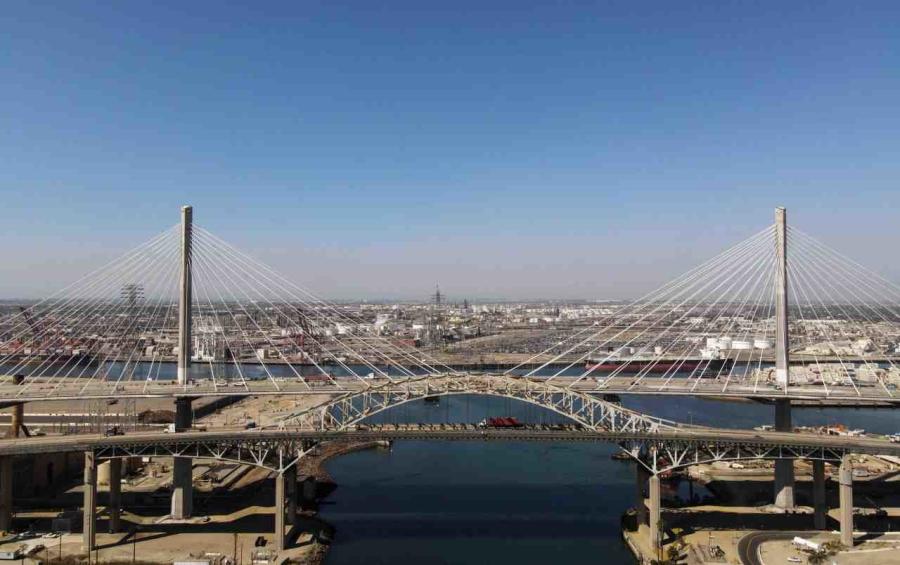 The project to replace the old Gerald Desmond Bridge — too low to serve the larger cargo ships of today and wearing down from increasing truck traffic — began in 2013, with more than 350 massive concrete pilings providing the foundations for the monumental undertaking.

The new bridge, with its 2,000-ft. span, is intended to last 100 years, requiring little maintenance, according to officials, thanks in part to special joints at each end of the main span.

At the ceremony, Mayor Robert Garcia said the unnamed bridge will connect "Long Beach to the rest of the country."

A procession of 30 low- and zero-emissions cargo trucks took the honorary "first drive" across the bridge, followed by 34 classic cars from different eras — meant to capture the port's 109-year history. Five planes from Torrance's Tiger Squadron performed a flyover, in formation, to pay tribute to Terminal Island's legacy as a former U.S. Navy base. And a boat parade saw water-spouting fireboats, police boats and tall ships circle the waters below.

"This is a historic day for our city and for the nation," Garcia said. "We know that this project is a phenomenal marvel of architecture and infrastructure. It connects our port and the world to each other."

Toward the end of its run, the Gerald Desmond had seen more than 15 percent of the nation's imported cargo, valued at $170 billion, travel across it. That task will now fall to its successor

"This new bridge is another major milestone in the Port's ongoing commitment to remain the most advanced and most competitive port in the world," said Port of Long Beach Executive Director Mario Cordero. "It is much more than a convenient roadway. It is a critical link in the global movement of cargo."