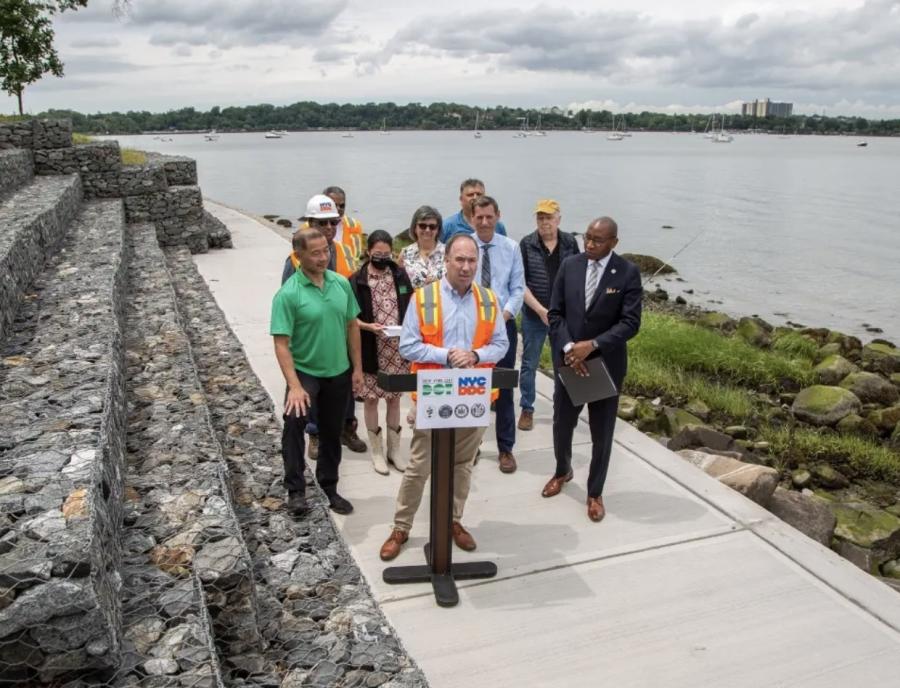 NYC DDC, DOT, elected officials and the Douglas Manor Association announced the completion of the $4.9 million project to stabilize Shore Road from West Drive to Bayview Avenue along the Little Neck Bay. (NYC Department of Design and Construction photo)

The project, which was delivered $700,000 under budget, was funded by DOT and managed by DDC.

"The design here using gabion baskets filled with stone was developed in-house at DDC and is an efficient yet aesthetically pleasing solution to the stabilization problem on Shore Road," said Foley. "DDC is engaged in coastal protection projects throughout the city and is prepared to employ a variety of strategies to guard shoreline areas."

"I'd like to thank my DOT colleagues, DDC and all the elected officials who helped make this critical resiliency project a reality in a timely manner," said Garcia. "The nor'easter significantly damaged the embankment, requiring vital repairs we can all celebrate today."

"The damage caused by the 2018 nor'easter left Shore Road in Douglaston a perilous state that required urgent repair," said Richards. "Thankfully, the DDC and DOT were more than up to the task of completing the necessary repairs quickly and under budget, and in an aesthetically pleasing manner as well. I commend all those who worked on this project for their dedication to stabilizing this important roadway and to protecting our vulnerable shorelines."

"The Shore Road waterfront is a hidden gem in Douglaston, widely enjoyed at all times of the year by both residents and visitors wishing to take in sweeping vistas of Little Neck Bay," said Liu.

"When the 2018 nor'easter threatened to destabilize the entire region, we knew immediate resiliency actions needed to take place. Throughout the pandemic, when construction slowed across the city, my office worked closely with DDC, DOT and the city comptroller to expedite this emergency contract and make sure it remained a priority to the administration, and we're elated that the finished project came in on time and under budget.

"The restored walkway is a wonderful addition to our community that offers both a place for recreation and upgraded infrastructure that will protect against climate change well into the future. Special thanks to former Council Member Paul Vallone and former Douglas Manor Association president Mike Gannon for their herculean efforts to make this project happen."

"Little Neck Bay is an integral part of Douglaston's rich character and charm. However, the neighborhood's close proximity to the body of water presents certain challenges when it comes to natural wear and tear on its shorelines," said Braunstein.

"The Shore Road project has provided needed stabilization and support and will help keep the coastal roadway and the surrounding embankment structurally sound in the years to come. I thank DDC and DOT for their hard work as we celebrate the project's completion with the Douglaston community."

"It is vital that we maintain the integrity of our coastal communities and protect our shorelines, while also maintaining the beauty and history of Douglaston," said Paladino. "I commend the work of NYC DDC and DOT for the major accomplishment of this project to have been completed swiftly, especially under budget. This is a very exciting time for the Douglaston community."

"The members of our community would like to thank DOT for quickly seeing the need for the stabilization of Shore Road after the nor'easter of 2018 and DDC for their sound and aesthetically pleasing solution," said Thompson. "Shore Road is an important part of the fabric of our community. It was designed in 1906 as our promenade, a place where we can take a leisurely walk and meet neighbors or just reconnect with nature. We also thank our elected officials for their support throughout the project."

Shore Road runs along the coastal perimeter of Little Neck Bay in Northern Queens and the nor'easter of spring 2018 left the street from West Drive to Bayview Avenue in imminent danger. The embankment and timber walls that supported the street along with the pathway used by workers to help maintain the embankment partially collapsed and was vulnerable to further inclement weather.

The project was designed by DDC's in-house design team along with Hazen and Sawyer, construction was completed by MFM Contracting Corp. and engineering services were provided by EnTech Engineering PC. 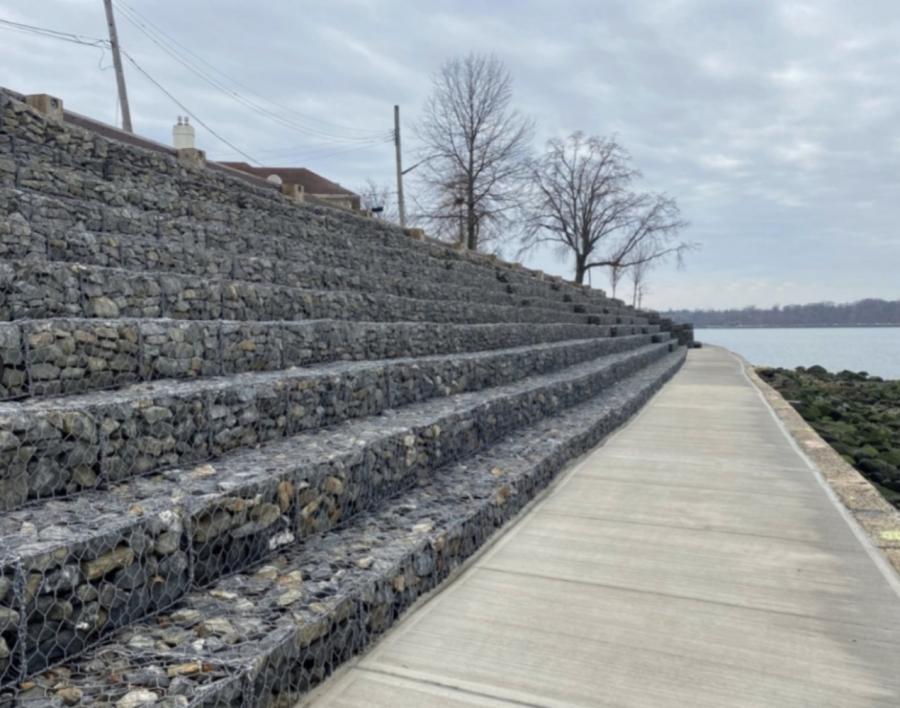 Approximately 700 cubic yards of gabion baskets support the embankment and roadway and the restored walkway allows workers to access the embankment for maintenance. (NYC Department of Design and Construction photo)