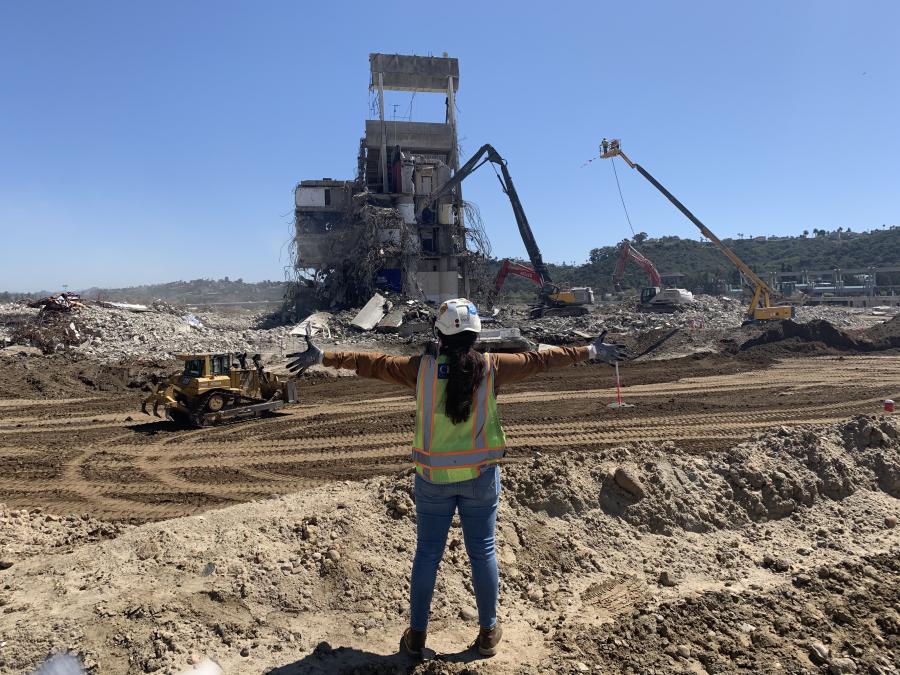 With the rubble of Qualcomm Stadium piled high about 150 yds. away, the construction of San Diego State's new football stadium reached a major milestone on July 14, 2021. 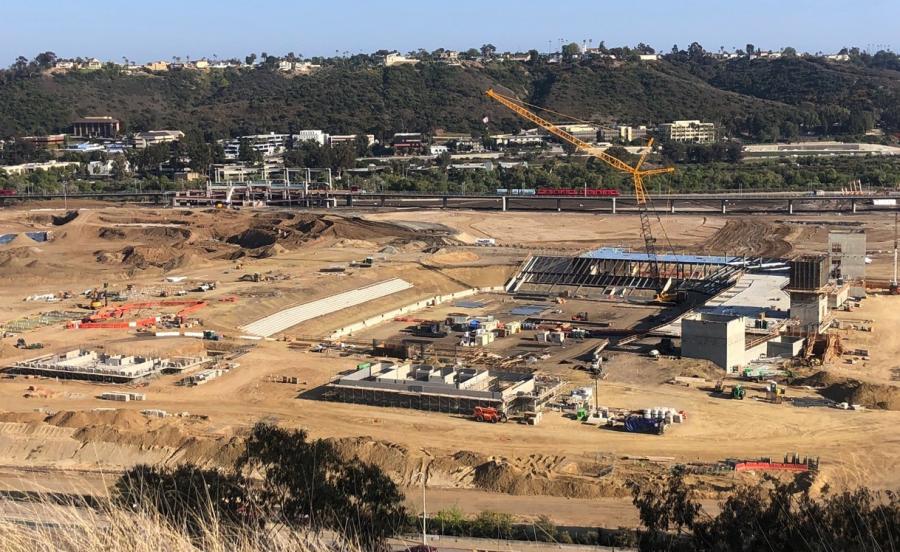 Construction crews from Clark Construction performed a traditional "topping-out" ceremony at Aztec Stadium by hoisting the final steel beam into place at the top of one of the scoreboard frames. The beam was signed by guests and had a symbolic evergreen tree on it.

Crews separated out rebar and other debris and ground the concrete rubble into small pieces that will be used for fill around the site.

Clark Construction is leading design and construction efforts on the multi-purpose venue and nearby community river park, as well as performing site infrastructure improvements. Gensler Sports is the stadium project architect.

"This is a thrilling milestone for the entire Aztec Stadium team," Albert Valdivia , Clark's vice president in charge of construction operations for the project, said via a statement. "Despite an unprecedented year, our team and partners have risen to the challenge and moved stadium construction forward. The ceremony is an opportunity to recognize the men and women helping us build for their dedication to their craft and to advancing this project safely during such an extraordinary time."

During the project-wide celebration, craft workers and event attendees were treated to a special program involving SDSU President Adela de la Torre and San Diego Mayor Todd Gloria. To conclude the occasion, ironworkers set the last of the venue's 2,500 steel beams in place atop the stadium's scoreboard.

Once complete, the year-round sports and entertainment complex is projected to host more than 300 events annually. The facility will showcase luxury suites, loge boxes, and club and priority seating, and boasts clean sightlines to ensure patrons have premium views from any location within the stadium. Moreover, the venue's wide-open concourses are designed to create connectivity to the field. Signature design elements, such as the venue's concourse level "neighborhoods," designed to reflect the city's diverse communities, and unique standing-room-only "piers" that jut out over stadium seating and conjure a coastal vibe, all combine to create a venue that is authentically San Diego.

"This is the culmination of four-plus years of work to get to this point, a stadium for San Diego State and the community. The athletic department, and the University as a whole, are excited that we have made it to this point and we are really looking forward to September 3 of next year," said John David Wicker, director of intercollegiate athletics for SDSU. "For anyone that has driven by Mission Valley in the last couple of weeks they have seen the stadium come out of the ground as the steel structure has gone in for the upper decks on both sides. Kudos to all the volunteers out there, the community members, our alumni, but also the architects, the general contractor, all our various consultants and folks on campus that have worked hard to get us where we are today."

Aztec Stadium is on schedule to debut during the Aztec Football season opener against the University of Arizona Wildcats in September 2022.

The last section of Qualcomm Stadium was knocked down in late March.

In November 2020, construction crews began the dismantling of the decades-old SDCCU structure. Abatement activities were performed as structural demolition began, a process that that concluded this summer. As part of this effort, crews from Clark removed and preserved numerous artifacts from the existing stadium, which will be incorporated into the new structure upon completion. Stadium seats are being salvaged to provide San Diego sports fans the opportunity to take home a piece of the historic stadium. Soft demolition was executed on the pedestrian ramps around the stadium's perimeter. 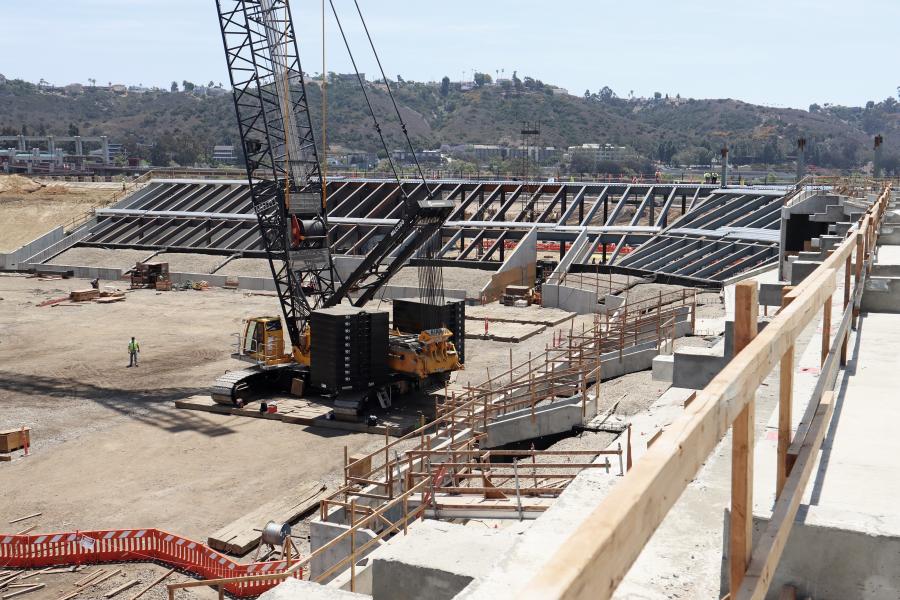 Clark spent the first several months of the project prepping the site and driving more than 2,000 stone columns below grade. The columns, which range from 2-to-3 ft. in diameter and measure up to 36 ft. long, provided soil stabilization and will help support the stadium's structural load by transferring the weight of the structure from the foundations into the earth below. In December 2020, concrete crews placed the first 2,300 yds. of concrete to form the stadium's 6-ft.-thick mat foundation, marking another critical early milestone. Vertical construction began in early 2021.

Clark recently completed shotcrete retaining wall mock-ups, which are set to be tested by structural engineers for compressive and flexural strength, coverage and finish quality. The mock-ups will serve as models for the future walls around the west side of the stadium bowl, creating space at the event level.

Elsewhere on the expansive site, crews paved the way for critical infrastructure that will support both the stadium and future Mission Valley development. As part of earthwork operations, soil was imported to build up the site elevation and make way for future streets. The installation of the first permanent site utilities also is slated to begin before the end of the year. These utilities will service the new stadium upon its completion in September 2022.

The facility, which is designed to meet LEED Gold certification, is a part of the first phase of SDSU Mission Valley, a vibrant, mixed-use, medium-density development that is transit-oriented, and expands the university's educational, research, entrepreneurial and technology transfer programs. SDSU Mission Valley also will include retail, housing and the development of community parks and open space; it is projected to provide educational opportunities for up to 15,000 additional students and expand the university's economic impact by an estimated $3 billion per year.