Cleaning Up Moab UMTRA Site Will Likely Top $1B 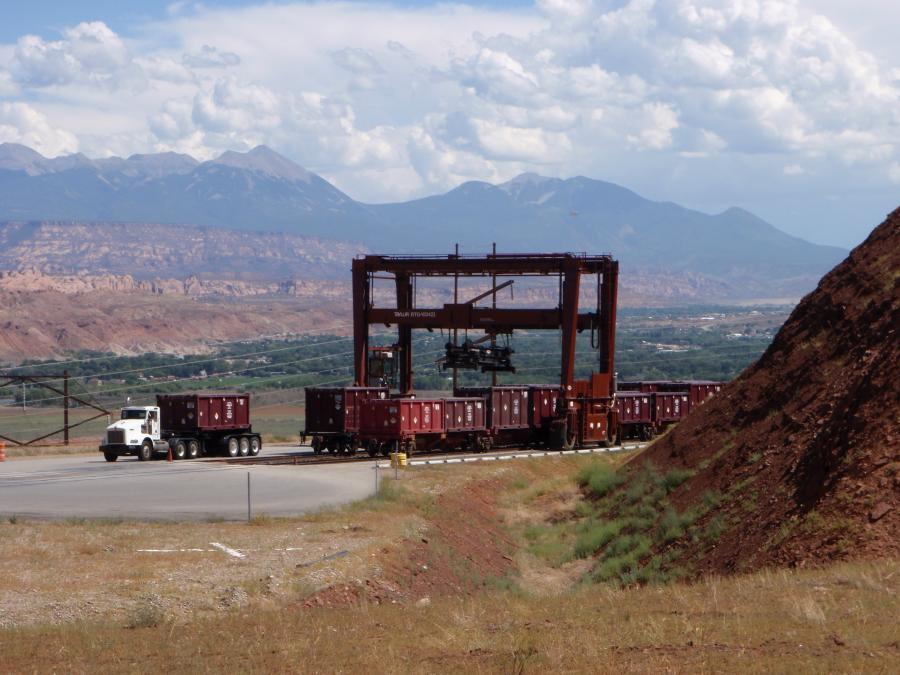 A gantry crane is used on the rail bench to transfer containers to and from the train at the Moab site. (S&K Moab TAC Team, Contractor to the U.S. Department of Energy photo)

A massive undertaking to remove and relocate uranium-ore tailings from a Moab, Utah, site is in its eighth year with materials continuing to be extracted and carried by train to a site in Grand Junction, Utah.

The project site — 3 mi. northwest of downtown Moab within Grand County — covers about 480 acres, with mill tailings sitting on 130 acres within the site. The site is near Arches National Park and the Colorado River

The project is a long-term effort. Crews started shipping tailings in 2009. The current estimated completion date for the cleanup project is 2034.

Initially the funding amount was $35 million, but over the last five years has averaged about $36 million per year. The total estimated lifecycle cost for the project is approximately $1 billion.

The project involves excavation and removal of health-threatening uranium-ore mill tailings and other contaminated materials and transport of the materials in containers by train to a disposal site near Crescent Junction, Utah. Huge hauling trucks receive the materials and carry them to awaiting rail cars.

An overpass was built across Potash Road at the Moab site, so haul trucks will not have to encounter highway traffic. A gantry crane is used to transfer containers of the contaminated materials to and from the train.

Crews constructed an engineered disposal cell near Crescent Junction to receive the mill tailings. The mined uranium was used in making atomic bombs during the cold war era.

The Moab UMTRA project also includes remediation of ground water at the mill site. The U.S. Department of Energy Office of Environmental Management in Grand Junction, Colo., manages the project.

The uranium mining mill operated at the site until 1984. In 2009, the federal government provided an initial $108 million in federal stimulus money to fast-track the clean up.

The funding was part of the American Recovery and Reinvestment Act of 2009. Most of the money was used to accelerate tailings shipments from the Moab site to the Crescent Junction disposal site.

Part of the annual $36 million in funding goes toward covering the disposal cell near Crescent Junction. Crews will cover about 50 acres of the disposal site with clay and rock material.

Engineers have designed protective berms to keep the water away from the radioactive dirt.

Portage Inc., which is owned by Northwind, both of Idaho Falls, Idaho, is the prime contractor for the Remedial Action Contract (RAC). Portage has subcontracted some of the RAC scope to Utah-based-Nielson and Wood, its teaming partners.

S&K Logistic Services LLC (SKLS) of Byron, Ga., is the prime contractor for the Technical Assistance Contract (TAC). It teamed with Pro2Serve of Oak Ridge, Tenn., to perform the TAC scope.

The project has multiple local and regional subcontractors for various smaller scopes of work, such as electrical, pest control, portable toilets, rail maintenance and laboratory analyses. Union Pacific Railroad is the rail transportation subcontractor. Some of the major names include Bodec Electric of Price, Utah; London-based Balfour Beatty; and ALS Environmental of Simi Valley, Calif.

The shipping schedule is one train, two days a week for most weeks unless there is a holiday. The project began shipping 140 containers on each train last summer and has continued that level with a total of slightly more than 4,600 tons per trainload.

About 450,000 tons are planned to be shipped to the disposal cell annually. The total estimate to be shipped over the life of the project is 16 million tons.

The trucks hauling containers to the train in Moab are a standard over-the-road tractor pulling a triple-axle trailer. The trucks transporting containers at Crescent Junction are a 40-ton articulated haul truck modified to carry containers. At each location, trucks travel about one-quarter to one-half mile to and from the train.

The project has two gantry cranes at the Moab site; however, only one is currently used at a time. There are no gantry cranes at Crescent Junction. Reach stackers are used to transfer containers to and from the train at that site.

The project will help prevent contamination caused by floods.

“Moving the mill tailings to a permanent disposal cell away from the Colorado River will eliminate the risk of tailings being washed into the river from a catastrophic flood event,” said Wendee Ryan, public affairs manager for S&K Moab TAC team, a contractor to the U.S. Department of Energy.

She added that most employees live within a 100 mi. radius of Moab and that the project provides stable, year-round employment to the area.

Ryan said the Moab tailings pose no direct threat to Arches National Park. However, contaminants, mainly ammonia and uranium, from the tailings pile have seeped into the ground water, causing concentrations to exceed regulatory limits. In 2003, crews installed an interim action ground water remedial action system to capture contaminant mass and to reduce contaminant concentrations prior to them discharging to the river.

The groundwater at the site is not a drinking water source.

“Flash flooding of the Moab Wash can occur and severe storm events can cause erosion of the tailings pile,” Ryan said. “The project has constructed berms around the base of the pile to minimize release of contamination off site during events like these.”

Materials are dumped at the disposal cell according to a specific protocol.

At the Crescent Junction site, crews unload the containers carrying tailings from a train onto trucks that take them to the disposal cell dumping area.

The containers are a modified intermodal container constructed of steel and equipped with a locking metal lid placed on top. Each container also has a top-hinged gate the truck driver can open and close. The tailings are top-loaded in the containers in Moab and emptied in the disposal cell via the gate.

The tailings are dumped through end gates in the containers and placed in the cell in 1-ft. lifts to meet compaction specifications. Workers then reload the empty containers onto railcars and returned to the Moab mill site.

The disposal site is rectangular and is aligned in a west-to-east direction. The completed cell will be about 5,200 ft. long by 2,400 ft. wide. The cell is excavated about 25 ft. below the existing grade. Then the deposited materials are built up to a height of about 25 ft. above ground level. Crews are capping the top of the contaminated materials with a 9-ft.-thick multi-layered cover composed of native soils and rock.

Located northeast of the eastern junction of I-70 and U.S. Highway 191, planners selected the location disposal location because of its ideal geological setting.

To keep the project moving, crews operate one tailings-carrying train a day, two days a week. The trains carry 136 containers for a total of about 4,600 tons per trainload.

Because of the vast size of the project, work is being done in multiple phases. A third phase began in spring of 2016.

The third phase is about halfway complete; however, the remaining half will likely not need to be excavated for several years.

A total of four phases of excavation are planned.

Uranium Milling Near Moab Began in the 1950s

Uranium Reduction Co. constructed the Moab mill in 1956 and operated it until 1962 when the assets were sold to Atlas Minerals Corp.

Workers milled uranium concentrate called yellowcake. The yellowcake was sold to the U.S. Atomic Energy Commission through December 1970 for use in national defense programs.

After 1970, production was primarily for commercial sales to nuclear power plants. During its years of operation, the mill processed an average of about 1,400 tons of ore per day.

The milling operations created tailings, a radioactive sand-like material. The tailings were pumped to an unlined impoundment in the western portion of the property. The material then accumulated over time to form a pile exceeding 80 ft. thick.

Although more than 90 percent of the uranium was removed during processing, radium and other decay products remained in the tailings.

Atlas operated the mill until 1984 when it demolished the processing buildings and buried them in the southwest corner of the tailings pile and covered the material with an interim cover. It was part of decommissioning activities between 1988 and 1995.

Atlas proposed to stabilize the tailings pile at Moab by permanently capping it in place. However, Atlas declared bankruptcy in 1998 requiring the company to relinquish its mining license.

The U.S. Nuclear Regulatory Commission then appointed PricewaterhouseCoopers as the trustee for the Moab Mill Reclamation Trust and licensee for the site.

Maintaining equipment in the long haul has been a challenge for companies involved in the Moab-Crescent Junction project.

Much of the heavy equipment at both sites has been in use for eight years and maintaining or replacing the aging equipment is a costly challenge. In addition, the tailings material has corroded the inside of some of the shipping containers. New metal panels have been welded to the outside of many containers and a polyurea liner has been sprayed on the inside of about 150 of the original roughly 350 containers. Twenty-two new containers were purchased in 2016 and more may be purchased in 2018 to replace those beyond repair.