Clearing the Way Ahead 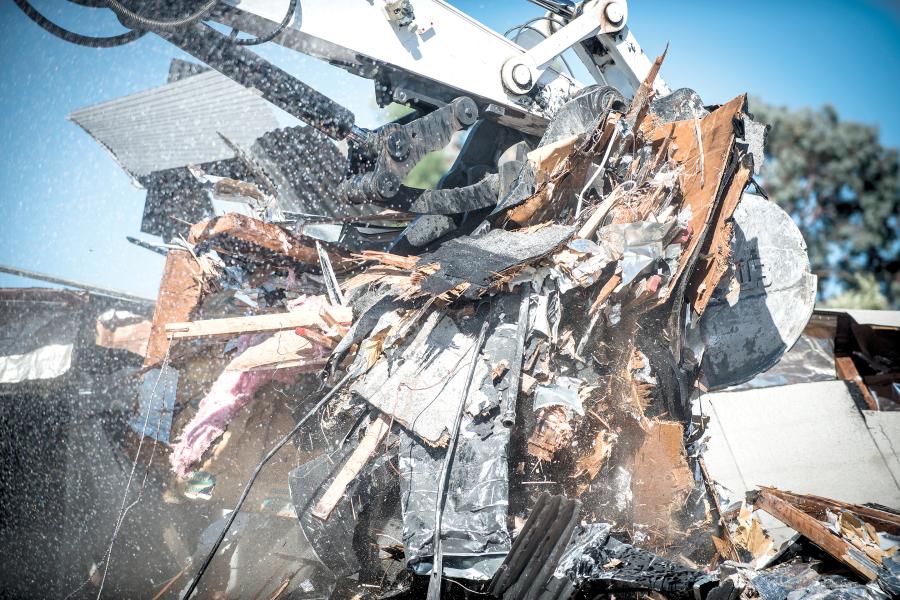 The durably-designed EC350EL makes light of the heavy-duty load due to the attachments, purpose-built to form one solid, reliable unit.

As the sun slowly rises to the east of Sunnyvale, Calif., the still, dry air ignites with an escalating heat that is matched only by the city's reputation for being a hotbed of high-tech giants such as Apple, Yahoo, Google and Microsoft. All are based, or have offices, in the Silicon Valley community.

Located 40 mi. (64 km) south of San Francisco, Sunnyvale's ambition to attract more high-tech businesses is unwavering. To make room for further growth, FERMA Corporation is using its own technologically-advanced machinery, including a fleet of Volvo EC350EL excavators, to help clear the way for the city's future.

In 1963, four brothers and a partner started FERMA as a site-clearing business. Over the years, it evolved into an engineering and demolition company that knocks down everything from high-rise structures to small business buildings, such as the one currently being demolished by two Volvo EC350EL excavators on the future site of a Google parking lot.

“Our specialty is high-reach excavators — basically, the extremes of what a machine can reach in all directions,” said Marc Ferrari, president of FERMA Corp. “Right now in North America we have the highest-reaching demolition machine, just shy of 200 ft.,” he explained.

Similar to its hi-tech neighbors, FERMA is focused on staying ahead of the competition with a vision that makes it difficult for the rest of the industry to keep pace. Its mantra to create value by using the latest in technology and machinery is the reason Ferrari recently switched FERMA's patronage to Volvo Construction Equipment. Its EC350EL carries a D13 Tier IV Final engine, a new electrohydraulic control system and, according to the company, Volvo's ECO mode that can deliver up to 9 percent greater fuel efficiency, something that Ferrari said was hard to believe at first.

“We heard outlandish claims from other brands, but this was actually true. They're running on about eight U.S. gallons per hour, and because we run mostly tools, we have them running at higher RPMs for longer than most other applications. We're always at the high end, or maxed, based on the type of work we do and the tools we use,” he said. “Because we're doing demolition, there's always activity, so we achieve more than 90 percent working utilization while the engine is running versus the industry standard of around 60 to 75 percent. These machines, when they're on, they're working.”

The first of 20 Volvo EC350ELs arrived in August 2015 to join the Volvo EC480E high-reach excavator Ferrari already runs for FERMA. Volvo Construction Equipment dealer Dan McCausland admitted it was not easy persuading the demolition innovator that FERMA's future was with Volvo.

“In the United States, Volvo Construction Equipment has only been marketing excavators since around 2000,” said McCausland. “The machines have come a long way over the last few years with Tier IV Final engine technology and their ability to run multiple attachments, such as a concrete processor, a shear, a hydraulic breaker and a bucket and thumb. Now, the operator can program all of the attachment hydraulic pressures and different flow settings from the monitor in the cab.”

Once convinced, Ferrari worked closely with local dealer VCES to instruct FERMA operators who were not familiar with the brand.

“We've had a great deal of help from Volvo Construction Equipment and VCES getting our operators comfortable with the equipment, and dialing in the controls so they were similar to what they have been used to,” he said.

As the third-generation family member to lead the company, Ferrari's innovative ideas, such as the heavy-duty bucket-and-thumb attachment he designed that can grasp objects as small as a 1-in. (25.4mm) pipe, have helped FERMA's annual gross revenue skyrocket from $40 million in 2012 to $70 million in 2014.

Just as impressive, Ferrari has used his innovations and his Volvo EC350EL fleet to recycle an average of 98.5 percent of the material demolished by FERMA at every site, a statistic that is practically unheard of in the demolition industry.

And just as FERMA pushes the limits with its ideas, Volvo has shown it can do the same by making things easier and more efficient for the Bay Area company.

“The EC350EL has two cameras and heavy-duty side bumpers. Volvo is quite supportive when a customer has unique needs to be able to work in a safe and protected environment. It says a lot about Volvo Construction Equipment, how they tried to make me happy,” said Ferrari. “We also asked VCES to customize the controls. We now have digital-frequency wired-in radios in the machines. We took out the factory stereos, put in the radios, ran them through the factory speakers and wired in toggle controls for the microphones and the push-to-talk, so now the operator never has to take his hands off the excavator controls to talk to the personnel around him. It's a very nice safety feature.”

Not as accommodating, however, are California's strict restrictions on weight, which forced FERMA to make slight modifications to the EC350EL before it could be put to work in the Golden State.

“The threshold for us is 92,400 lbs. so anything under that is legal,” said Ferrari. “When we tried out the Volvo EC380E, without all of our customizations, it was at 92,000 lbs.,” he explained, turning to the two EC350ELs working on the future Google parking site. “With all of our modifications, such as the added protections, the heavier bucket and thumb, its larger cylinder and the Volvo S-series quick coupler, these machines currently spec out at just over 90,000 lbs.”

To the untrained eye, the mechanical changes might be difficult to distinguish. However, Ferrari's most obvious modification request can be spotted from several blocks away. Volvo custom-painted the entire excavator fleet with FERMA's unique green and white colors.

“They really did an amazing job. People can easily identify our company by the FERMA-colored machines.”