The two day certification, conducted at Manitowoc’s facility in Shady Grove, is a battery of tests to prove a technician’s ability to troubleshoot, diagnose and resolve issues. 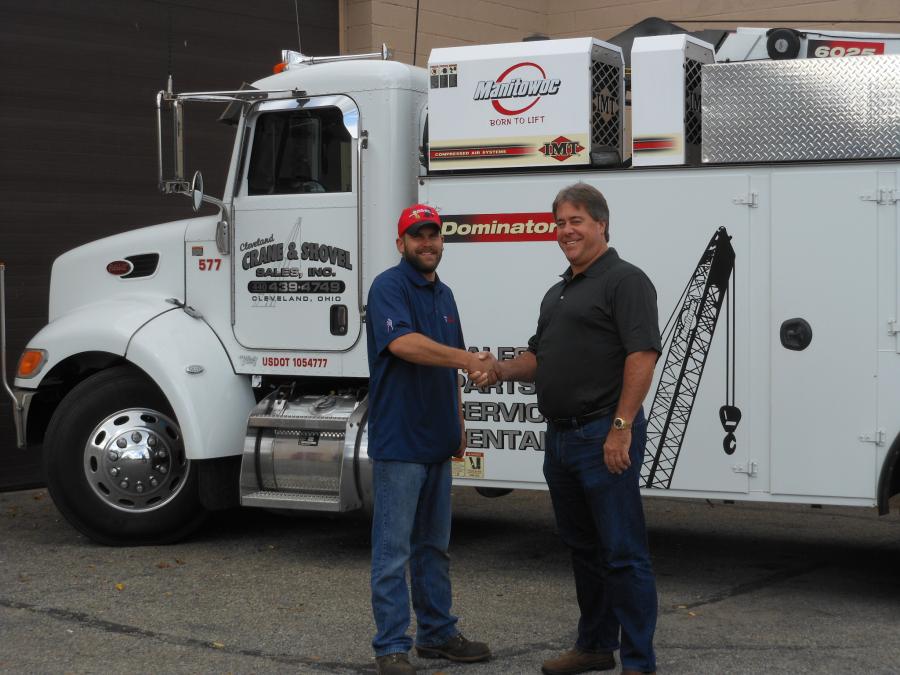 Carl Goins (L) is congratulated by Bill Aurelius for completing the Manitowoc GMK 8.1 Certification Course, and distinguishing himself with the highest test score of 99 percent.

Cleveland Crane & Shovel's Carl Goins recently joined an exclusive group of only a handful of technicians who have completed the Manitowoc GMK 8.1 Certification Course, distinguishing himself with the highest test score of 99 percent.

The two day certification, conducted at Manitowoc's facility in Shady Grove, is a battery of tests to prove a technician's ability to troubleshoot, diagnose and resolve issues with both current and post production GMK cranes. The program consisted of both written and hands on testing.

Hands-on testing covered diagnostics and troubleshooting on a variety of basic and advanced electrical, basic and advanced hydraulics, programming, systems calibration, mechanical operations, and engine, driveline, suspension systems. Where applicable, simulators were used in this portion of the testing.

Established in 1978, Cleveland Crane & Shovel Sales Inc. is a Manitowoc Crane CARE Elite Dealer and one of the oldest original Manitowoc dealers in the United States. The company also is an authorized dealer of Grove, Mantis and Tadano.

Cleveland Crane & Shovel Sales Inc. provides sales of new cranes, rentals, service and parts for customers in Ohio, and surrounding counties in West Virginia and Kentucky, as well as used crane sales and service worldwide. The company employs a sales and administration staff of 12 and has a team of eight service technicians.

Carl Goins joined Cleveland Crane & Shovel Sales Inc. in 2011 and along with his GMK Certification, has received training in Grove domestic side and will be going for his Grove domestic certification in December.