Coal Mine Continues to Uncover Millions of Tons Annually 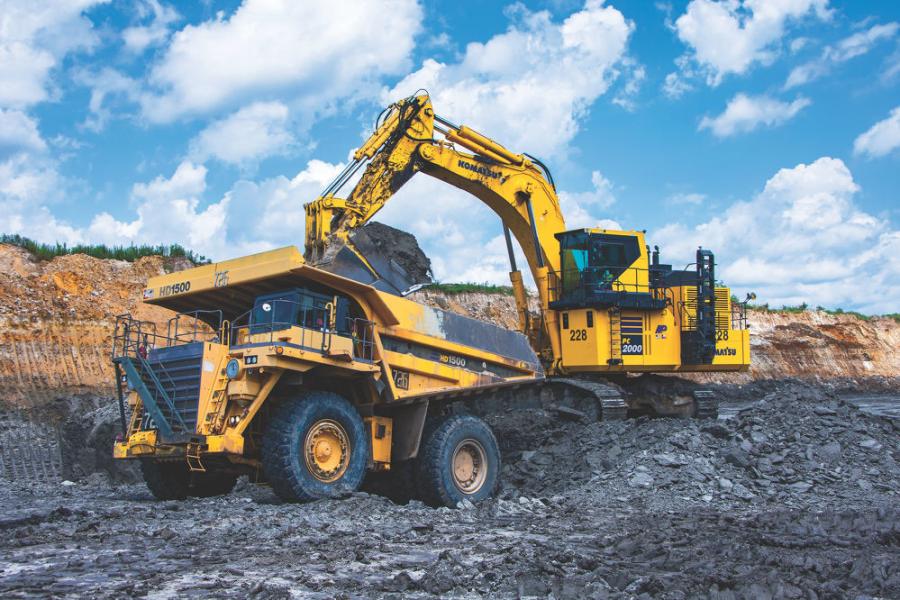 Operator Everett Pierce grabs a bucketful of earth with Sabine Mining Company’s PC2000-11. It was the world’s first Tier IV model put into production, with a 19-yd. bucket that can load a 150-ton truck in seven to eight passes.

The four types of coal used in energy production are classified by the amount of carbon they contain as well as how much heat energy they can produce. Lignite is the lowest-ranked, however, power plants in Texas commonly use it, due to its abundance across a large area of the Lone Star state.

"Efficient practices and power plants in close proximity are essential components for a successful mine," said Sabine Mining Company Production Manager Robert Fitzgerald. "One of the first things to determine is if there are long-term reserves. Usually that's enough available tons to run for at least 30 years. Then, you need to find a single customer that can design its plant based on the characteristics of the available lignite." 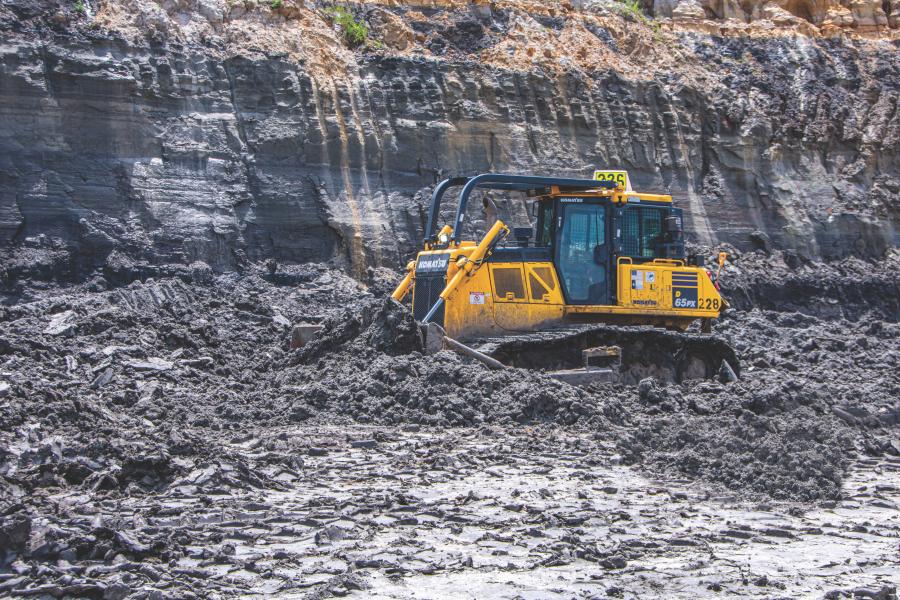 Sabine Mining Company — one of more than a dozen operations under the North American Coal Corporation umbrella — put the model into practice 35 years ago. Opened in 1984, it quickly began delivering lignite to its sole customer, an adjacent power plant.

Fitzgerald came on board a year later and has witnessed the expansion of Sabine Mining Company's footprint and the number of tons it harvests and transports annually.

"Initially, we delivered approximately 2 million tons per year and were working within a relatively short distance of the plant," said Fitzgerald. "In time, the tonnage has doubled, and we are now hauling coal from a couple of areas. One is about 11 miles away, and the other is close to 14."

"In order to do that, we work around the clock, seven days per week with four crews," said Mongeon. "We typically have about 60 people per shift working in the mine. That includes operators, truck drivers and shop personnel, among others. That is augmented with a fair number of temporary workers as needed."

Located just outside of Hallsville, Sabine Mining Company's expansion has led to more than 70,000 acres under permit across two northeastern Texas counties. Work was originally confined to Harrison County, but now has spread into Rusk County.

"There are three coal seams at varying depths throughout the property," said Mongeon. "The first step in opening a new area is pre-stripping, which involves excavating oxidized material that is either immediately dumped and spread on an already reclaimed area or stockpiled for later placement. It's excellent for new plant growth." 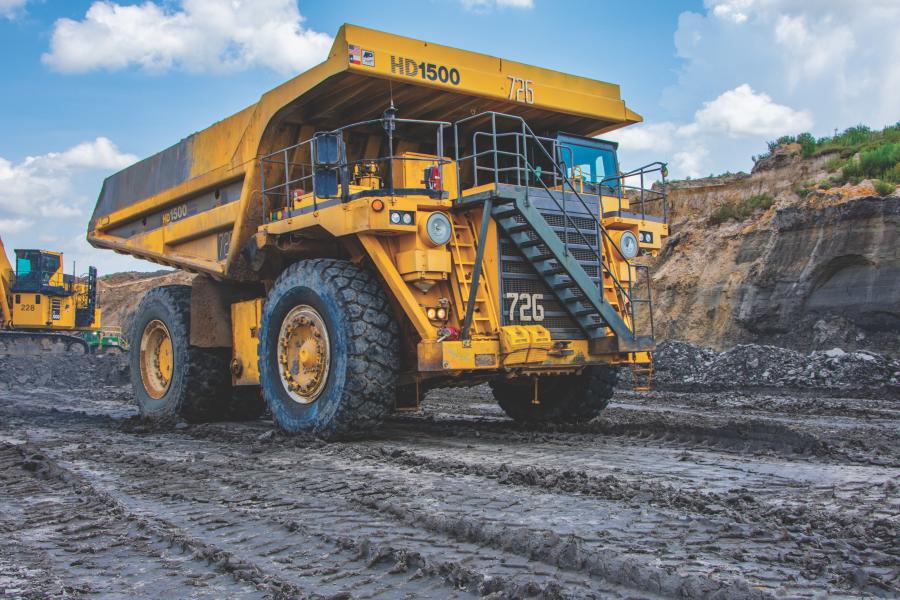 "One of the best features of the new PC2000 is the ability to perform multiple functions at once; for instance, I can hoist and turn or turn and dump at the same time," said Operator Everett Pierce. "That is more efficient and speeds up productivity, so we are moving more material per shift. It also burns nearly 60 gallons less fuel per shift, on average, compared to our other excavators. That adds up to significant savings.

"It's very well-balanced, and the cab is laid out nicely with everything at your fingertips or within easy reach," Pierce added. "It's comfortable and quiet, too. I also really like the 360-degree view on the monitor, so I can see all around and know if there is something next to the machine that's out of my sight before I swing or move."

Mine Supervisor Kevin Ray noted that maintenance is more convenient and easier to perform on the PC2000-11.

"Our service personnel like that everything is basically in one location with ground-level access. It takes less time to check and maintain. That equates to increased production," Ray said.

Once oxidized material is removed, Sabine Mining Company moves its dragline in to take larger bites of earth to quickly uncover the seams — which can be up to 100-feet deep or more. In areas under reclamation, that dirt is used as fill. Dozer operators place it to define contours in order to return the land as close to its original state as possible. Recently, the mine rented Komatsu D65PX dozers, including some intelligent Machine Control models.

"For the areas with soft ground conditions and limited space, the D65PXs work very well," said Ray. "They have the low ground pressure we need, and they offer the ability to get into places where a larger dozer is not feasible. We lean on them a lot for spoil grading variances and compliance. The intelligent machines are great for reducing surveying and helping operators reach proper contours more efficiently."

Backed by Service From WPI

WPI helps Sabine Mining Company with equipment purchases and rentals. Recent acquisitions were made with the assistance of Sales Representative Mark Bewley and Director of Major Accounts Frank Pagura, among others. WPI Technical Services Manager Mark Reeves works closely with Sabine Mining Company to ensure its equipment is supported properly. 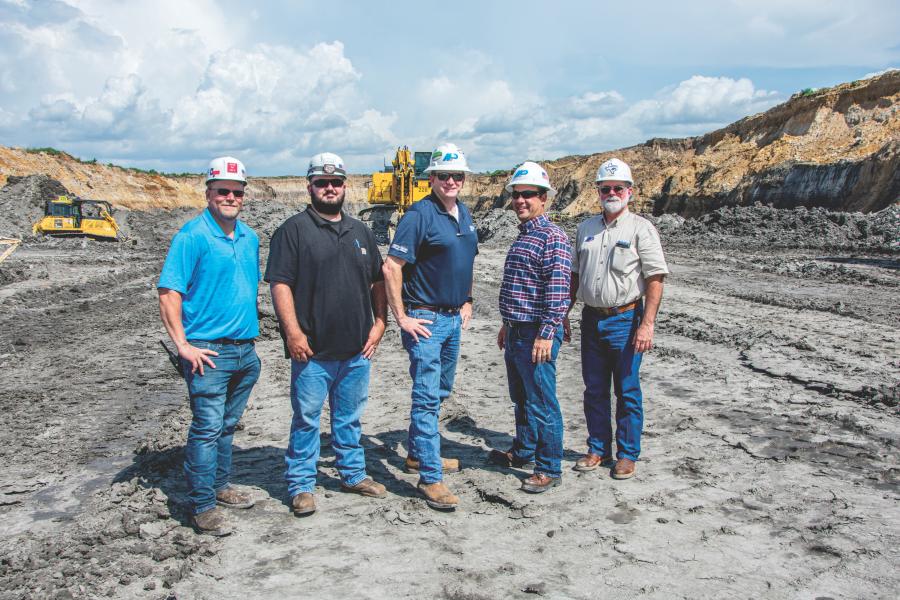 "Whenever we have had a need, WPI has been right there to help," said Fitzgerald. "They know how important it is to have the right equipment for maximum productivity, and they have provided training to ensure that our operators fully understand the functions and capabilities so they get the most out of the machines. That especially stood out on the new PC2000."

Ray added, "WPI understands that uptime is critical for us to meet our production goals. They have dedicated a full-time, resident technician to us, and when he's not servicing our Komatsu machines, he's helping out with other equipment. If we do have an unplanned issue, they are on it quickly, no matter the time of day. Across the board, WPI has been excellent to work with."

(This article, edited for space in CEG, originally appeared in the WPI Update Magazine, which is produced by Construction Publications, Inc.)