Construction continues at a steady pace at The University of Tennessee at Chattanooga (UTC), with work under way on new living quarters that will house 600 students. 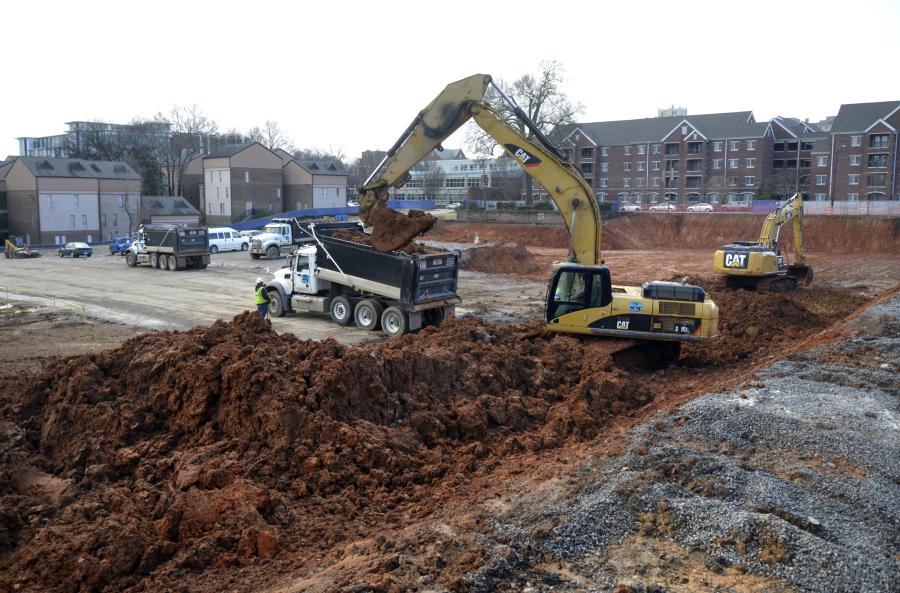 UTC University Relations photo. Construction continues at a steady pace at The University of Tennessee at Chattanooga (UTC), with work under way on new living quarters that will house 600 students.

Construction continues at a steady pace at The University of Tennessee at Chattanooga (UTC), with work under way on new living quarters that will house 600 students. UTC officially broke ground on the $70 million West Campus Housing Complex in November 2015.

“For the past decade, UTC has been the fastest growing campus in Tennessee,” said Yancy Freeman, assistant provost of enrollment services. “The demand for on-campus housing has surpassed what we have been able to accommodate, and we've had to put students up in hotels for several years.”

Originally designed to face McKenzie Arena, the more than 231,000-sq. ft. (21,460 sq m) complex was ultimately positioned in the opposite direction, in order to bring new energy to Vine Street. Located on the corner of Vine and Houston, the project will offer two stories of underground parking beneath the facility, adding 196,000 sq. ft. (18,208 sq m) of space and more than 600 parking spaces

“We know that students who live on campus make stronger connections and engage in the life of the campus at higher levels than their commuter counterparts, and so having more students live on campus is a way to improve student success. We want to be able to provide that experience to all students who want to live on campus,” said Freeman.

Freeman said the location for the new housing complex is a good fit, in more ways than one.

“With the opening of our new library last year, the Vine Street corridor has become increasingly important on our campus. We are seeing more and more pedestrian traffic in this area. Plus, the location allows UTC to make a greater connection with the downtown business district. Our students shop and go to movies and eat downtown already. This location just puts them closer to the action.”

For future residents of the building, construction can't be completed soon enough.

“The students can't wait. Many of them were involved in the planning of this building. They told us what they wanted to see included, so they are ready to move it as soon as it opens.”

As for the parking garage and retail space, said Freeman, “Like most college campuses, we have a tremendous need for more parking. This project is sitting on what was one of the biggest parking lots on campus, so we have displaced many cars with this project. From the beginning, we knew that it had to include parking, not only for the new residents, but for others, as well.

The retail and dining elements also are expected to promote activity in the area.

“Just as we hope this building will connect our students to downtown, we hope it will attract others to come to campus for shopping and eating. We are proud to be Chattanooga's university, and we want the citizens of Chattanooga to feel at home on our campus,” said Freeman.

The Tennis Center included in the plans is another anticipated addition, according to Freeman.

“This new facility will be outstanding. We have a very successful intercollegiate tennis program, but we've never been able to accommodate having the fans come out and watch the team play. This new facility will allow our tennis players to receive the recognition and support from their fans that they deserve.”

While much work remains on the project, Freeman said there have been no significant issues with the new structure, to date.

“So far, so good. We've had a relatively mild winter that has allowed work to continue making progress. We're excited about watching it come up,” said Freeman.

The facility on the west side of campus will include a bookstore outlet, a dining facility and a demonstration kitchen to help students transition to apartment living. Each room will be wired for gig service as well as wireless connectivity. The building also will feature a number of classrooms.

The structure was designed based on the idea that students who live and work together form closer ties with each other and to the campus. The new complex will focus on fostering a sense of community, with open spaces on each wing and floor and throughout the building and on the grounds.

The complex also is intended to serve as a connection point to downtown Chattanooga, encouraging students and faculty to be more involved in downtown through internships and research projects, as well as retail and residential options.

Steven Angle, UTC chancellor, and other dignitaries took part in the school's groundbreaking ceremony, which also featured community partners and officials with Hoar Construction, which serves as construction manager and general contractor.

Chris Potter, Hoar senior project manager said, “The project site is very tight, with minimal laydown area, so timely deliveries and precise coordination will be a must. This particular area collects a lot of water when it rains, so our water management plan will be critical, especially prior to the slab on grade being placed.”

The demolition of the existing racquet center was recently completed and mass excavation and shoring are currently underway.

“So far, we have been fortunate that we have not encountered any setbacks. The project is just starting, so basically everything related to the site, structure, skin and finishes has yet to be completed.”

There will be approximately 42,000 cu. yds. (32,111 cu m) of dirt excavated from the site. Some of the main materials required are stone backfill, concrete, rebar, drywall, metal stud framing, conduit and pipe.

Equipment being used on the project includes excavators, bull dozers and a dump truck, all for mass excavation. Crews also will erect a tower crane for materials handling, concrete pumps, rollers, bobcats and backhoes.

A parking lot and racquet center were located on the property before work began. Regarding early site work,

The project calls for housing, an underground parking garage and retail space. The parking garage and building are both concrete frames, so the structure will be the most time-consuming scope of work for the project. Hoar also is responsible for the new tennis center and courts.

“This will require demolition of the existing courts and regrading of the area where the new courts are being installed,” said Potter. “We will also be responsible for installing underground utilities to serve the new tennis center.

“Erosion control procedures will be a main focus for our team. We will perform daily inspections of the SWPPP provisions to ensure they are performing as required.”

In 2014, River City Company commissioned a plan to look at the underutilized parcels along Vine Street largely owned by Unum insurance company and UTC, regarding how to make the area an active connector between the downtown community and the university.

Kim White, president and CEO of River City Company, said, “The state-of-the-art student housing facility on Vine Street that broke ground in late 2015 is just the beginning of what we hope will be many substantial projects along the corridor.

“As the economic development engine for downtown Chattanooga, River City Company understands the importance of having a university like UTC in our downtown footprint, and how creating more housing and amenities will only add to the unique sense of place Chattanooga already claims for not only students, but also Chattanoogans.”

The new housing complex, said White, is an important one for the area, in terms of bringing students and community members together.

“The Vine Street connection from Georgia Avenue to the heart of UTC's campus is a flat, three-block walk. Within this stretch, we hope in the near future a density of housing, retail and restaurant options will be available for both student and non-student use.

“Knowing how critical having a top school of choice located in our downtown is, it's exciting for both the UTC community and the Chattanooga community. It's a fantastic use of the property, and a design that will complement the other potential projects for Vine Street.”

White, a UTC alumna, said, “The larger scope of the Vine Street corridor is to create an area that is dense with housing, retail and restaurant options. The idea of the corridor is to be able to connect some of the already booming activity in our Riverfront and City Center districts through additional activity on Vine Street all the way to UTC's campus.”

The projected completion date is January 2017 for the Tennis Center, while the housing facility should be finished by June 2018.