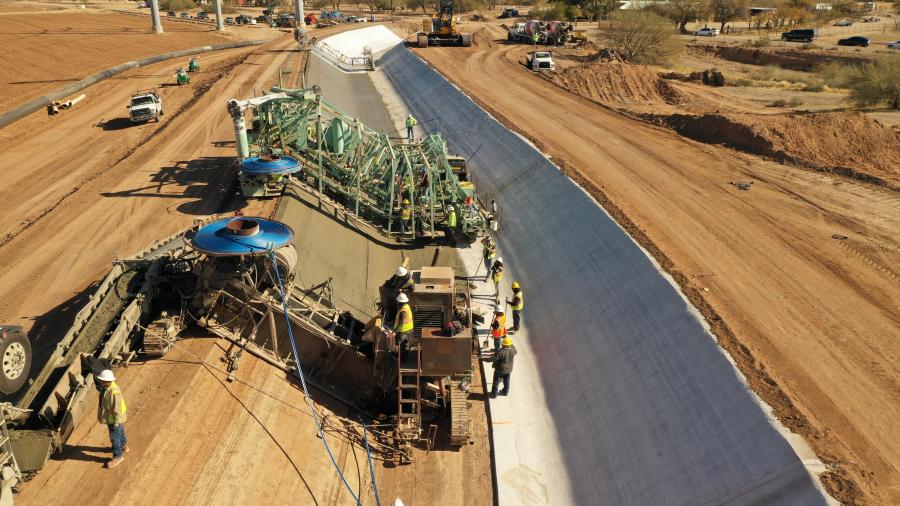 Brosamer & Wall Inc. recently completed the $52 million second phase of the Florence Canal Reach 2 Rehabilitation and Lining Project in Arizona by utilizing a 3,000 PSI mix for concrete, a material not usually seen in similar projects. (Photo courtesy of Brosamer & Wall.)

The firm is aiming to complete the rest of the Pinal County, Ariz., project checklist by January 2023.

The project is based on concerns of excessive seepage losses. The primary purpose of the project is to address agricultural water management, supply and conservation issues affecting the San Carlos Irrigation And Drainage District (SCIDD). 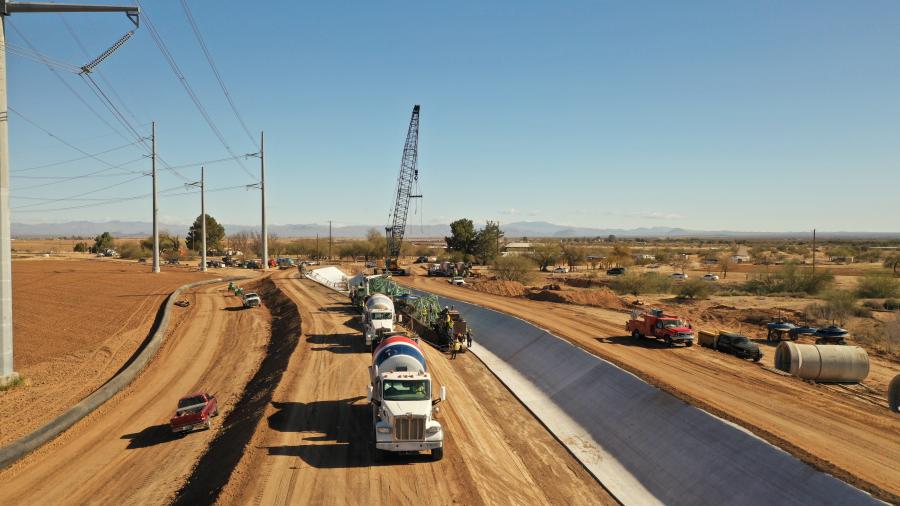 What makes this project unique is the material that is being used. The SCIDD dries the canal twice a year — in mid-October for six weeks — and then returns the water for four weeks, followed by another five dry weeks.

"We put in long hours during those weeks to ensure everything was done within the timeframe," said Russell P. Gonzalez, B&W's project engineer. "We used a 3,000 PSI mix for the concrete. With these types of canals, it requires a certain level of air for the mix and a fiber in the substrate of the concrete that one does not normally see in other projects."

The work to improve the canal was essential.

"These upgrades are needed to update the aging structures, improve the hydraulic efficiency of the system and minimize canal system water losses," said Shane Lindstrom, general manager of SCIDD. "This 130-year old earthen canal will be concrete-lined, with five new check structures, 27 turnouts and modern electronic and manual flow measurement.

The project features canal excavation, compacted embankment and embankment construction, soil blending, trench excavation and backfill, riprap with geotextile fabric, cleaning and stockpiling of riprap for reuse, the building of reinforced concrete structures, canal trimming, concrete lining with fibrous reinforcing that includes hand placed concrete lining with fibrous reinforcing; and the installation of reinforced concrete pipe along with 78-in. and 54-in. concrete siphon pipe extensions; and other mechanical work. 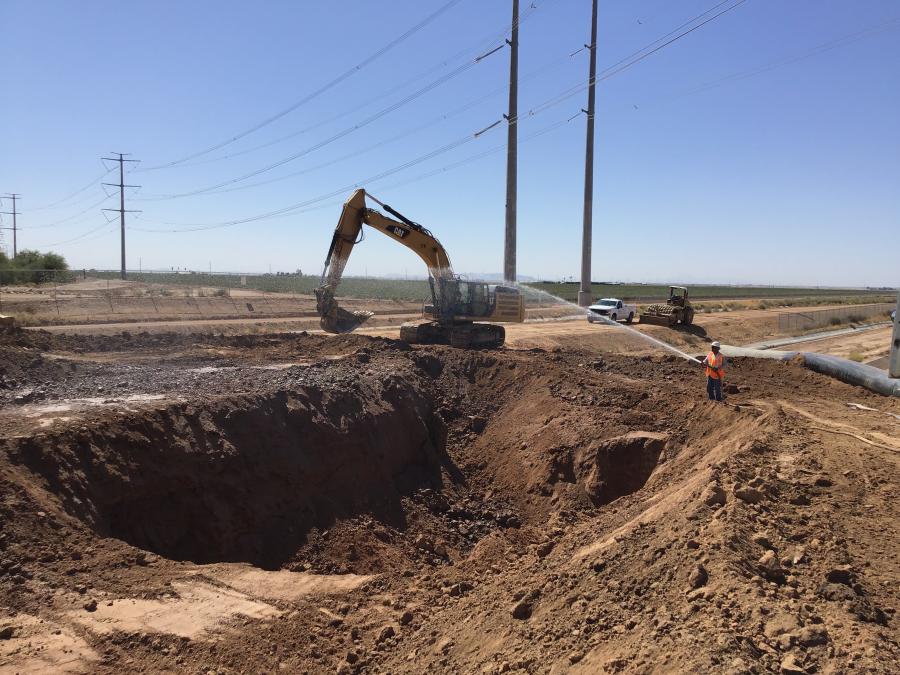 To date, Brosamer & Wall has completed all the canal excavation, paving and lining, installation of all the substructure and turnouts, as well as the gates and radio gates.

"There is one structure left where have to install gates and we need to install all the electrical and solar equipment," said Gonzalez. "Next season we'll start doing the road crossings, which [brings] everything together.

"We started at the end of the project and worked our way to the beginning in the first season, which started in late August 2020 and went to January 2021," Gonzalez added. "We covered six miles. Then we went to the beginning because there was some land acquisition and utilities to be moved in middle part of the project. We went downstream from April to May, paving all of it. In August 2021 we were working in the middle and completed all the paving last January."

It took approximately three days for the concrete to cure and gain strength. The concrete lining is 4 in. thick.

Jayco, a subcontractor, performed the earthwork

"They kept ahead of the canal trimming and lining," said Gonzalez. "In one segment of the project we installed a water bypass to allow the earthwork to start eight weeks before the scheduled dry up period. Once you build a canal, you have to start the trimming process no more than two days before you pave. That is where you go with the trimmer and shave about six inches."

While this was Gonzalez's first canal project, he was surrounded by many with a wealth of experience.

"Our owner, Bob Brosamer, has been building canals for more than 30 years," said Gonzalez. "John Pologar, our project manager, this will be his eighth canal project. Our superintendents, Mike Newman and Jack Beale, have more than 20 years of experience. Basically everyone on the project had a lot of canal experience."

Precast concrete elements were utilized, including those for the turnout structures, which were supplied by Jensen Precast .

"The turnout structure was five to seven days to build," said Gonzalez. "The curing took a few days and then they were transported in two, top and base."

The structures were set in using a 250 ton hydro crane, which was supplied by Marco Crane and Rigging Company.

Reinforced concrete pipes were required for the turnouts — 36-in. and 24-in. — which were manufactured by Forterra, a local supplier.

Also installed were steel pipes at well discharges and 54-in. and 78-in. reinforced concrete low head pressure pipe.

The lining of the canal required approximately 29,000 cu. yds. of concrete.

"On average, we were doing about 3,000 linear feet a day and on a good day, about 5,000 linear feet," said Gonzalez. "The check structures were built before or at the same time as the paving. In two areas the check structures were already built, so as we paved up, we used a crane to jump each piece of paving equipment. We would be able to jump all the equipment and start back up within two hours, usually we would make this day our short day and resume the next day." 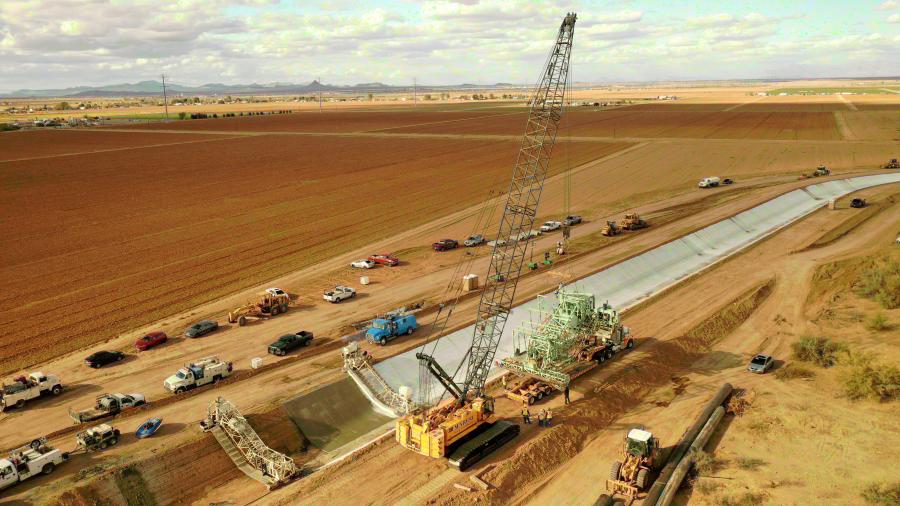 The jumping required coordination to move the equipment to the other side. Hunter Contracting was responsible for all the cast in place structures, which was approximately 6,000 cy. yds.

Equipment in these operations consisted of a Case 621B loader and a Cat 302D excavator. The excavation operations has crews using excavators, a 14G Cat motor grader, a 289 Cat skid steer and a Cat D6 dozer.

"The soil did not affect the equipment," said Gonzalez. "There were times when we had a track go out. Sometimes we would be able to fix it — it would be down for 20 to 30 minutes. We'd have a hydraulic line go down and be able to fix it on the spot. There were a few times when something would break down for a day. We had our mechanics on-site to take care of equipment large and small.

"Ken Gilmour configured all the paving equipment," he added. "He's been in the canal industry for a long time.

The project has its challenges, such as paving in the hot Arizona summers.

"It gets up to 110 and 120 degrees," said Gonzalez. "To keep the work moving in April and May, we started paving around 11 p.m. until 5 or 6 a.m. — before it got too hot. CEMEX added ice to kep the mix cool and sprayers would spray the drums on the outside to keep the concrete cool."

The crews were well hydrated, but working at night was not uncomfortable until the morning when the sun began to shine.

"There were electrical and gas utilities that needed to be relocated," said Gonzalez. "Some of the lines were too low and had to be moved and raised. It was a challenge working with the utilities — trying to work around them and with them to keep the work moving. For soil, there were some areas with unsuitable soil, heavy clay, but that was accounted for in the estimate and specifications. In those areas we removed the unsuitable material and replaced it with good soil. Our goal was to keep all operations going to stay on schedule for the canal lining.

"The original canal was a dirt-lined canal," he added. "We widened it, built it up, and lined it with concrete. There were some areas where there was going to be a new alignment, so we built a new portion." CEG