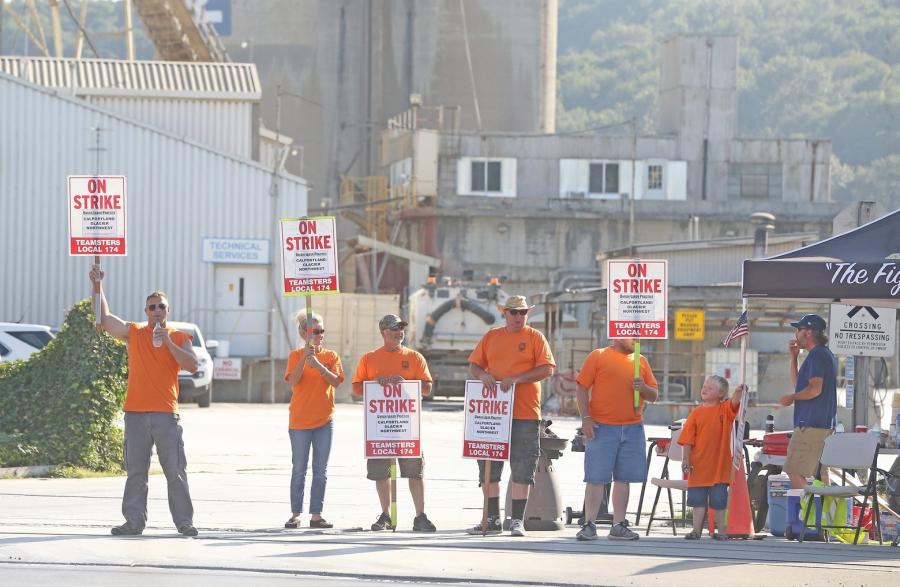 More than a quarter of King County's concrete delivery-truck drivers have gone on strike, and the rest could soon join them — threatening to delay dozens of projects amid the region's record construction boom.

The work stoppage has halted some concrete deliveries for nearly a week at a time developers are rushing to take advantage of the prime summer construction season.

In the core of Seattle alone, there are 74 major construction projects underway now, with others spread out around the region.

The ready-mix concrete trucks, with their spinning, cylindrical drums, are a staple at construction jobs.

But the 300 Teamsters members who drive the concrete trucks in King County have been working without a contract with five local companies since the beginning of August.

Drivers for one of the concrete suppliers, CalPortland, walked off the job this past Friday. After a meeting for union workers Aug. 16, Teamsters spokeswoman Jamie Fleming said there is a “pretty high likelihood” that the workers for the other four companies will begin striking soon,barring a sudden turnaround in negotiations.

CalPortland said in a statement on its website that the walkout has already left “dozens of projects in jeopardy,” and caused “untold financial damages.” It said the drivers “simply abandoned” trucks filled with perishable concrete at plants when the walkout began the morning of Aug. 11, posing the potential to damage the trucks if they weren't unloaded while the concrete could be moved.

“Several CalPortland customers sustained damages because of project (concrete) pours that were started and then abandoned, left unfinished, due to this deplorable action,” CalPortland said in another statement, released Wednesday.

The CalPortland drivers make up about 28 percent of the union concrete-truck drivers in King County.

The companies involved in the negotiations are California-based CalPortland, Seattle's Salmon Bay Sand & Gravel, Renton-based Stoneway, and Lehigh Cement and Redmond-based Cadman, both owned by the Texas company Lehigh Hanson.

The union members voted to authorize a strike against the companies a few weeks ago. But the union decided first to picket just CalPortland, which Fleming described as the “spokesmen” for all the companies and the one giving the union the most trouble in negotiations.

Any decision to strike against the other four suppliers would be made by union leadership, and a strike could begin without further notice, she said.

As is often the case in closed-door labor negotiations, the sticking points are unclear: The union says it's upset that the companies aren't bargaining in good faith. CalPortland says the union proposals are economically unsustainable.

The average driver makes about $31 an hour, according to the union.

CalPortland said it has offered a 12 percent pay and benefits increase over three years. The union declined to release its proposal.

The companies and the Teamsters have been meeting with a mediator — together and separately — with the most recent talks taking place Tuesday. Both sides said the talks this week did not go well.

Construction-worker strikes happen occasionally in the Seattle area. A year ago, some projects were briefly slowed when window installers walked off the job. During the last construction boom a decade ago, strikes by fire-sprinkler installers and a different union representing concrete workers also halted projects.