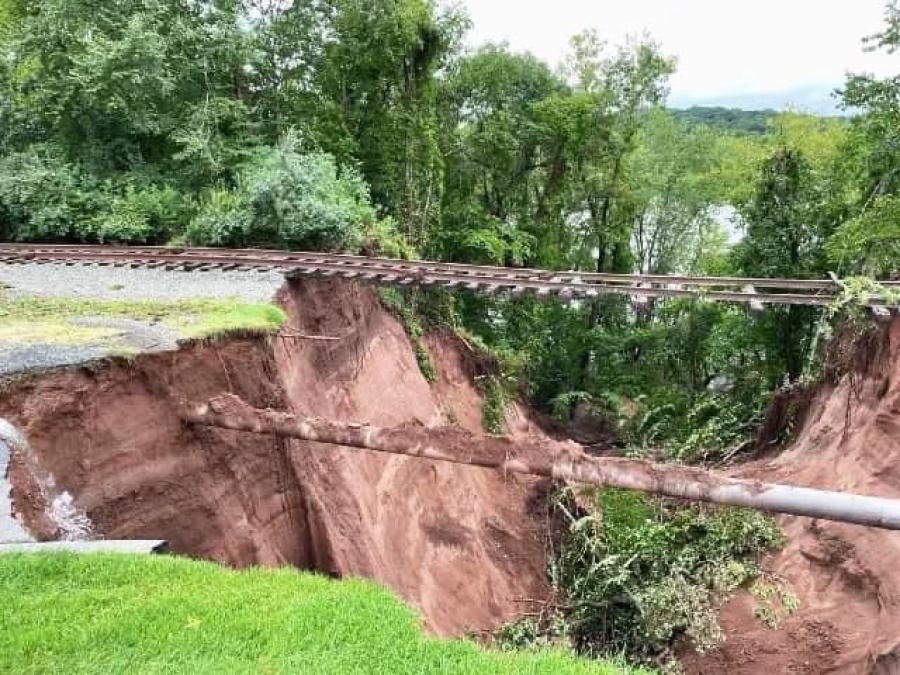 A massive sinkhole opened up following storm Ida, leaving the railroad tracks in the air near the 13th hole at the TPC at River Highlands in Cromwell. (IAFF Local 4662 photo)

The Connecticut Department of Transportation (CTDOT) has assumed remediation of the "slope failure" caused by Tropical Storm Ida's heavy rains near the TPC River Highlands in Cromwell, which left a refined products pipeline exposed and dozens of feet of train rails unsupported.

The massive sinkhole opened near the PGA golf course's 13th hole on Sept. 2, where large amounts of earth washed down a steep incline toward the Connecticut River. Left hanging were a railroad line owned by the Providence and Worcester Railroad Co., and a jet fuel line operated by Buckeye Partners, a Texas-based petroleum distributor.

Cromwell Fire Chief Jason Balletto told the Middletown Press that the fuel line was not compromised because of the washout, noting that his department responded after a crew member saw a post about it on Facebook. He added that Providence and Worcester Railroad crews also would be working on addressing the problem.

In addition, the storm-generated landslide uprooted trees in the area, which contributed to the sinkhole. Part of a golf cart path also tumbled down the hill as a result.

Kevin Nursick, a CTDOT spokesperson, said construction is now under way at the site and should be completed soon.

"Work is currently taking place to relocate the pipeline away from the slope failure," he noted in an agency statement.

At the same time, Nursick said, crews have "begun and are performing design activities" to address the slope failure as well as some drainage improvements. Construction will progress in stages and include clearing for an access road.

Neighbors said they had concerns about the spot after heavy rains in June washed away some of the rocks and gravel used to support the railroad, adding that one side of the tracks was left suspended. They told CT Insider that railroad crews were dispatched at the time to fill the gaps.

Nursick said the state will work to stabilize the slope and prevent future washouts by creating drainage and other preventive measures.

It also is possible the Federal Emergency Management Agency (FEMA) could reimburse some the state's costs.

"We do not yet have cost estimates, but FEMA is involved and there may be some federal relief associated with this," he said.

Ida also damaged part of Connecticut Route 9's Exit 19 southbound ramp, where Nursick said a metal culvert that runs underneath the ramp, and into the right of way on both sides of it, had washed out during the heavy rains.

That damage is now fixed, and the roadway is operating normally.

But, Nursick told the Middletown news outlet, his department has needed to go back and do additional work for other damage that occurred at the inlet of the culvert. He noted that CTDOT also needs to assess what corrective measures must be taken to repair the spot and prevent a similar washout from happening in the future.

"We had multiple issues across the state during the weather event," Nursick said to the Press, adding that they affected many of Connecticut's highways and secondary state routes.

But he also explained that no serious damage to the state's highways was reported.

"The highway system recovered quickly after the rain subsided, with flooding dissipating once the rainfall let up,"" Nursick noted.

That is the good news, the Press reported, but Nursick said Connecticut's secondary roads, as well as many municipal routes, did not fare as well. In all, 27 secondary state roadways were closed because of flooding, fallen trees or power lines, and washouts due to Ida.

"We responded quickly once conditions allowed," he said. "The majority of those closures were associated with water over the roadway.

"We're glad it's behind us," Nursick told the Middletown newspaper.