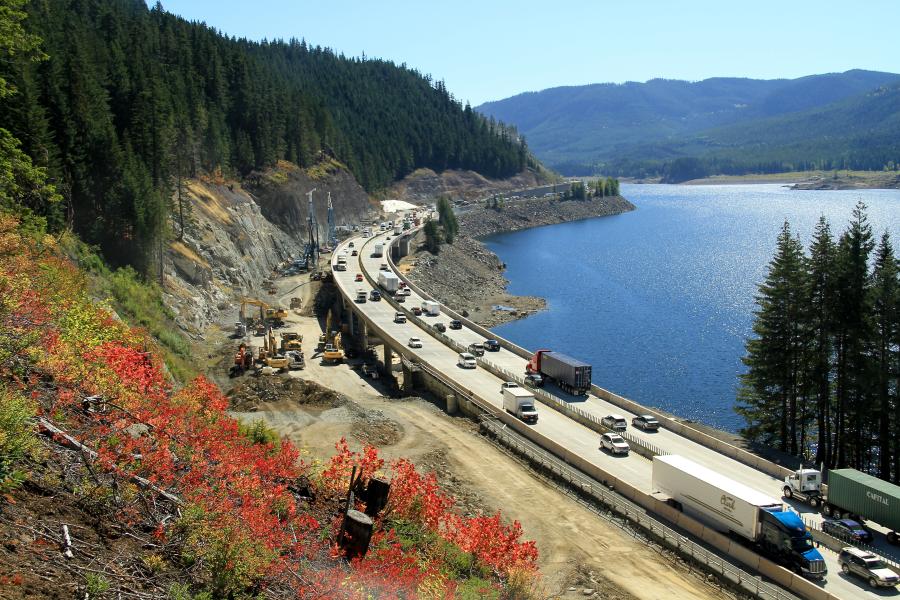 KLB Construction and the Washington Department of Transportation enter the next phase of construction of the I-90 Snoqualmie Pass East project.

A nearly $1 billion job to make a major artery connecting population centers from eastern to western Washington is about to enter the third of four phases, but early on the planned project encountered a glitch that could have brought it to a halt. 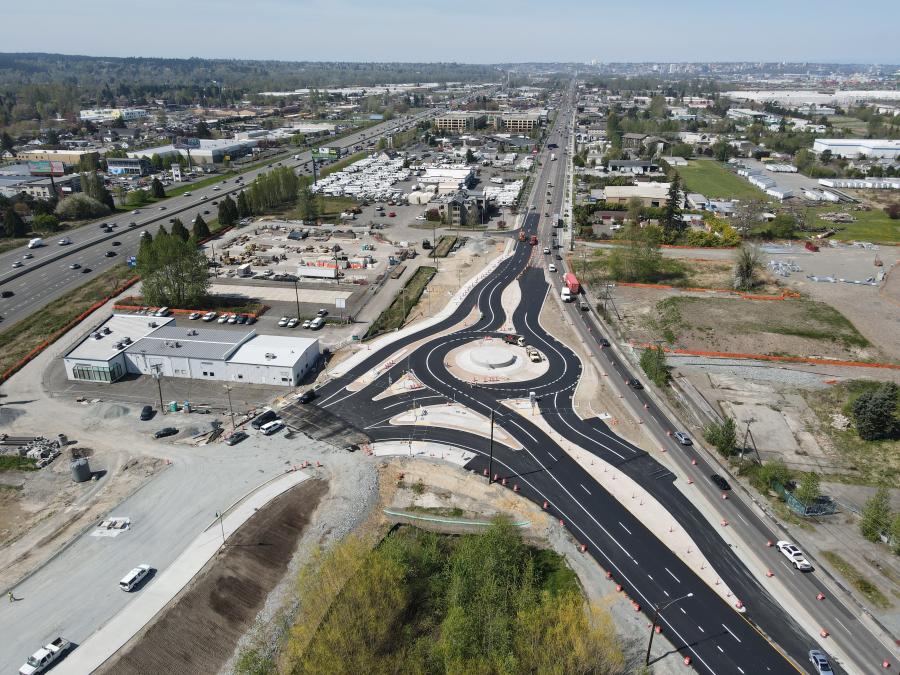 The I-90 Snoqualmie Pass East project spans a 15-mi. stretch of I-90 from Hyak to Easton that "is essential to our quality of life and the economic vitality of Washington state … to meet both the current and future needs of this transportation corridor," according to the Washington Department of Transportation (WSDOT).

The third phase is expected to go to bid this fall and covers nearly 6 mi. Completion is set for 2025. KLB Construction is the primary dirt mover.

The final 2 mi. of Phase 1 was completed in 2019. That included widening I-90; replacing and building new bridges, two of which are new avalanche bridges; stabilizing rock slopes; and expanding chain up and chain off areas. It also included two 150-ft. wildlife undercrossings and two 900-ft. long wildlife crossing bridges. Phase 2 and 2A covered the next 2 mi. of the corridor and featured similar upgrades, along with the wildlife crossings. It was also completed in 2019.

Phase 3 widens I-90, builds truck climbing lanes and straightens curves, while Phase 4, scheduled to begin in spring 2026, does the same, plus expands chain up areas. Like earlier phases, both 3 and 4 add wildlife connectivity — a near deal breaker back in the 1990s when the project was still in planning stages. Today, there are approximately 100 crossings in numerous forms. 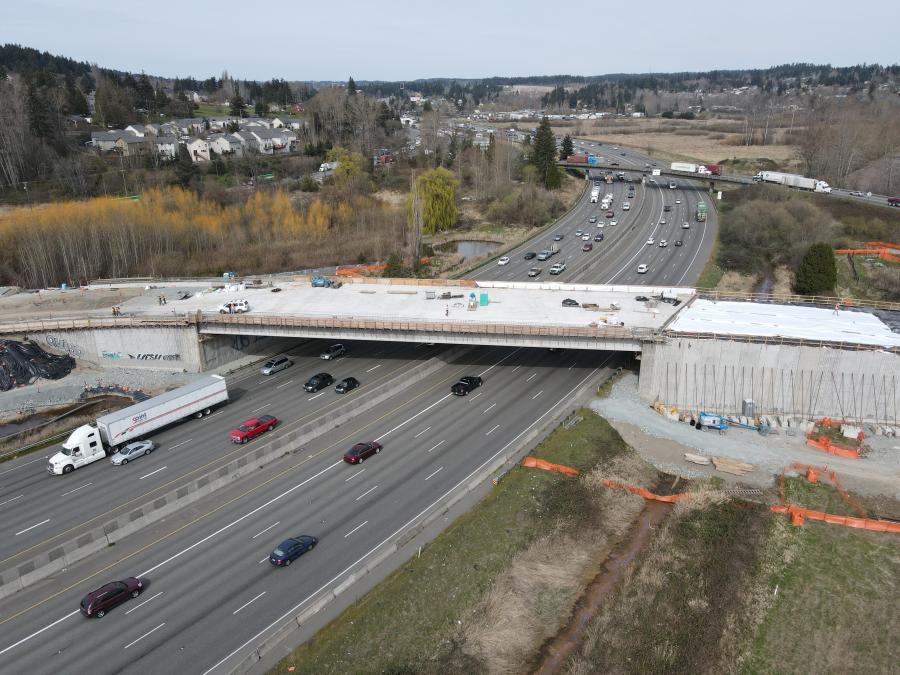 Along with connecting major metro areas along a freight corridor, the highway is a long established wildlife crossing. The U.S. Forest Service wouldn't grant WSDOT an additional easement for the road work unless the state agency complied with management plans to make those crossings safer for the abundant wildlife — and by extension, motorists.

"Using the easement was cheaper than buying land," said Brian White, WSDOT project engineer. "But if we didn't deal with wildlife connectivity, the project would not be in compliance and we couldn't get the grant easement. We were going to have to figure out a different way to do the project."

Engineers looked at crossings that had been built in other areas, particularly in Banff, Canada, where some of the first wildlife crossings were installed. They asked questions like what should a crossing look like, where was the wildlife moving and how to encourage the wildlife to use the crossings. WSDOT decided the crossings had to be wide enough so wildlife didn't see it as a narrow dark hole, and that bridge abutments would not have ledges which wildlife don't like since there could be predators.

"The people who actually constructed the first crossing, they're very proud of building that wildlife crossing," White said. The bridge crossings are very similar to those in Banff — with a few differences.

"In Banff, they did fences," White said. "We put walls in ours so wildlife can't see headlights. In Banff, it's more of an earth structure, arched, partly because it is easier to construct. We brought in precast structures, put them over the roadway and covered them with fabric to make sure no wire gets through. Then we placed some drainage material and soil. And then, we place rocks and trees so it kind of mimics natural landscape. We are in the process now of planting native plants."

The equipment on site is standard, including cranes, backhoes and excavators, both leased and owned. 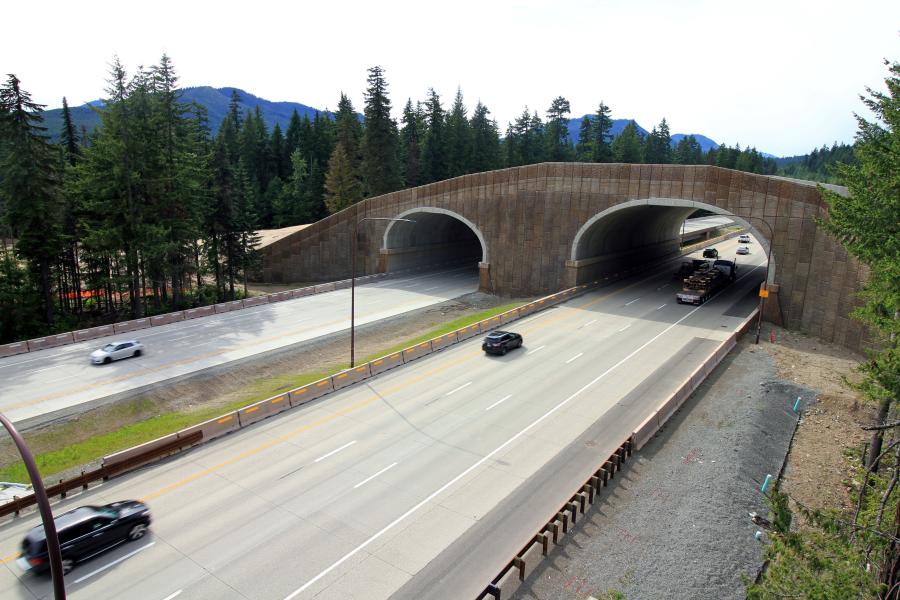 "One of the challenges was you are building this mound over the Interstate. So to get the material where you need it — over arches—you have to backfill uniformly. The contractor brought out a conveyor belt and placed it over the top.

"Once the project was completed, people would ask, ‘Are the wildlife using it?'" White said. "The first crossing was a coyote; everyone was excited. Now, we're seeing a lot of crossings. One of the things we learned in Banff is that it takes five years for wildlife to really use it. We'll see wildlife trickle through, but after five years they realize it is a safe passage and we'll see wildlife increase."

The wildlife bridge crossing in Phase 3 will be similar to that in Phase 2A, but this time instead of asking the questions, WSDOT is answering them from other state agencies interested in building safe wildlife crossings.

"It's going to be very similar to phase 2A, an arched structure," White said. "Originally, when we first started the project, the design visualization showed a bridge. That was kind of our calling card at the public meetings. Now, it is going to be an arched structure. There is a need for it. It's a good feeling to know we are finally there."