ConocoPhillips Alaska has made a new oil discovery in the Greater Mooses Tooth Unit located in the northeastern portion of the National Petroleum Reserve. 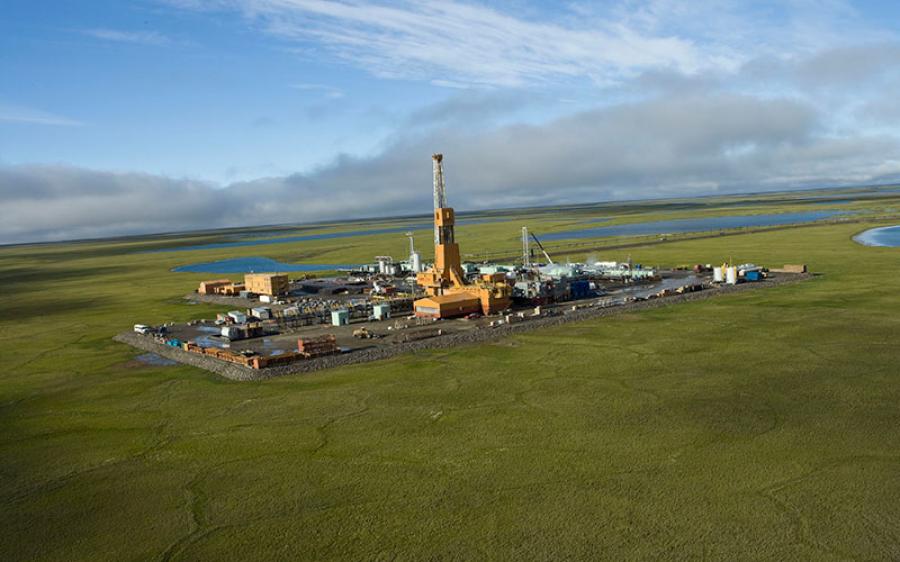 ConocoPhillips Alaska has made a new oil discovery in the Greater Mooses Tooth (GMT) Unit located in the northeastern portion of the National Petroleum Reserve–Alaska (NPRA).

The Willow discovery wells, Tiŋmiaq 2 and 6, were drilled in early 2016 and encountered 72 ft. and 42 ft. (22 m and 13 m) of net pay, respectively, in the Brookian Nanushuk formation. ConocoPhillips has a 78 percent working interest in the discovery and Anadarko Petroleum holds the remaining 22 percent.

The two discovery wells lie about 28 mi. (45 km) west of the Alpine Central Facility, and are approximately 4 mi. (6.4 km) apart. The Tiŋmiaq 2 well was tested and established good reservoir deliverability with a sustained 12-hour test rate of 3,200 bpd of 44-degree API oil.

Initial technical estimates indicate the discovery could have recoverable resource potential in excess of 300 MMbbl of oil. Appraisal of the discovery will commence in January 2017 with the acquisition of state-of-the-art 3D seismic. Subject to appraisal results and the choice of development scenario, Willow could produce up to 100,000 bopd. Assuming timely permit approvals and competitive project economics, initial commercial production could occur as early as 2023.

“This discovery is tremendously exciting not only for ConocoPhillips, but also for the state of Alaska,” said Joe Marushack, president, ConocoPhillips Alaska. “Willow's proximity to existing infrastructure improves the economic viability of the discovery. Development of Willow, a potential multi-billion-dollar investment, could provide thousands of jobs during construction and could generate substantial revenue for the federal government, state, North Slope Borough, and communities in the NPRA.”

“The Willow discovery adds to our history of exploration success in the NPRA and is consistent with our focused global exploration strategy,” commented Richard Lunam, president of exploration, business development and other international for ConocoPhillips. “The acreage acquired in the recent state and federal lease sales gives us running room to test the concepts that led to Willow and other NPRA discoveries.”

Besides exploration activities, ConocoPhillips continues to make substantial investments in new projects on the North Slope. In 2016, the company approved additional drilling at CD5, contracted with Doyon Drilling for a new-build extended reach drilling rig, and commissioned two new rigs for the Kuparuk River Unit. This winter, construction will begin at GMT1, a drill site eight miles west of CD5.

The cost to develop GMT1 is approximately $900 million gross with peak production estimated at 30,000 bopd gross. First oil is planned for late 2018. In addition, permits have been filed for GMT2, located about 8 mi. (12.8 km) west of GMT1. GMT2 is estimated to cost more than $1 billion gross with peak production estimated at 25,000 to 30,000 bopd gross. A seismic survey over GMT2 and Willow is also planned in the first quarter of 2017. First oil for GMT2 is dependent upon the time to acquire federal permits, but is anticipated to be 2020 or 2021.