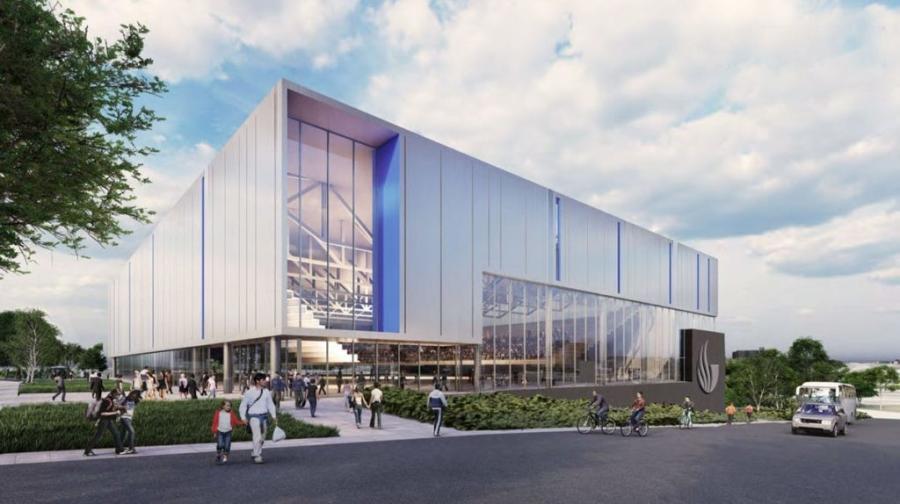 Work has begun on a new Georgia State arena in the former parking lots of Atlanta Stadium and Turner Field, as the school continues its expansion at a six-acre site just north of Center Parc Stadium. (Georgia State University rendering)

Work has gotten under way to build a new convocation center and arena for Georgia State University (GSU) on land that has in the past served as the parking lots for both Atlanta Stadium and Turner Field.

The $85.2 million facility, at the intersection of Fulton Street and Capitol Avenue, is a continuation of GSU's expansion at a six-acre site just north of its Center Parc Stadium, which itself was the former Turner Field and 1996 Olympic venue. After acquiring the former home of the Atlanta Braves, the university converted it to a college-football facility before implementing a master plan for redevelopment of the rest of the site.

Construction on the building is expected to be completed in August 2022.

First announced in 2018, the flexible interior spaces of the new GSU arena will accommodate as many as 7,300 people for basketball games, 7,500 for graduation events and 8,000 for concerts, according to Ramesh Vakamudi, vice president of Georgia State facilities management.

The new facility also will include classroom and academic support space as well as the ability to accommodate large conferences and sports tournaments.

"The vision for this facility, and the direction we got from President Becker, was for this to be a truly multiuse facility," Vakamudi said. "This is a facility that is desperately needed by Georgia State, which now graduates more than 10,000 students per year."

The convocation center will be an upgrade from the Georgia State Sports Arena, which was constructed in 1972 and has a maximum capacity of 3,500 seats.

Birmingham, Ala.-based Brasfield & Gorrie is the construction manager of the project, with the support of SLAM/Heery/Perkins & Will, a collaborative of design architects; and Gleeds, a leading global property and construction consultancy in Atlanta.

The university's new facility also will sit across the street from the soon-to-be-revitalized Ramada Plaza by Wyndham Atlanta Downtown & Conference Center hotel.

Pellerin Real Estate in Atlanta has purchased the building with the intent to update the 16-story tower, the company announced in early November.

The 375-room Ramada Plaza also is adjacent to the new $750 million Summerhill Development, an 80-acre mixed-use project led by Carter Developments and GSU that is already under way. Phase I of the Summerhill development will encompass 306 multifamily apartments with 8,575 sq. ft. of ground-level retail, 82,000 sq. ft. of grocery-anchored retail, the redevelopment of 47,000 sq. ft. along Georgia Avenue, a 676-bed student housing project, 100 townhomes, and build-to-suit Class A office space.