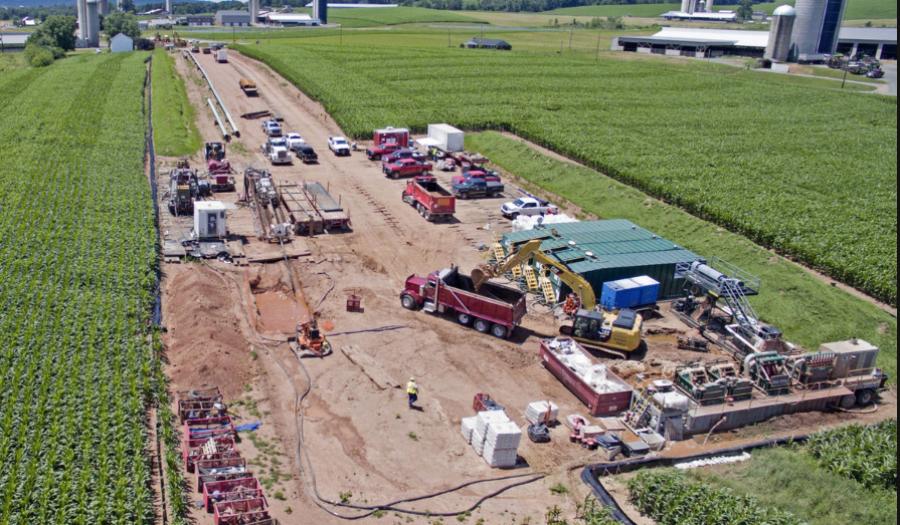 Workers were moving pipeline into place for the Mariner East gas pipeline in a path cut through a cornfield along Route 897 east of Sportsman Road in West Cocalico township. (Blaine Shahan photo)

In Lancaster County, the pipeline — highly controversial and contested in some parts of the the state — affects farmland and the Middle Creek Wildlife Management Area in Clay and West Cocalico townships.

This week, crews hired by Texas-based pipeline owner Energy Transfer Partners welded sections of pipe together and moved earth on rights of way.

The Mariner East project consists of laying two pipelines, with diameters of 20 inches and 16 inches, in the enlarged existing right-of-way where an old pipeline used to carry oil products from a Marcus Hook refinery near Philadelphia to western states.

As part of an earlier phase, that pipeline was replaced in 2014 to carry natural gas liquids such as ethane and propane.

The resulting propane, ethane and butane can be used to make plastics, burned for home heating and blended into gasoline. They will be sold in the United States and shipped by boat overseas.

About 8,000 workers are involved in the project, which is expected to be complete by the end of September.

In the portions of Clay and West Cocalico townships affected by the pipeline, the work temporarily impacts Cocalico Creek, Little Cocalico Creek and Harnish Run, and tributaries. Some wetlands will be temporary affected, according to the state Department of Environmental Protection.

Officials for the two townships told LNP that the pipeline faced no opposition. In Clay Township, the pipeline work is entirely through the Pennsylvania Game Commission's Middle Creek wildlife area.

In West Cocalico, farmers seemed to have been satisfied with compensation and guarantees to buy both this year's and next year's lost crops, an official said.

The project has faced protests and court opposition from residents in other counties, such as Delaware, Chester, Cumberland and Huntingdon.