The Northwest Arkansas Democrat-Gazette reported that for the past decade, the north guardrail of the Lafayette Street bridge has bulged out. 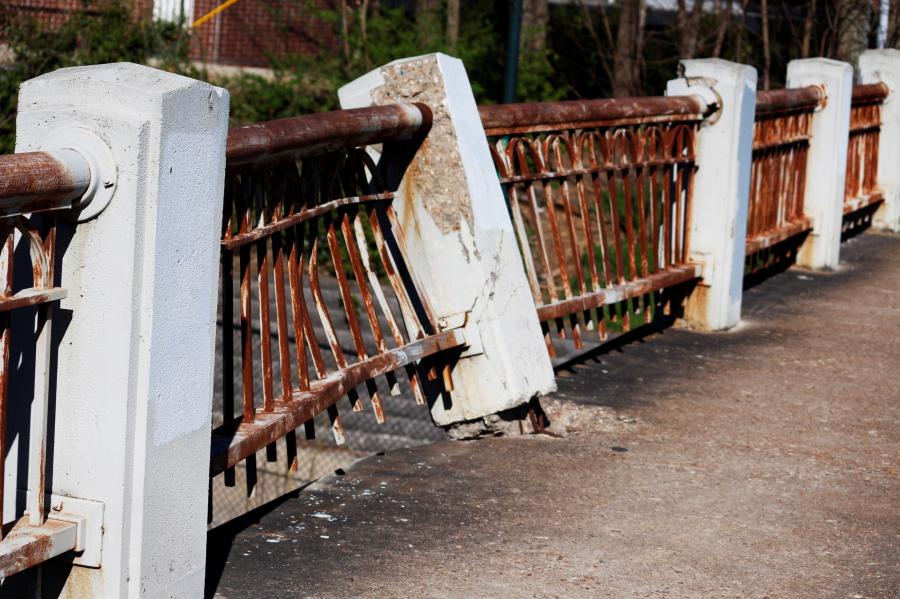 FAYETTEVILLE, Ark. (AP) Work has begun to restore a rusty, graffiti-covered art deco bridge in the heart of Fayetteville.

On April 7, workers removed the damaged guardrail as part of the restoration. On the other side of the bridge, they're trying to figure out how to fix a retaining wall that's 14 in. (35.5 cm) out of plumb and leaning toward the south.

As soon as they're done with the Lafayette Street overpass, restoration work will begin on a similar bridge a block to the north on Maple Street. Restoration of both bridges is to be complete by Sept. 9.

Built during the Great Depression, the Lafayette and Maple street bridges spanned the tracks of what was then the St. Louis & San Francisco Railway and is now the Arkansas & Missouri Railroad.

The concrete bridges connected the University of Arkansas campus to the city's business and residential districts. They replaced two narrow wooden bridges the Frisco railroad built around 1900, according to the Historic American Engineering Record.

For most of the 20th century, the concrete bridges were an impressive part of the city's infrastructure, echoing the architecture of some of the university buildings of that era.

“They were beautiful,' said Paula Marinoni, a preservation advocate whose family has lived on Lafayette Street for 111 years.

She said electric lights accentuated the beauty of the bridges. The lights were recessed in concrete bridge posts at traffic level and behind “heavy glass globes,' according to a 1936 newspaper article. The lights created a diffused soft glow over the entire bridge. The Lafayette Street bridge had eight lights, and the Maple Street bridge had four.

“It's the type of thing that is an art form that affects you, even as a child,' said Marinoni. “I remember as a child walking across those bridges and looking at it all the way across, how beautiful it was and how it flowed. And as I walked across it, I was a part of that flow.'

But the bridges have been dark for decades.

As the Dickson Street entertainment district and old Shulertown neighborhood went through gentrification in recent years, the nearby bridges decayed.

The Lafayette Street bridge is one block north of Dickson Street.

Fayetteville leaders studied the bridge situation for years before awarding a contract last fall to Crossland Heavy Contractors of Columbus, Kan., to do the $1.73 million restoration on both bridges. The federal government will pay $1 million. The city will pay the rest.

“The existing sidewalk is not only narrow, but it's broken up and chipped,' he said. “We tell people its an aesthetic issue. Obviously, we want to make the bridges look better but they're also doing some structural repair that will extend the life of the bridges.'

The lights also will be replaced, Brown said. He said the restoration work should take about three months on each bridge. During that time, the streets will be closed in the block that contains the bridge being restored.

The Maple Street overpass was constructed by Fred Lutt¡johann Construction Co. of Topeka, Kan., for $14,154, which would be $241,444 today, based on inflation.

While the bridges appear similar in construction, they're actually quite different, according to the Historic American Engineering Record. That's because the topography was different between the location of the two bridges, even though they're only a block apart.

At Maple Street, a “deep cut through a rock ledge' was required to build the railroad, which was completed in 1881. That deep cut allowed for the economical construction of an arch. But at Lafayette Street, a lower elevation and wider right of way necessitated construction of a simple continuous girder span.

Brown said the restoration work will include pressure-washing underneath to clean the structures and remove any graffiti. A clear coating will be applied that will make it easier to remove graffiti in the future.

An average of 949 people per day pass underneath the Lafayette Street bridge on the Frisco Trail, which is part of the Razorback Greenway trail system. On some days, the number is higher than 2,000. The trail doesn't go under the Maple Street bridge but it does run along the east side of that bridge.