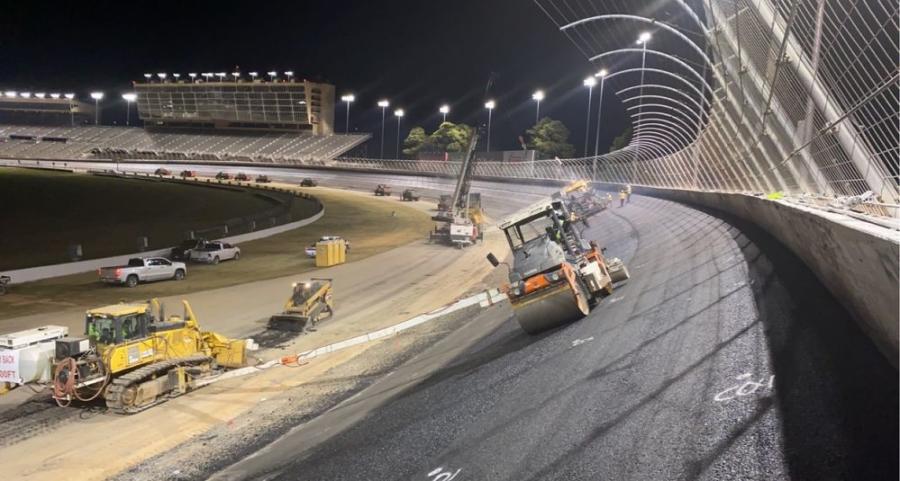 Crews increased the banking at the track from 24 to 28 degrees, providing the potential for the racetrack to be one of the fastest in the country.

The Atlanta Motor Speedway (AMS) has hosted racing events of all types for more than 60 years. But it was time for a change. The racetrack was last paved in 1997, so track officials decided to get radical. Not only did they decide on fresh paving, but also to increase the banking at the track from 24 to 28 degrees, providing the potential for the racetrack to be one of the fastest in the country.

The new racetrack will be a little more than 1.5 mi. around and narrower than the previous configuration from 56 to 42 ft. A total of 70,000 to 125,000 spectators will be able to view the races, depending on the layout of the track. 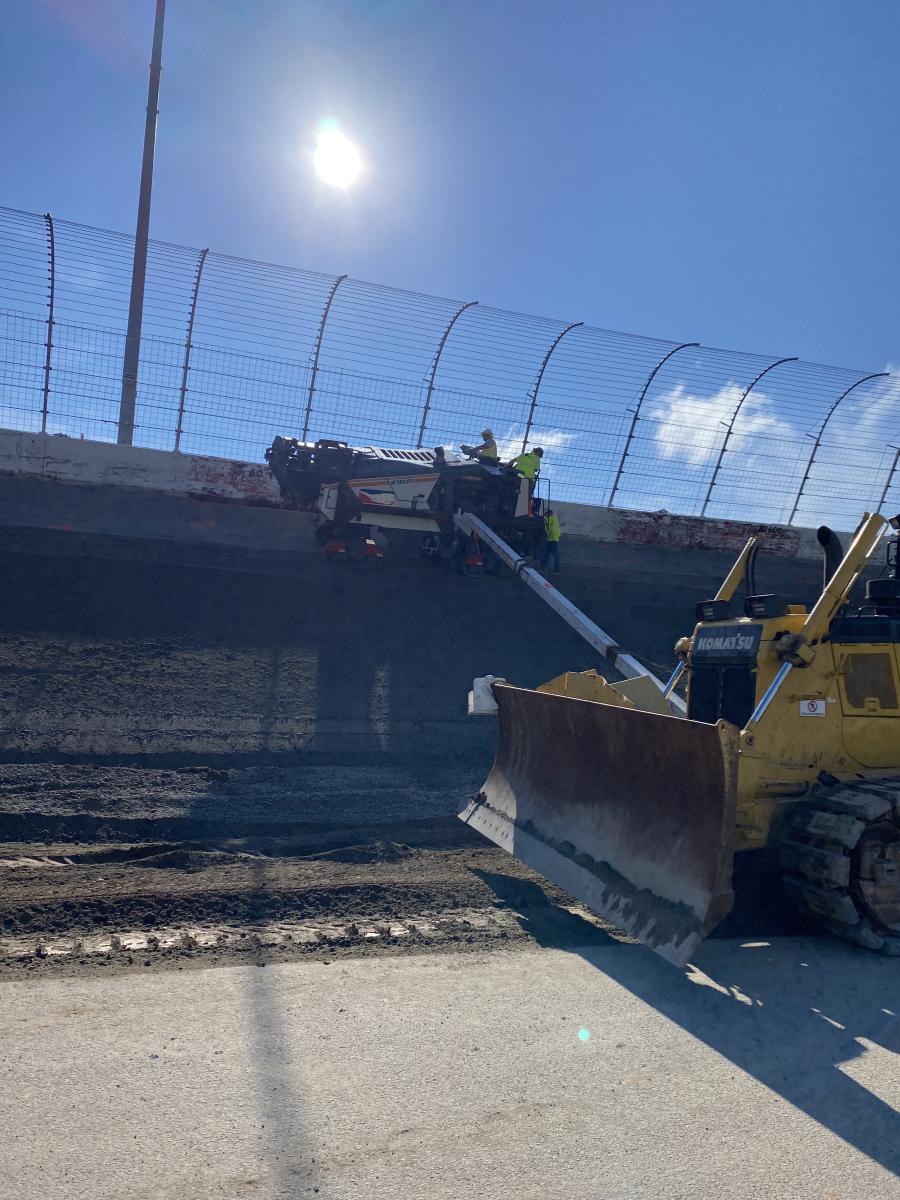 While the emphasis at the track is speed, speed and more speed, the emphasis on the rebuild was precision and a deliberate pace. While a normal paving machine might pave 3 mi. of flat road in a day, workers at the AMS were happy to get halfway around the banked area of the track in a day (approximately 750 tons of asphalt). The reason is that the banking of the track, which makes high-speed racing possible, makes paving work almost impossible. Vehicles of any type that are not traveling at high speeds are naturally pulled downhill by gravity. Workers on the track find it exhausting just standing on the embankment for more than a short time.

These problems are nothing new for John Rauer, division manager of Eurovia Atlantic Coast dba as Sunmount Paving. He has supervised the construction of 13 racetracks in his career, including the last paving at AMS. The excavation at the track began shortly after July 4. Rauer gathered his paving team of approximately 20 people to start their piece of the job around Labor Day and finished in early December.

"There's some engineering that went into the process, but much of it was trial and error," Rauer admitted. "We had to fabricate something new almost every week to make the process better or easier. Even with the paver anchored, the paver would slip sometimes. So, we had to make many adjustments."

After laying down a cement-treated layer at a depth of 6 in., the paving team laid down a 2-in. drainage layer, then built a final 2-in. lift of 9.5 mm granite stone. The mix was similar to a standard Superpave used on most Georgia interstates but tweaked with an 82-22 oil. The stone used was coarser than for most projects, enabling the tires to get more friction and grip the track better at high speeds.

ER Snell's asphalt plant produced the mix at its Stockbridge location, about 20 mi. from the speedway. Asphalt is composed of stone and liquid asphalt. For this project, track officials wanted a mixture that was stiffer than ordinary paving. 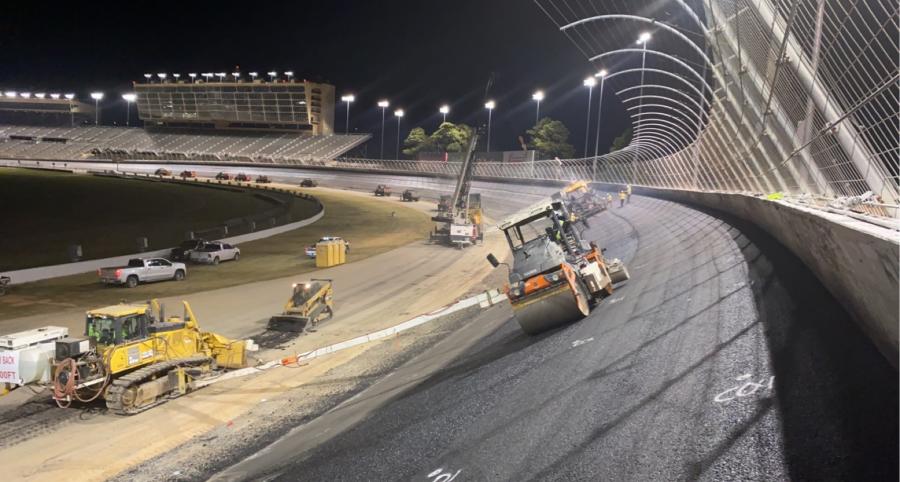 "The liquid asphalt is a product that is the glue that holds everything together," said Robbie Robinson, senior technical services manager of Associated Asphalt. "NASCAR cars have tires that create a lot of friction on the wearing surface. A stiffer mix is going to be more durable than a typical asphalt used on a highway."

Building a smooth road is important in racetrack paving. While a slight bump in the road is not a big deal when paving an interstate or a city street, bumps on a racetrack where cars are traveling over 150 mph can create major problems.

"We take smoothness seriously," said Rauer. "We have a special grinder that we built ourselves to take care of the occasional localized bump. Our people use the saw blades to grind out the bump."

The equipment used in the paving process was standard: a Vogele paver with a fixed screed, Hamm rollers, Komatsu bulldozers and a Link-Belt crane.

Drivers liked what they felt as they have hurtled around the new track in trial runs. Kurt Busch, who competes full time in the NASCAR Cup Series, has won four times at this racetrack. He was impressed by the new configuration.

"It was exciting to be in a different environment, but yet here at Atlanta Motor Speedway," said Busch. "It's completely changed with the banking and the fresh asphalt. The drive had a lot of excitement in anticipation of how the track would feel." 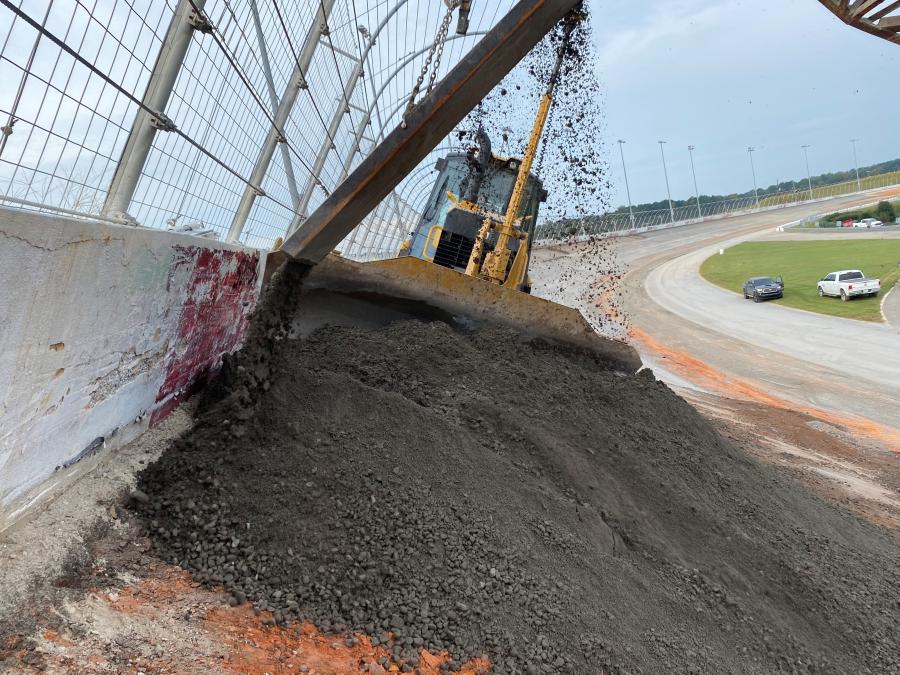 Busch and his competitors will test the track for real for the Folds of Honor Quik Trip 500 on March 20.

"Once we got out there in a group, the pace picked up by over a second having the cars draft together," said Busch of his trial run. "There's a lot of speed and it's amplified more than what we expected when we have cars drafting with each other."

By then, Rauer and the Sunmount paving team will be sitting in their easy chairs watching the race knowing that this new marvel did not come easily.

"The best days on projects like this are the first day and the last day," he joked. "After paving a racetrack with a new challenge every day, paving on normal flat ground almost feels boring. It's very satisfying, however, to watch the races and know that our team played such an important part in this process." CEG