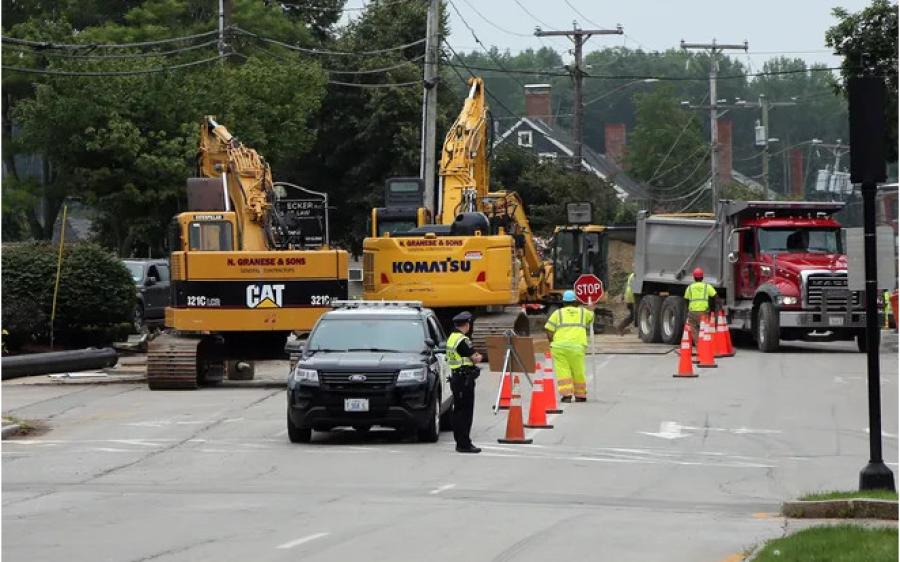 Work continues on Main Street in Dover, N.H., as old water main pipes are replaced with new ones. (Deb Cram/Fosters.com And Seacoastonline photo)

Downtown Dover, N.H., is the scene of two large construction projects this summer, the second of which will begin in early September. Both enterprises are designed to replace aging water mains in the town, but traffic congestion due to the work has caused headaches for drivers trying to navigate through the area.

The situation may not get much better until the two connected projects are fully paved in stages – the first slated to happen late this year, and the second in spring 2022.

After a competitive bid process, the Dover City Council in June selected N. Granese & Sons Inc. of Salem, Mass., as the contractor of both projects, according to the Daily Democrat, Dover's local newspaper.

A new water main has been installed along Washington and Main streets, from Henry Law Avenue east and north to Broadway. The city of Dover is testing the final piece of the water main before putting it into operation, while the contractor also is connecting properties to the new line already in operation and removing the temporary main where it is no longer needed.

In September, the contractor will return to mill out and replace the trench paving with a smoother coat that is even with the roadway. Next year, the streets above the new mains will receive full pavement overlays once the soils of the work areas have had a chance to settle over the winter.

The Daily Democrat reported that after the work gets under way in early September, once the Washington and Main project is finished.

Two sections of the Central Avenue North project are slated to be upgraded with new water lines. The oldest is a 133-year-old, 14-in. water main from Lowell Avenue to Abbey Sawyer Memorial Drive, a critical piece of the city's water system infrastructure. The other is an undersized 6-in. water main

from Glenwood Avenue to Lowell Avenue installed in 1927. The contractor will replace each main with 16-in. ductile iron pipes manufactured to last for the next 100 to 150 years.

Weather permitting, the work is anticipated to be substantially complete by mid to late December.

In preparation for the project, Dover Community Services members have been digging test pits and marking known underground infrastructure. This work also has created periodic backups on Central Avenue.

John Storer, the city agency's director, said he understands there will be "huge inconvenience" for residents and businesses, but stresses that the project is needed to replace critical infrastructure before it fails.