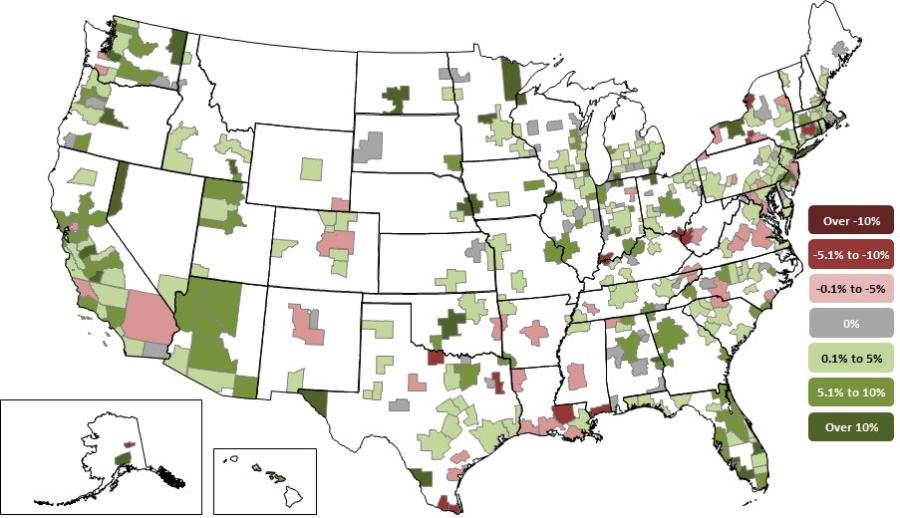 Construction employment grew in 255, or 71 percent, out of 358 metro areas between July 2018 and July 2019, declined in 56 and was unchanged in 47, according to a new analysis of federal employment data released Aug. 28 by the Associated General Contractors of America. Association officials said a newly released workforce survey they conducted with Autodesk showed the employment gains would likely have been even more widespread if firms could find more qualified workers to hire, and they urged federal officials to bolster career training programs.

"Demand for construction has not slackened in most metro areas," said Ken Simonson, the association's chief economist. "In fact, of the nearly 2,000 respondents to our survey, 91 percent said they expect their firm to hire hourly craft personnel in the next 12 months, either for expansion or replacement. But four out of five contractors reported having a hard time filling hourly craft positions.

"Worker shortages are pervasive across all regions and nearly all crafts," Simonson added. "The survey asked firms about their experience this year in filling 20 different types of hourly craft positions. For all but one of these trades, at least half the respondents said filling the position is more difficult than a year ago. Firms in all four regions — Northeast, Midwest, South and West — reported widespread difficulty filling craft positions."

One of the biggest challenges facing many construction firms is the lack of available, qualified workers to hire. The survey found that 45 percent of respondents give a rating of "poor" to the adequacy of the local pipeline for supplying craft personnel who are well trained or skilled.

Association officials said that part of the problem is that the nation's higher education system does not place career and technical education on an equal footing with traditional college education. For example, federal Pell grants cannot be used for construction-focused training programs offered by community and technical colleges. Stephen E. Sandherr, the association's chief executive officer, called on Congress and the administration to pass the bipartisan JOBS Act, which would remedy this Pell grant problem.

"It's high time to end the federal funding bias against career and technical education and provide students interested in vocational education with the same opportunities available to students attending four-year colleges," Sandherr said. "Leveling this playing field will help introduce more young adults to the many high-paying opportunities throughout the construction industry."