Construction Employment Increases In 44 States From January 2018 to 2019 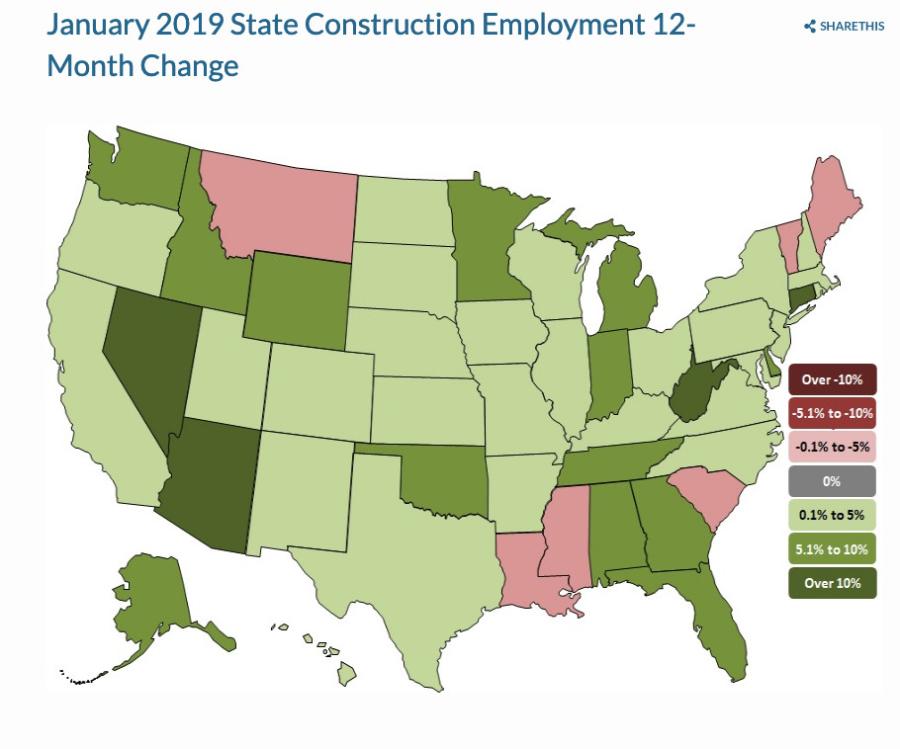 "Contractors began 2019 by adding employees in nearly all parts of the country," said chief economist Ken Simonson. "These figures are consistent with the optimism contractors expressed about workloads and hiring plans in our association's recent survey. But finding workers to execute those projects is likely to be an ongoing challenge."

Nearly four out of five construction firms expect to add employees in 2019, the economist said, based on the 2019 Construction Hiring and Business Outlook Survey the association conducted with Sage and released on Jan. 2. At the same time, 78 percent of the survey's 1,312 respondents said their firm was having a hard time filling positions, and two-thirds of the respondents reported they expect it will as hard or harder to hire workers in 2019.

Six states and the District of Columbia shed construction jobs over the latest 12 months. The largest decline occurred in South Carolina (minus 3,900 jobs, minus 3.8 percent), followed by Louisiana (minus 1,600 jobs, minus 1.1 percent) and Maine (minus 1,300 jobs, minus 4.5 percent). Vermont had the steepest percentage job loss over the 12-month period (minus 4.6 percent, minus 700 jobs), followed by Maine, South Carolina and Mississippi (minus 2.1 percent, minus 900 jobs).

Construction employment decreased from December to January in 15 states and was unchanged in Hawaii, Minnesota and D.C. Texas lost the largest number of construction jobs for the month (minus 4,800 jobs, minus 0.6 percent). The largest percentage losses of construction jobs — 1.1 percent — occurred in Rhode Island (minus 200 jobs) and Oklahoma (minus 900 jobs), followed by losses of 0.9 percent in Mississippi (minus 400 jobs) and Alabama (minus 800 jobs).

Association officials said that the widespread job increases may not be sustainable unless more potential workers have the chance to learn construction skills. They called on federal officials to double investments in career and technical education programs to expose more high school students to construction opportunities.

"Contractors continue to struggle to find enough qualified workers to hire in order to keep pace with demand for construction," said Stephen E. Sandherr, the association's chief executive officer. "Getting federal officials to boost investments in career and technical education will put more people to work in high-paying construction careers."