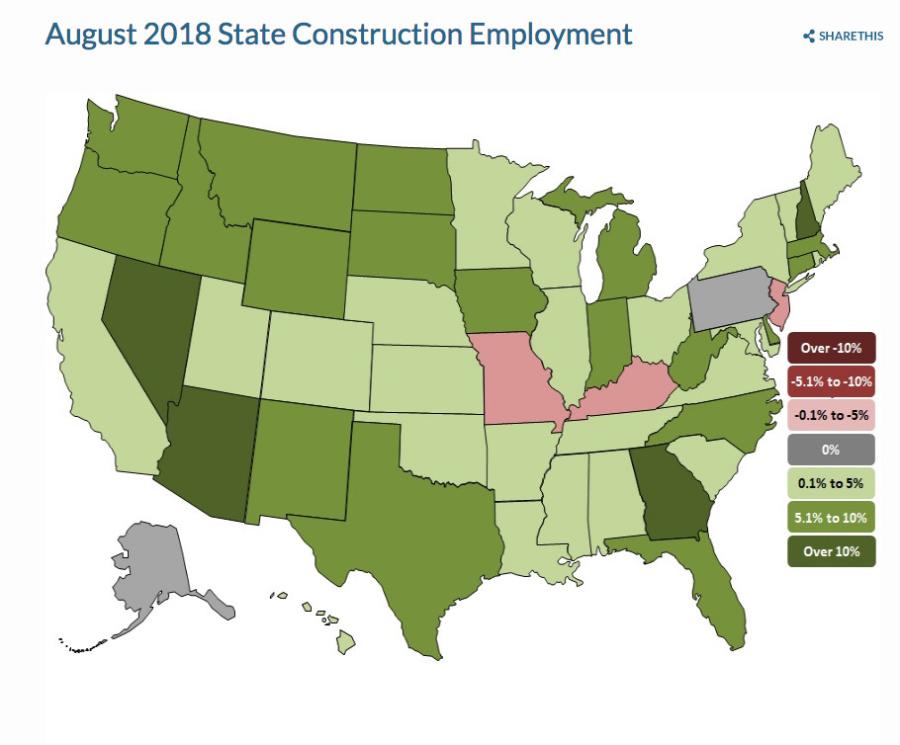 Forty-five states and the District of Columbia added construction jobs between August 2017 and August 2018, while 33 states added construction jobs between July and August, according to an analysis by the Associated General Contractors of America of Labor Department data released Sept. 21. Association officials welcomed the job gains but noted that the numbers would have been higher if contractors could only find more qualified workers to hire.

“Only three states experienced a decline in construction employment over the past year, the fewest number with a decrease since May 2015,” said chief economist Ken Simonson. “These results show that contractors still expect to have plenty of work in the months ahead. The question many in the industry are asking is whether they will be able to find enough workers to keep pace with demand.”

Only three states shed construction jobs between August 2017 and 2018, while construction employment was unchanged in Alaska and Pennsylvania. The largest and steepest percentage losses occurred in New Jersey (minus 6,600 jobs, minus 4.2 percent), followed by Kentucky (minus 2,600 jobs, minus 3.4 percent) and Missouri (minus 1,000 jobs, minus 0.8 percent).

From July to August, construction employment declined in 15 states and D.C. but was unchanged in Alaska and Delaware. Pennsylvania lost the most construction jobs (minus 1,900, minus 0.7 percent), followed by Kentucky (minus 1,400 jobs, minus 1.8 percent) and Illinois (minus 1,200 jobs, minus 0.5 percent). Kentucky lost the highest percentage of construction jobs in August, followed by Arkansas (minus 1.1 percent, minus 600 jobs), Pennsylvania and Maine (minus 0.7 percent, minus 200 jobs).

Association officials noted that a survey the group released in late August found that 80 percent of construction firms are having a hard time finding qualified workers to hire. As a result, the association is calling on federal officials to double funding for career and technical education within five years, enact immigration reform and expand apprenticeship and other job training opportunities.

“Just because construction firms are hiring some workers doesn't mean they are hiring as many as they need,” said Stephen E. Sandherr, the association's chief executive officer. “Getting federal officials to invest in career and technical training programs for construction will put even more people into high-paying construction careers.”