Construction Gets Going On $4.5B Underground Power Line From Quebec to NYC 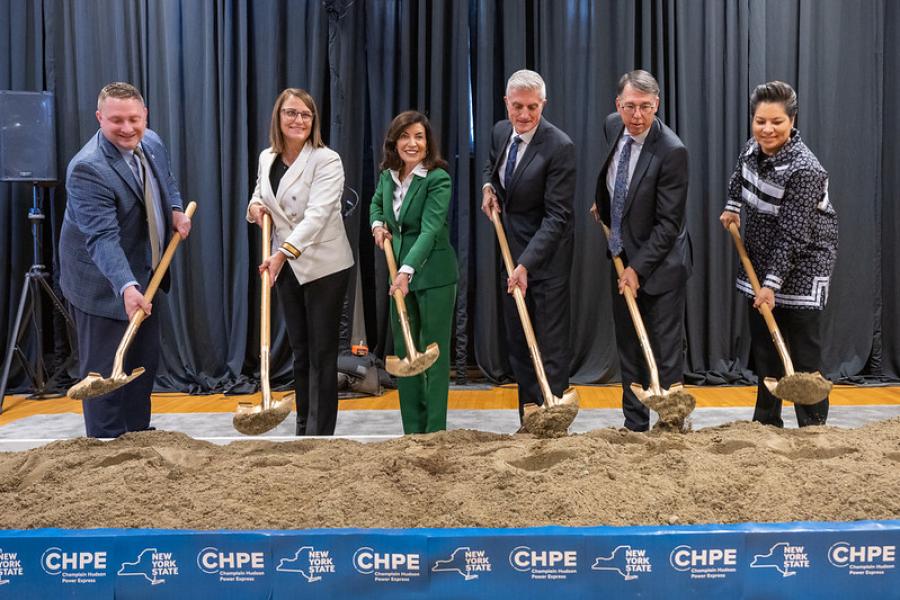 New York Gov. Kathy Hochul was in the Washington County village of Whitehall Nov. 30 to announce the start of construction on a 339-mi.-long underground transmission line that will bring clean power from Quebec's hydroelectric plants to New York City.

That is great news for New York, which, according to the Albany Times Union, has one of the most ambitious clean energy and climate change laws in the country, requiring the state's electric generation infrastructure to be emissions-free by 2040.

The $4.5 billion direct-current power line, known as the Champlain Hudson Power Express (CHPE), will send up to 1,250 megawatts of electricity to the New York City area. That is enough current to power about a million homes.

Construction is getting under way in Whitehall and will progress north and south at the same time, venturing through the Albany region at one point, mostly along railroad beds or underwater.

Unlike traditional high-voltage power lines across New York that use alternating current (AC) and are strung along metal towers, direct current (DC) power lines are often made small and buried underground, and they can only bring electricity to a single destination, the Times Union noted Dec. 1.

The project is being constructed by Albany-based Transmission Developers Inc. (TDI), which is planning a similar project in Vermont that also will import clean power from Hydro Quebec, the entity that oversees the Canadian province's hydroelectric dams.

"This green infrastructure project will bring billions of dollars in economic benefits to our state and will pave the way for cleaner air and a healthier future for all New Yorkers," Hochul said at the kickoff event.

Observers are hoping the CHPE project stays on schedule so that it can be completed by 2026.

Otherwise, residents and businesses in the New York City area could be facing the potential for future electricity shortages or reliability issues during the hot, summer months, according to New York Independent System Operator (NYISO), the North Greenbush entity that administers the state's high-voltage electrical grid.

Shortly before Hochul's visit to Whitehall, the NYISO released a new report on the reliability of the grid that warned a "significant delay" to the CHPE's readiness could pose problems for New York City's power grid by 2028 — especially if there are severe weather events, such as a long heat wave. Issues could develop soon, NYISO noted, depending on weather, economic and public policy factors.

"We see reliability margins narrowing to concerning levels as early as 2023," Zach Smith, NYISO's vice president of system and resource planning, said in a statement. "To meet policy goals and maintain reliability we need to use the power of markets to mitigate these risks as we bring new resources on the grid."

The Times Union reported that although New York currently has plenty of electricity to keep the state and its economy humming, New York is facing some challenges to that adequate supply — mostly of its own making.

The state's strict climate change law will force fossil fuel power plant owners to eventually shut down their facilities to encourage enough clean energy production from solar and wind farms, as well as hydroelectric dams, to make up the difference.

The problem worsened when former Gov. Andrew Cuomo forced the closure of the Indian Point nuclear power plant in Westchester County several years ago over worries a radiation leak was too much of a risk to the millions of residents in the New York City area. Indian Point produced 2,000 megawatts of emissions-free electricity, a substantial chunk of the peak electrical demand in the state, which can reach more than 30,000 megawatts on sizzling summer days.

But, in addition to the CHPE Quebec to New York line, another DC transmission line project involving the New York Power Authority called Clean Path NY also will bring renewable energy to the nation's largest city. It differs from the CHPE line in that it will be power generated in upstate New York instead of in Canada.

Together, Clean Path NY and the CHPE are expected to provide New York City with one-third of all its electrical needs once they are both complete.