Construction Gets Under Way on Church's $8M Home

As construction gets under way on an $8 million structure in Valdosta, Ga., Pastor David Rogers can’t help but recall Crosspointe Church’s modest beginnings. 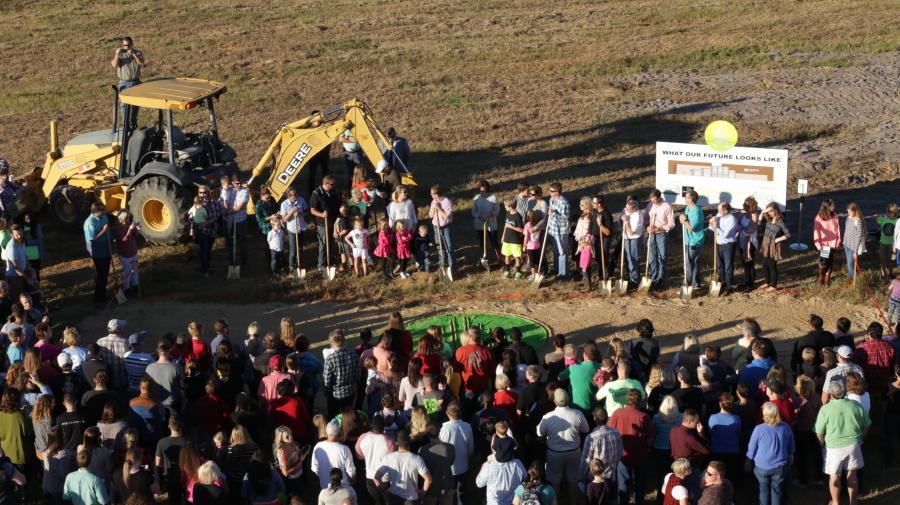 As construction gets under way on an $8 million structure in Valdosta, Ga., Pastor David Rogers can't help but recall Crosspointe Church's modest beginnings. When 13 adults and four children gathered in his living room for services in September 2005, it marked the beginning of the group's search for a permanent home.

“By February 2006, we had moved into a warehouse we transformed to a worship center and grew to about 350,” Rogers said. “From there, we acquired an old Winn-Dixie shopping center and transformed that space into a 1,000 seat worship center, and other multifunctional rooms, for family ministry.”

Currently, the church is renting an older building, with the lease set to expire in less than two years. The space is in constant need of repairs, as well.

“Although it has served its purpose, we have also outgrown it,” said Rogers. “To be good stewards of what God has given us, we feel that we needed to make plans to move into a permanent building that we would own instead of renting, which is newer and more efficient, and that offers us the space we need to grow.”

Being built off Highway 41 North on Kings Way, the building will include a sanctuary, 400-seat auditorium, classrooms and office space. Work on the new structure began in January 2016, with Studio 8 Design serving as project architect, and Cauthan Construction Company Inc. overseeing construction.

CrossPointe holds two services on Sunday morning and has launched another campus in Quitman, Ga. Reaction to the new building has been extremely positive, according to Rogers.

“I guess you could expect that from the staff and the church, but what has been truly incredible is seeing our community get real excited about this project,” he said. “It has been amazing.”

The church will be moving just a few miles away to an area that is quickly growing, just north of its current location.

“Our vision is to be one church with multiple locations. One huge advantage is getting to take the church where the people live, work and play. But also, it's a very cost-effective way of growing the church.”

Rogers said, “The new sanctuary will probably seat around 1,500 and will primarily be used as our worship center and banquet room. The rest of the facility will be used for children, youth and adult ministries.”

“I believe we are living in a very casual culture these days. Contemporary is in our DNA. But we take very seriously discipleship and worship. Our goal in creating this space is to allow people to feel welcome and safe, but also feel real and authentic. Authenticity is hugely important to us.”

CrossPointe Church held a groundbreaking ceremony for its new sanctuary in October 2015. The project is being funded by gifts from church members and budgeted resources converted from renting to owning.

Currently, site work is taking place. Bill Hurley, superintendent/project manager of Cauthan Construction, said, “One of the biggest challenges here on site is the time of year starting the job, which is the rainy season. It's rained pretty much every week, and the wet and cold weather can hold you back. On top of that, we have had to do numerous proctors on dirt, due to several types of soils on this job.

“We've just completed 60 percent of the storm pipe installation to the large pond, located in the northeast corner of the property. It will be ten feet deep and will maintain a five foot level even in the dry part of the year.

The pond will help control flooding, in addition to adding to the aesthetics of the project.

“The pond will actually be stocked, so that church members will have a place to catch and release fish,” Hurley said. “Behind the site is a bunch of wetlands, which we have to keep in mind. You have to have a retention pond to gather water and move it off in a 24-hour period. Before, you really didn't have to have a retention pond, but we've covered up our planet with asphalt and concrete, and when this happens, rain runs off. So engineers have created ponds that gather water that collects on site, and the water can slowly be released into storm drain systems and in rivers so its not a massive situation and you don't have floods.”

Hurley said prior to work beginning, officials had to check the soil to make certain it was adequate for the foundation and parking areas.

“Unsuitable soil can't be used under a building or when dealing with asphalt. You have to have the right compaction. If the material's not good enough, you have to haul it off.

“We are moving dirt to the different parts of the job site, to get ready for the underground utilities. In a few more weeks we will be ready to start laying out the building slab. We have moved approximately 55 cubic yards of material, including topsoil, which is stockpiled on site also. We have been able to use dirt/material on site to complete the job.”

Regarding underground utilities, crews must bore underneath the roads and tie in water and sewer.

“This involves digging a pit. It can be a little extensive and will take several weeks. We're still working on getting all the site to grade, so that you have the right depths when they come in to do the work,” Hurley said.

“I am very proud to be a part of this process,” said Hurley. “If you build the church right and put your heart into it, you don't have any problems returning once it's complete. Seeing your handiwork and craftsmanship can be very rewarding. You just have to take things one step at a time, and surround yourself with good subcontractors.”

Project architect Bruce Smith, AIA, Studio 8 Design, said, “The first impression after meeting the staff was that they wanted a more modern type of building for a more modern style church service. We wanted to provide a facility that allows the staff to meet the needs of the youth, as well as the typical expectations of the older church members.”

Smith said having strong security in place for the children's drop-off and pick-up area was a priority, along with staying within the project's spending guidelines.

“The budget is very tight for the amount of building needed, so we had to be very sensitive to project costs.”

Creating a casual atmosphere was also a challenge for the creative team.

“Unfortunately, it is difficult to capture what is traditionally considered a feel of reverence and provide a modern contemporary look. The younger church members are not as concerned about the traditional feel of a facility. In this case, the more modern, non-traditional look was the best solution for the church's needs,” Smith said.

The basic layout is one large single-story sanctuary building, a two story educational building, and a common lobby/hallway building between the two buildings to allow good circulation, as well as fellowship among the congregation when transitioning to different spaces. The main exterior building materials are metal roof panels, metal wall panels and some EIFS or stucco type finishes as accents on the smaller building elements to contrast the larger metal panel buildings.

Because the budget was limited, incorporating certain sustainable elements was not an option. However, the firm worked to provide effective design decisions regarding solar gain and building orientation, which did not have a significant impact on the budget. Having the structure complement nearby buildings was also not an issue.

“This did not have a big impact on the design. The surrounding area is a wide mixture and variety of buildings, so there were a lot of architectural languages that could be employed,” said Smith.

“I would hope that a visitor feels the excitement from the congregation, as well as from the new facility. I experienced this in their old facility, simply because of the approach the church uses in their ministries. I was used to more traditional services, but was very impressed with the non-traditional services provided. The new facility can only make the experience even better.”