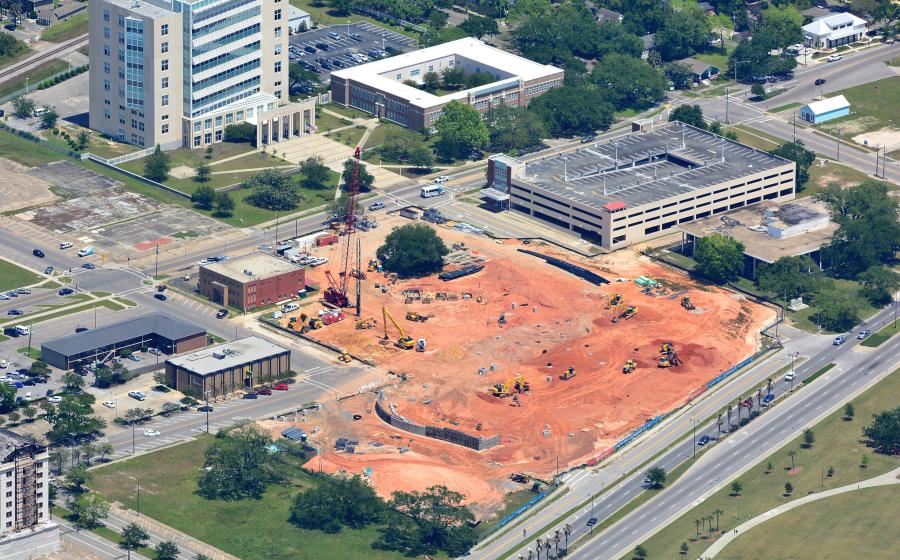 The aquarium property consists of multiple parcels of land acquired by the city of Gulfport specifically for construction of the new aquarium campus. One piece of property was occupied by a church, while another featured a bar/restaurant. An old Masonic Lodge still sits on the northwest corner of the land, and is set to be demolished at the end of the project. It currently serves as a construction office. (Roy Anderson Corp photo)

As the future home to alligators, river otters, river fish, dolphins, stingrays and shorebirds, the world-class $93 million Mississippi Aquarium will serve as a major tourist attraction when it opens in Gulfport in early 2020. Containing one million gallons of both salt and fresh water and sitting on 5.8 acres, the aquarium will feature more than 80,000 sq. ft. of exhibits, and was designed to create an appreciation for the coastal environment through interactive learning programs.

Kimmel noted that the highly anticipated structure will serve many purposes.

“Mississippi Aquarium's impact will be transforming by attracting visitors, being a catalyst for private sector development and job growth, promoting and enhancing marine research and creating educational awareness. Our community leaders see Mississippi Aquarium as the lynchpin to other projects being developed in downtown Gulfport.

“Mississippi Aquarium will be an iconic landmark symbolizing the resilience of the people of the Mississippi Gulf Coast and the commitment of Gulfport's City leaders to its continued growth and development.”

Those involved in the planning believe the new aquarium will elevate Gulfport, the Mississippi Gulf Coast and the state to a family-friendly premier tourism destination.

The acrylic panels for Mississippi Aquarium, the windows to the habitats, recently arrived from overseas. They are currently being stored at the Port of Gulfport, awaiting installation.

With so many features, one of the most anticipated additions, according to Kimmel, will be the tunnel.

“This is a clear acrylic tube our visitors will walk through while viewing marine mammals. I'm also excited about our large viewing window, which is approximately 32 by 25 ft. and 16 inches thick, and weighing more than 40 tons. It will allow our visitors to see the complete strata of the gulf, portraying animals from the gulf and beyond.

“Mississippi Aquarium's 12 habitats are designed in a campus environment where visitors will be surrounded by both indoor and outdoor habitats. The aquarium's landscape will contain over 50 different species of plants and represent native plant species from all seven physiographic regions of Mississippi.”

The aquarium's exterior habitats will be 1,600 ft. long, the equivalent of four-and-a-half football fields. The landscape will be a natural food source for birds and butterflies. In addition, every drop of water will be filtered 16 times per day.

Hundreds of jobs are being created during construction, with more than 100 aquarium employees on staff once work is complete. With an average 487,000 visitors expected each year, the facility will reportedly be self-sustaining, and operate at no cost to the taxpayer, upon opening. Kimmel said it's extremely rewarding to see construction under way, knowing that crews are making steady progress.

“Every day, I see all of our hard work get a little bit closer to reality,” he said.

Kimmel added there is still much to be done before the ribbon can be cut.

“Constructing the aquarium is only one piece of bringing it to life. Right now, our staff is finalizing our animal acquisition plans and writing all of the policies and procedures necessary not only to operate the aquarium, but to do so in accordance with the various accreditations we will be seeking from the Association of Zoos and Aquariums, Alliance of Marine Mammal Parks and Aquariums, International Marine Animal Trainers' Association and America Humane.”

“This is very specialized, including many details and methods not used on normal, general construction. Quality is of the utmost importance, since some structures will be retaining hundreds of thousands of gallons of water. The life-support systems are critical, as well, since these are the systems that will be keeping the aquatic life alive during operation.”

The aquarium property consists of multiple parcels of land acquired by the city of Gulfport specifically for construction of the new aquarium campus. One piece of property was occupied by a church, while another featured a bar/restaurant. An old Masonic Lodge still sits on the northwest corner of the land, and is set to be demolished at the end of the project. It currently serves as a construction office.

Early work involved building the waterfront property's elevation from 18 to 25 ft. As part of an early release package, a separate contractor mobilized and completed some site utility and storm drainage infrastructure.

“They also brought in thousands of yards of clay to surcharge the site, in preparation for the loads/weights of the new construction,” said Knesal. “After settlement was achieved and the ground was stable, the same contractor removed some of the dirt that was brought in to get the top of the building pads to 25-feet elevation. We began construction from that point.”

So far, weather has not been much of a factor.

According to Knesal, finishing the main exhibit building's structure will be a major milestone.

“The entire structure is cast-in-place concrete. Once that is complete, it will allow many more trades to begin work in this main building. Permanent power is always a big milestone, as well, and is set to occur in spring 2019.”

According to Knesal, one of the construction challenges involves the custom transparent tunnel surrounded by water and a large viewing window.

“The tunnel is supported by a cast-in-place ledge that it rests on. There are also massive steel and concrete supports on the inside floor and above the top of the tunnel to keep it from floating up to the top of the tank, when the tank is filled with water. The cast-in-place walls must be completed first, then the cast-in-place ledge will be completed. Then, the acrylic tunnel will be brought in and set on the ledges with a crane through the roof of the main building.”

Knesal noted that crews cannot complete the roof until the acrylic is all set.

“Then we have to build a cast-in-place/steel ledge above the tunnel to keep it from floating up. Lastly, two 3,000-pound plates must be brought in and set at each end of the tunnel and bolted to the floor to keep the bottom from floating up and 'pancaking' against the top of the tunnel. Engineering and installation of these tunnel supports has probably been the most difficult single item we have experienced yet on the project.”

A lot of grading will be performed at the end of the project.

“There are so many elevation changes throughout the property that grading will be key to make sure the site drains like it should, and doesn't affect the animals,” said Knesal, adding, “at the end of the day, we have just under 1,000 yards of dirt to actually remove from the project. This is due to all of the dirt we are displacing when digging foundations and deep exhibit pools.”

As for some of the main materials being utilized, “There's a lot of concrete being used for this project, approximately 8,000 yards. The smaller buildings are using concrete masonry units [CMU], structural steel, steel joists and decking and metal studs for their structures. The exteriors of the buildings are either metal panels or stucco. Interiors will consist of metal stud framing and drywall with wall tile or paint finishes on the walls. Floor finishes include VCT, carpet, sealed concrete, polished concrete, hard tile, and fluid-applied flooring.”

Knesal said attention to detail is critical during construction.

“Quality has been a very important part of the work. When dealing with water retaining structures that support actual life, everything must be perfect, or it puts the lives of the animals in danger. A lot of additional time has been spent making sure all components are installed as the construction documents call them to be installed.

“Many hours are spent on inspections, coordination meetings and calls, etc. to ensure construction is not only per plans and specs, but also as the ownership group requires it to be, since they will be operating the facility after we leave and will ultimately be responsible for the lives of the animals. The ownership team provides a lot of knowledge on how some things need to be installed that may not be reflected in the actual construction documents, which helps our team with the end goal of turning over an aquarium facility that operates exactly as the owner needs it to.”

A unique item to be installed at the main entry of the property consists of three sail icons that will be the trademark image of the new facility.

“These sails will be built in descending height, with the tallest standing approximately 65-feet tall, which is 90 feet above sea level, since these will sit at elevation 25 feet. It was very important to the ownership team and the mayor of the city of Gulfport, to create a structure that will stand as the defining symbol of the Mississippi Aquarium for many years to come. These sail icons will have their own deep-pile foundations, with a very large cast-in-place pile cap. They will sit in a pool of water as guests enter the property, and will look like sailboat sails full of wind.”

As crews make progress each day, momentum continues to build.

“Locally to the Mississippi Gulf Coast and statewide, people are asking daily, 'How soon will it be opening?'” said Kimmel. “The community is extremely supportive. Not only are they excited about the aquarium, but how it's already impacting the economic development in Gulfport.”