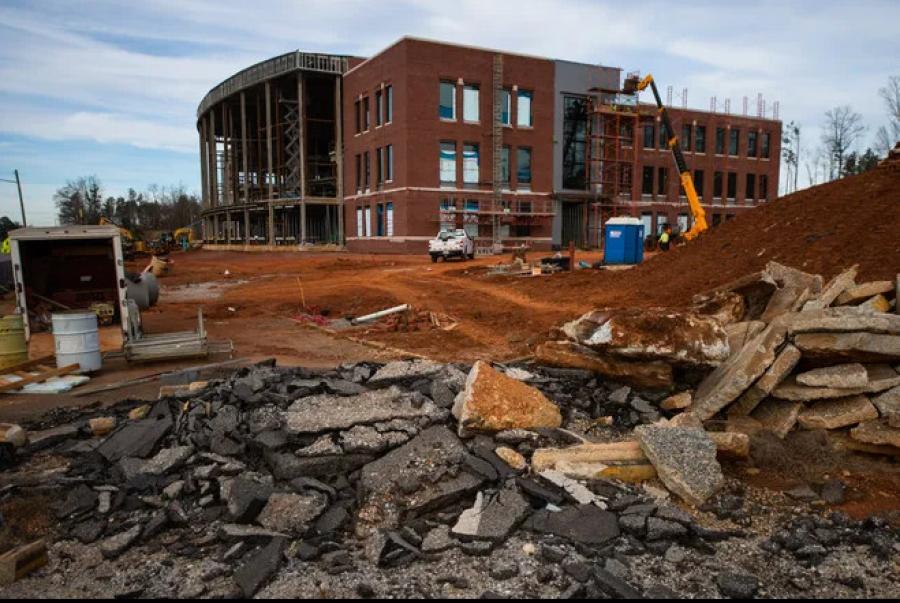 Merrill Hall, a Jacksonville State University institution for close to 50 years, was destroyed March 19, 2018, by an EF-3 tornado that ravaged the JSU campus. Construction on its replacement started a year ago. (Matt Reynolds/JSU photo)

Construction on Jacksonville State University's new School of Business and Industry building has passed the halfway point, according to a news release from the university, with an anticipated completion date of August of this year.

The college is located in Jacksonville, Ala.

Merrill Hall, a campus institution for close to 50 years, was destroyed March 19, 2018, by an EF3 tornado that ravaged the JSU campus. Construction on its replacement started a year ago.

"We're very excited about moving into the new building this summer," said Steven McClung, dean of the School of Business and Industry. "We believe it will give our students access to the latest technology and facilities, providing an education that will make them extremely competitive in their fields. The facility will benefit all of our students in applied engineering, business and communication."

The new facility also will carry the Merrill Hall name, in honor of former Rep. Hugh D. Merrill Jr. of Anniston. Merrill, who died in 1997, was instrumental in JSU's evolution from a teachers' college to a state college and ultimately university status. He was president pro tempore of the school's board of trustees from 1968 to 1980.

Merrill Hall's second incarnation is located on the same site as the first and, according to the news release, was designed as a modern version of its predecessor.

Its 105,000 sq. ft. of space will include a 300-seat auditorium, a three-story atrium and common space, 12 academic classrooms, a finance lab, an in-house Career Development Center, job interview rooms, team working areas for group projects, faculty and staff offices, and a dean's suite.

A coffee shop on the first floor, which will provide internships and job opportunities for students, also is envisioned.

Doster Construction of Birmingham is the general contractor, with Turner Construction of Huntsville serving as the construction manager. In addition, Brailsford & Dunlavey of Atlanta is the program manager/owner's representative, the architect of record is Birmingham's Davis Architects, while Robert A.M. Stern Architects of New York is the designer.

Among the key subcontractors are MSE Building Co. of Birmingham, performing the concrete work; and Daniel Iron of Birmingham, the company erecting the steel.