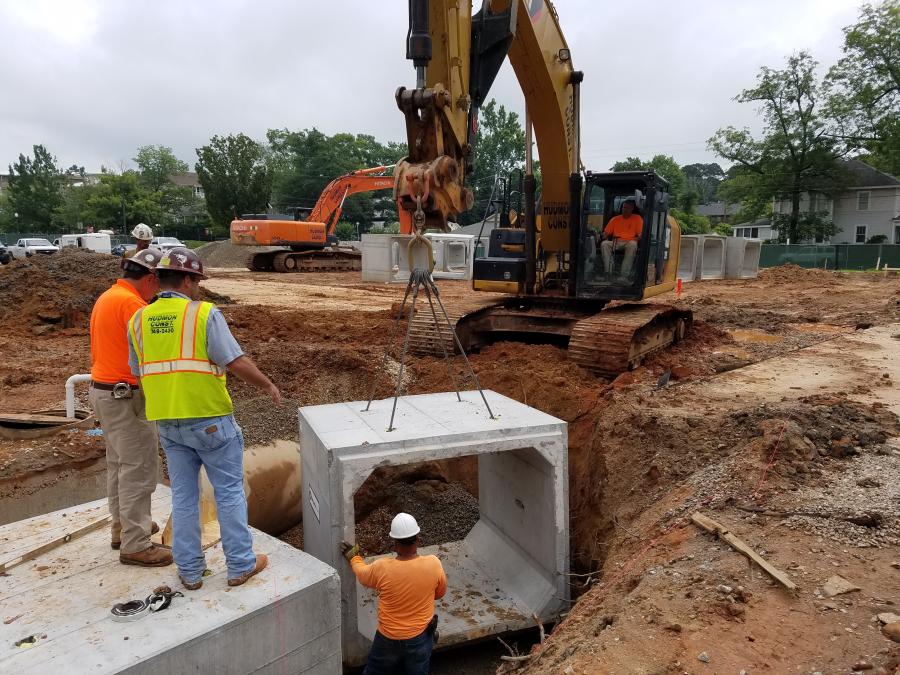 Main equipment used on the job will include track excavators, loaders, truck cranes, scaffolding, scissor lifts, a boom hoist and other machines standard for this type construction. (City of Auburn photo)

Considered the most expensive single building project in the city's history, a $30 million public safety complex in Auburn, Ala., will serve a growing number of residents when it opens in late 2019. The state-of-the-art structure replaces a cramped and outdated facility that's outgrown its usefulness.

“There will be new, much improved double occupancy bedrooms in lieu of one large room at the old station. There will be a modern fitness facility that will have various pieces of equipment, and a larger room with showers in both police and fire. Fire will have a large day room with a commercial-style kitchen. We have built in expansion space for future growth in many areas of the building. There will be a firearms training room in the police area of the building.”

The project didn't happen overnight. James said discussions to construct a new facility have been ongoing for more than three years.

“The project started out as a remodel of the police building and public safety administration, to police remodel and addition, to new police building, to a new complex to house the fire division, 911, court, city council and administration. This involved meetings and input from most of the departments at the city of Auburn. It was truly a collaborative effort that generated many ideas and, most important, headed off potential problems while still in the design stage.”

When the new facility is complete, the current building will be torn down and turned into a large parking lot. James noted that now is the right time to perform the work, based on the age of the buildings.

“One is over 40 years old, and the other is over 50. Both have exceeded their useful life. Also, the police division has outgrown the current facility, and is in need of more space.” 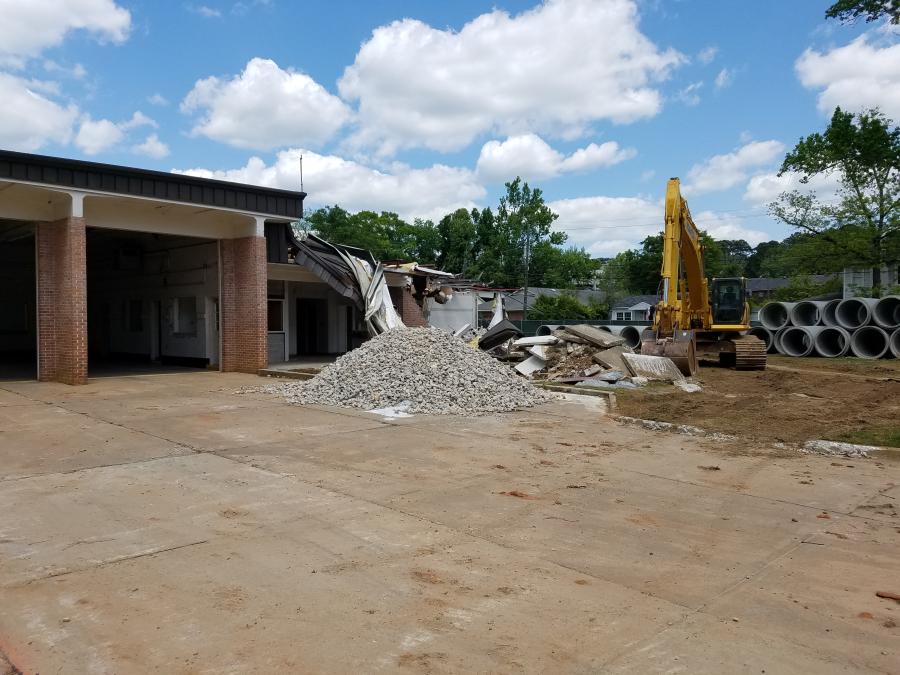 Work on the project began earlier this year, with the demolition of Auburn Fire Station Number 1. The site was previously used as a parking lot and fire station. Construction is funded through a bond issuance. James said the work comes not a moment too soon.

“Everyone is excited to have a new facility that will meet their needs for the next 40 to 50 years. Demolition is exciting, but we are all looking forward to the structure coming out of the ground.”

James said sustainability played a role in building the project, to a certain extent.

“Both buildings had old, inefficient HVAC and lighting, and the new building will be a much needed improvement that will reduce utility costs. There will be systems integration that will monitor many of the building components.”

The new complex also will serve as a model for other construction endeavors.

“This collaborative effort will be utilized for future projects, as we feel this will reduce change orders, because so many people from various departments were involved in the design phase. This included staff from building and fire inspections to ensure code compliance.”

Auburn Mayor Bill Ham was among the officials who turned out for the May 2018 groundbreaking, which also featured City Manager Jim Buston, members of the Auburn City Council, public safety administrators and Randy Hall, president of general contractor Batson-Cook. 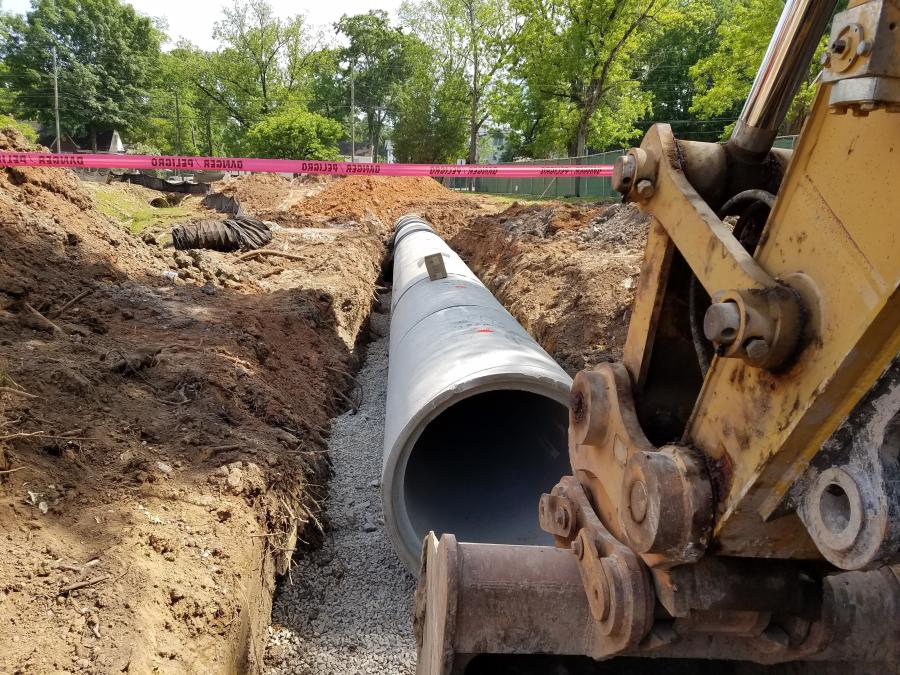 The asbestos abatement took four days for the door and window frame mastic and the floor tile removal. Demolition of the roof systems took about two weeks, with tear down of the building structure completed in nine days. There have been some delays due to rain, but nothing significant.

Key tasks yet to be carried out include installation of geo piers and actual construction of the building. The initial subsurface investigation noted poor soils, and recommended the use of geo piers; therefore, excavation of the site will be kept to a minimum. Roughly 2,000 cu. yd. of dirt/material will be moved on the project.

Main equipment used on the job will include track excavators loaders, truck cranes, scaffolding, scissor lifts, a boom hoist and other machines standard for this type construction. An estimated 463 tons of structural steel is required to build the facility and will be erected with the use of a crane. In addition, masonry blocks, cast stone, ductile iron pipe, PVC pipe, electrical wiring and concrete are required to complete the project. The most time-consuming part of the job will involve masonry work, as the exterior of the building is brick and cast stone structural steel, including a great deal of detail.

The safety of workers and the public is among the construction team's priorities. The site is completely enclosed with a 6-ft. fence. The fire department has been relocated to another location, with the other departments outside the construction fence.

The impact on motorists will be minimal. There will be resurfacing of one street in conjunction with the project, and one lane of traffic will be open at all times.

According to Nick Vansyoc, architect with Seay Seay & Litchfield, the goal for the new public safety complex focused on meeting the specific needs of the client.

“At the outset, we held collaborative visioning sessions and conducted user interviews to establish the city's vision for the project. Ultimately, the city of Auburn and the public safety department will inhabit the building. Therefore, we encouraged participation from each department with the goal of total buy-in from everyone involved.

“The project has been incredibly complex, with multiple inherent challenges. From overlapping utility lines and existing structures on the site, to coordinating the integrated, smart controls for the building, all aspects of the facility are layered with complexity to meet the needs of the users.”

Vansyoc said security, maintenance, efficiency and technology all had to be coordinated to create a quality facility that will function well for decades. As a result, the finished product has been described as dense on more than one occasion, referencing the abundance of connected parts for this cohesive whole.

“The architectural influence of the building was derived from several sources. The city wanted to use the existing city hall as the precedent for the design. This traditional Colonial Revival style was blended with more contemporary elements, such as large storefront windows and metal awnings. Overall, the design prioritized the three facades that face the public ways.

“We wanted each to say something about the occupants, while keeping a consistent motif. For example, the north façade is the judicial entrance, and as such, we wanted it to communicate a sense of grandeur. The utilization of traditional forms such as the colonnade are familiar, and they are associated with a courthouse. By contrast, we incorporated traditional fire station details such as the tower along the south façade forming the fire department.”

Vansyoc said concern for the environment played an important role in the design process.

“While certification was not a requirement, we used several strategies to help the building be efficient and environmentally friendly. We specified energy efficient quality electrical and mechanical systems, including LED lighting throughout, VRF heating and cooling and outdoor air energy recovery. We've specified materials with low VOC contents and required recycled materials where possible.

“Also, the landscaping is based on plant species that will thrive with little maintenance and have included permeable paving and bioretention to limit rainwater runoff into the storm system. These items highlight just a few of the inherent sustainable strategies.”

As for what employees and visitors should take away from the complex once construction is complete, “Our hope is the care and attention to detail by everyone involved is evident,” said Vansyoc. “The entire team was very cognizant of the purpose of this complex, which is to serve the citizens of Auburn, Ala. It will be part of the city's fabric for years to come.”