Construction Set to Begin Next Year on Medical Campus 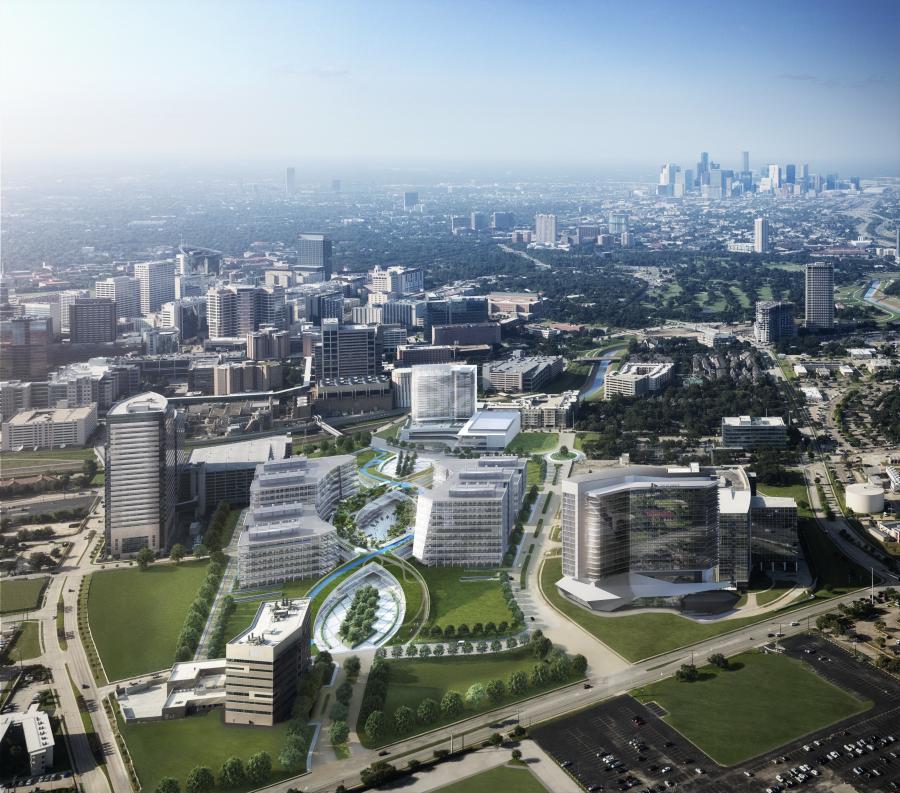 The groundbreaking project will generate a $5.2 billion stimulus to Texas and create 30,000 new jobs, according to a third-party economic impact study.

Work is set to begin in 2019 on a medical center founding institutions say will transform Houston into an international hub for biomedical research.

Dubbed the TMC3 — the 3 represents the branding of Houston as the “third coast” for life sciences — the new research campus is a collaboration between Texas Medical Center (TMC), Baylor College of Medicine, Texas A&M University Health Science Center, The University of Texas Health Science Center at Houston (UTHealth) and The University of Texas MD Anderson Cancer Center. The institutions announced plans for the campus earlier this spring, with a completion date of 2022.

The project will include more than 1.5 million sq. ft. and bring together leading researchers with a host of top-tier expertise from the private sector, according to a press release about the project. It marks the first time the founding institutions have built and shared space on a major scale in the Texas Medical Center.

“The TMC3 campus will establish Houston as the Third Coast for life sciences, attracting the best scientific minds from around the globe,” said William F. McKeon, Texas Medical Center president and CEO. “With researchers working hand-in-hand alongside industry titans on this new campus, Texas Medical Center as a whole will further advance its position as a preeminent global player in life sciences.”

The groundbreaking project will generate a $5.2 billion stimulus to Texas and create 30,000 new jobs, according to a third-party economic impact study. Researchers will pioneer advancements in therapeutics, medical devices, regenerative medicine, genomics and data science, among other areas.

“The new 30-acre research campus will provide our top medical minds with the resources to remain at the forefront of the health care industry,” said Gov. Greg Abbott. “This cutting-edge facility will not only generate thousands of jobs, but it will solidify Texas' position as an international leader in biomedical research. I thank the Texas Medical Center, UTHealth, UT MD Anderson, Texas A&M University and Baylor College of Medicine for being a part of this transformative project, and for their continued commitment to changing the world through advancements in health care.”

The centerpiece of the TMC3 campus is designed to resemble the indelible double helix shape of a DNA strand. It will be a multi-story building spanning nearly the entire length of the 30-acre complex. The shared facility will include core laboratories, restaurants, retail and commercial space.

“TMC3 will move Houston much farther into the forefront as a global hub for biomedical research, leading to more innovation in this great city that has repeatedly remade itself as a global leader for science and innovation,” Mayor Sylvester Turner said. “More than ever, people who chart the course for the future will want to work, live and play in Houston.”

The crown jewel of the facility will be an elevated park designed by famed High Line landscape architect James Corner. The rooftop park — which will be open to the public — will soar 60 ft. above the campus, offer sweeping views of downtown Houston, and feature gardens, walking and running trails. The new campus city center also will boast the TMC Hotel and Conference Center, which will be a destination for leading experts to convene.

“We want to drive collaboration, and we know that happens when top researchers innovate side-by-side. Breakthroughs do not just happen in the laboratory,” McKeon said, “They also take place over coffee, on group runs, or during chance encounters with colleagues. The TMC3 campus will foster unparalleled opportunity for new discoveries on a daily basis.”

With a campus of more than 50 million sq. ft., Texas Medical Center (TMC) is the largest medical city in the world. TMC nurtures cross-institutional collaboration among its member institutions and the 110,000 employees who care for over 10 million patients annually. Baylor College of Medicine in Houston is recognized as a premier academic health sciences center and is known for excellence in education, research and patient care.

It is the only private medical school in the greater southwest and is ranked 16th among medical schools for research and 5th for primary care by U.S. News & World Report. The Texas A&M University System is one of the largest systems of higher education in the nation, with a budget of $4.7 billion. Through a statewide network of 11 universities and seven state agencies, the Texas A&M system educates more than 152,000 students and makes more than 22 million additional educational contacts through service and outreach programs each year. The University of Texas Health Science Center at Houston (UTHealth) was established in 1972 by The University of Texas System Board of Regents. It is Houston's Health University and Texas' resource for health care education, innovation, scientific discovery and excellence in patient care. The University of Texas MD Anderson Cancer Center in Houston ranks as one of the world's most respected centers focused on cancer patient care, research, education and prevention. The institution's sole mission is to end cancer for patients and their families around the world. MD Anderson is one of only 49 comprehensive cancer centers designated by the National Cancer Institute (NCI) and is ranked No.1 for cancer care in U.S. News & World Report's “Best Hospitals” survey. It has ranked as one of the nation's top two hospitals for cancer care since the survey began in 1990 and has ranked first 13 times in the last 16 years.