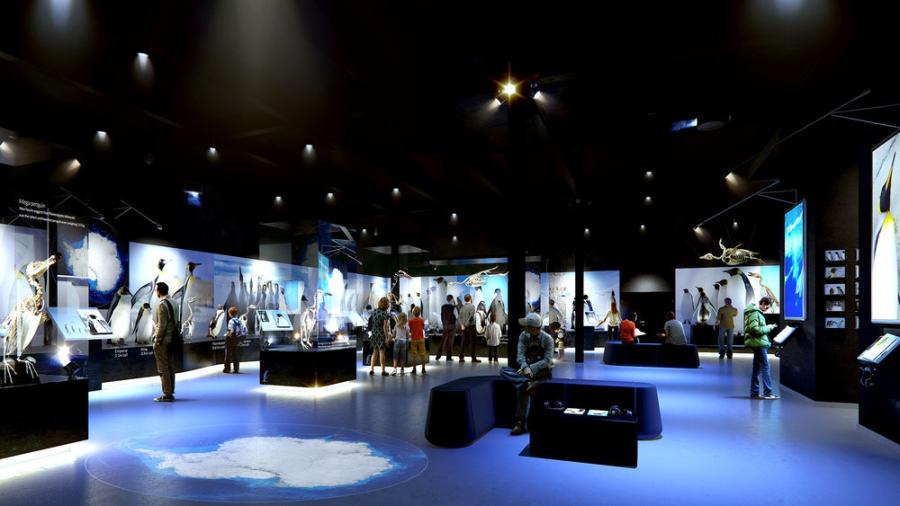 Science and natural history will have a much larger space for both permanent and temporary installations in the New Bruce. (Newbruce.org photo)

Greenwich, Conn.'s, Bruce Museum has scheduled an Oct. 8 groundbreaking ceremony for the beginning of construction on a three-story, 43,000-sq.-ft. addition.

Following the recent success of its ongoing, community-wide fundraising effort, leaders of the "Campaign for the New Bruce" announced Sept. 29 that construction will begin in October on the centerpiece of the Bruce Museum's transformative renovation and expansion project that will more than double the size of the museum, adding new exhibition galleries for art and science.

The "New Bruce", which is slated to be completed by the fall of 2022, also will feature the William L. Richter Art Wing for changing art exhibitions and the museum's permanent art collection, along with a 250-seat auditorium, a restaurant, new education and community spaces, and increased capacity for the museum's gift store and storage space.

The new building also will be home to the Bruce Museum's Steven & Alexandra Cohen Education Wing and, for the first time, significant space to show the museum's permanent art collection in four new galleries.

The entire ground floor of the new addition will be free and open to the public during museum operating hours and available for special-event use by local community groups, families and businesses.

In another first for the Bruce, the new restaurant will offer both indoor and outside dining. The auditorium, equipped with ultramodern audio-visual systems, will more than double the capacity of the museum's current lecture gallery.

Perhaps most important, there will be much more room to house the Bruce's growing collection of 25,000 works of art, natural history specimens, and scientific objects and artifacts, as well as a new study room to welcome visiting researchers to explore the collections.

"This is an incredibly exciting moment for Greenwich and its hometown museum, and for the entire Fairfield-Westchester region," said Robert Wolterstorff, the Susan E. Lynch executive director. "I know I speak for our family of staff, members, volunteers and trustees in expressing our profound gratitude to the community for their support."

Designed by the New Orleans firm of EskewDumezRipple, the new building addition will open directly onto Bruce Park and feature a delicate striated façade of cast stone and glass inspired by the surfaces of Connecticut's quarries and the rock outcrops of Bruce Park. Reed Hilderbrand Landscape Architects, in Cambridge, Mass., is creating a natural environment around the New Bruce that includes a sculpture trail and places to stroll and play.

New York City-based Turner Construction Co. is the lead contractor of the renovation and construction project.

Sitting high on a hill overlooking Greenwich Harbor, the Bruce Museum offers a changing array of exhibitions and educational programs that promote the understanding and appreciation of art and science.

The museum was originally built as a private home in 1853 for lawyer, clergyman and historian Francis Lister Hawks. Five years later, it was purchased by Robert Moffat Bruce a wealthy 19th century textile merchant who deeded the property 50 years later to the Town of Greenwich, stipulating that it be used as "a natural history, historical, and art museum for the use and benefit of the public."

Over the years, the community, through its generosity, built the Bruce Museum collection to nearly 15,000 objects representing the arts and sciences.

In 1992, the Bruce Museum undertook a complete renovation of its 139-year-old building. Reopened in 1993, the redesigned Bruce is an architectural model of museum quality.

Five years later, the Bruce Museum received accreditation from the American Association of Museums (now the American Alliance of Museums), an honor granted to fewer than 5 percent of all museums.