"It was just kind of one of those weird things," the fire chief said. 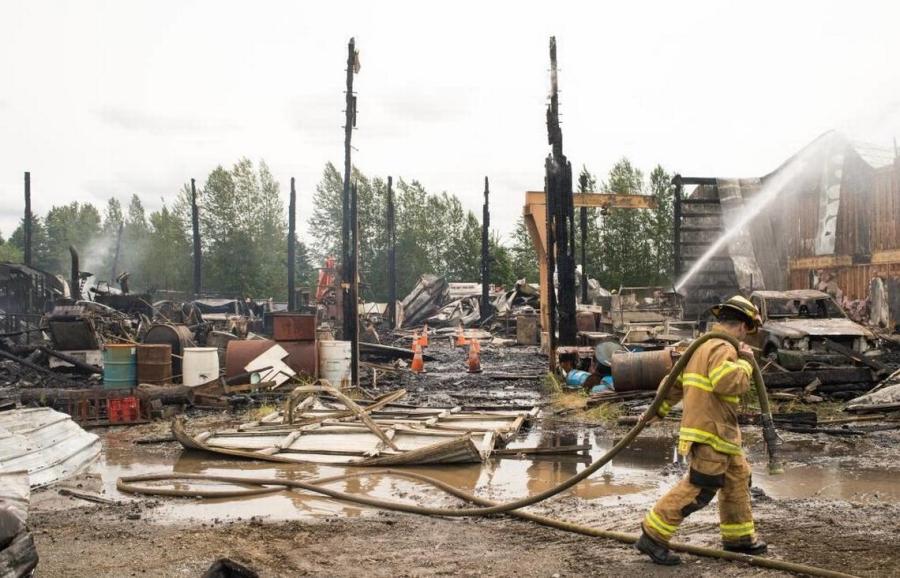 Ferndale — A fire Saturday morning tore through a 10,000-square-foot construction shop filled with flammable liquids and thousands of dollars in vehicles and equipment.

Most of Friberg Construction's shop, which sits on a 15-acre plot on West 20th Avenue near Interstate 5, was reduced to twisted, blackened metal after the fire that was first reported around 7:15 a.m.

Owner John Friberg, 76, found out about the fire almost immediately – he was at Cedar's Restaurant & Lounge having coffee with friends, including Chief Gary Russell with Whatcom County Fire District 7 when the call came in. Russell asked if Friberg's shop was on 20th Avenue, then said he thought it was on fire.

“He said, 'Well, I've got good fire insurance' – he thought I was kidding,” Russell said. “I said, 'No, John, my phone is telling me there's smoke and flames showing.'”

“It was just kind of one of those weird things,” Russell added. “Kind of a bad way to find out, but it was quicker than somebody calling him up.”

When Friberg showed up, three engines, a ladder truck and an aid car were already at the gate of the property, with firefighters preparing to cut it open, said Division Chief Dean Crosswhite. Friberg used his key to unlock it.

Crews initially only saw smoke from the eaves and began spraying the building. The fire moved from the north end to the south, where the open shop became a two-story office section. Before long, flames shot from the eaves and the shop portion was engulfed, Crosswhite said.

Firefighters spent about 30 minutes on the initial knockdown, and salvaged much of the office areas.

The building carried a heavy fire load, including diesel, acetylene gas for welding, and kerosene, said Will Anderson, an investigator with the Whatcom County Fire Marshal's Office. There were no alarms or sprinklers in the building, he added.

The fuel didn't change firefighters' approach, Crosswhite said. There were about six small explosions that could have come from aerosol cans or other small fuel tanks, he added. Firefighters' biggest concern was a propane tank on the south end of the building. It was never exposed to heat.

With most of the fire out, the hard part was putting out hotspots trapped in the building's metal siding, Crosswhite said.

“Metal tends to fall down and trap the heat,” he added, “so a lot of time is consumed pulling the metal off the contents so we can put them out.”

Friberg used an excavator to remove the metal, which made it easier to put some of the hotspots out, Crosswhite said.

Friberg said he started the family business 40 years ago, doing all types of construction work throughout the state and in Alaska. The building was built in 1996, according to records from the Whatcom County Assessor's Office. The property is valued at $736,000.

Anderson said the cause will likely be undetermined because of the extent of the damage.

Among the charred metal siding and exposed insulation lay remnants of work trucks, compressors and welding equipment. Smoke continued to float out from under the siding as workers began the clean-up.

“It's devastating,” Friberg said walking near the building's south-facing wall Saturday afternoon. “Your whole life is tied up in this stuff, you know. It's been here for 25 years. We built the building, bought the land and did all the stuff. And then you find out you're all done.”

Rob Downs, a mechanic and welder who owns a trucking business, said he works for Friberg when he's not on jobs of his own. The fire destroyed his compressor, welding torches and many of his other tools. It also melted one of his dump trucks.

“I'm at least out two, $300,000,” he said. Downs pointed to where the destroyed truck was sitting. The only recognizable piece was a charred exhaust stack sticking up out of the rubble.

Despite the loss, Friberg looked for a silver lining. No one was at the shop when the fire broke out, he said.

“Things are things, that's all they are,” he said. “We'll survive.”