The building permit for the upscale community, known as Legends Edinburg, was issued June 1, 2016 by the city of Edinburg’s Code Enforcement Department. 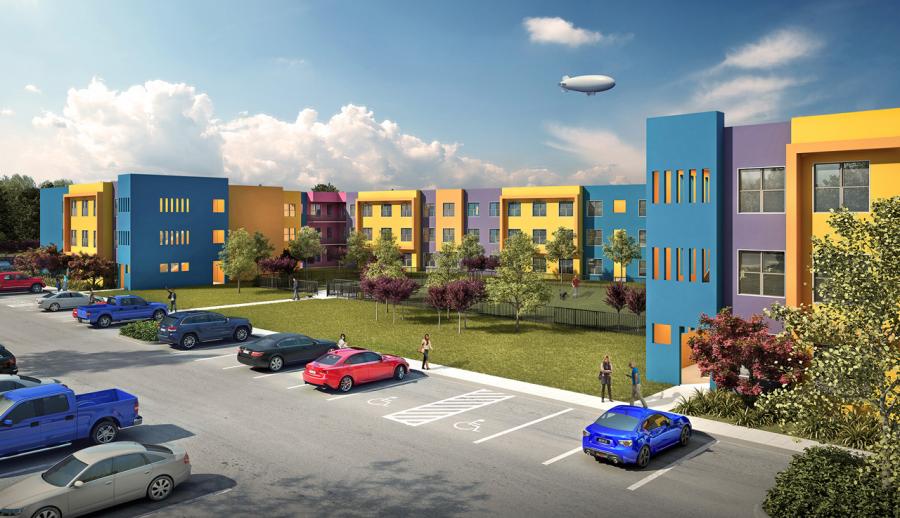 Construction has begun on a $29.1 million luxury, off-campus student residential community designed to serve The University of Texas Rio Grande Valley in Edinburg, and which will bring 588 beds to the market, the Edinburg Economic Development Corporation has announced.

The Edinburg EDC, of which Agustín García Jr. is executive director, is the jobs-creation arm of the Edinburg Mayor and Edinburg City Council.

The building permit for the upscale community, known as Legends Edinburg, was issued June 1, 2016 by the city of Edinburg's Code Enforcement Department.

According to Edinburg-based engineer Carlos Garza, P.E., of AEC Engineering LLC, construction began at the 16.17-acre site on June 13 for the 310,680 sq.-ft. (28,863 sq m) residential complex, which will have three separate buildings featuring a total of 252 units.

Garza is the project engineer for Domus Development LLC, the developer of Legends Edinburg, which will feature one-, two- and four-bedroom units.

Garza also represented Domus before the Edinburg City Council in successfully having the property rezoned to allow for its construction. In addition, AEC Engineering handled the civil design, platting and building permit acquisition of the property.

Legends Edinburg will be ready for move in for fall 2017.

“This area of Texas is rapidly growing and having the chance to develop a community near the new and improved University of Texas Rio Grande Valley's Edinburg campus, offers us the opportunity to do something different,” said Eric Jakimier, owner of Domus Development LLC and student housing industry veteran. “We really work hard to be architecturally sensitive to the areas we go in to and because of this, we are going to lean on some modern/Mexican architects who are personal heroes of mine. It's going to really stand out in the marketplace and be very different from your standard, run-of-the-mill project.”

“Total construction activities in Edinburg were almost $192 million for all of 2006, which is the highest figure in the past 10 years,” Iglesias reported. “By comparison, during the first four months of 2016, from January through April, we had already issued building permits for construction valued at more than $82 million.”

“We are catering to the diverse student demographic with Legends Edinburg,” said Jakimier. “Unlike most student housing communities, just over 30 percent of our apartments will be one-bedrooms, which will be a draw for the medical students who prefer the solidarity as the new medical program at the University of Texas Rio Grande Valley opens later this summer.”

Legends Edinburg is located near the corner of Chapin Street and Sugar Road, just 1/10 mi. from the Edinburg campus, which includes the School of Medicine.

Legends Edinburg will provide students with a wide range of amenities, including a salt-water resort-style pool, sand volleyball court, study rooms, a clubhouse with a game room, a computer lounge, separate dog parks for large and small dogs and more.

Residents will be able to choose from a variety of spacious floor plans including one, two and four-bedroom options.

Residents will be able to sign individual leases, meaning they are only responsible for the rent of their individual bed, not the rent of the entire apartment. The entire property is also equipped with high-speed Wi-Fi, and will employ an onsite maintenance and management staff.