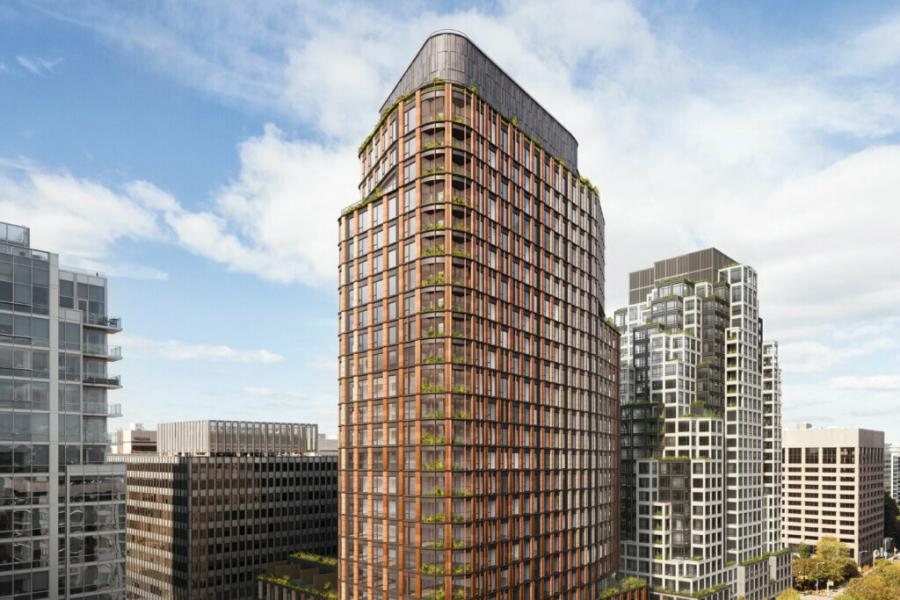 The site is located across the Potomac River from Washington, D.C.

The 300-ft.-tall buildings were designed by New York-based architecture firm COOKFOX, in collaboration with Torti Gallas & Partners, and include rooftop terraces.

The additions to Crystal Drive also will add a new pedestrian-friendly street between 18th and 20th streets. The developer is planning to include other neighborhood improvements such as public open space and streetscapes.

The additional residential housing in the Crystal City area will undoubtedly be high as Amazon's HQ2 campus is currently under construction at National Landing.

In January 2020, JBG Smith started construction on Amazon HQ's two 22-story towers at 1450 S. Eads St, known as the Metropolitan Park site due its proximity to a public park. Last September, it began a $14 million renovation of the park as well. The office space totals 2.1 million sq. ft.

The developer also recently completed a total renovation of a 14-story building in Crystal City, the latest to be occupied by Amazon.

According to the National Landing Business Improvement District, Amazon's presence in National Landing is expected to increase the daytime population there from 50,000 people to nearly 90,000 in the future — an increase of more than 70 percent.

JBG Smith was named developer, leasing agent and property manager of National Landing in 2018. It also is developing nearly 1,000 town houses and duplexes at nearby Pentagon Row.

The company's growing portfolio of owned and managed office, multifamily, and retail assets are in high-density, Metro-served amenity-rich neighborhoods in the Washington, D.C., market.