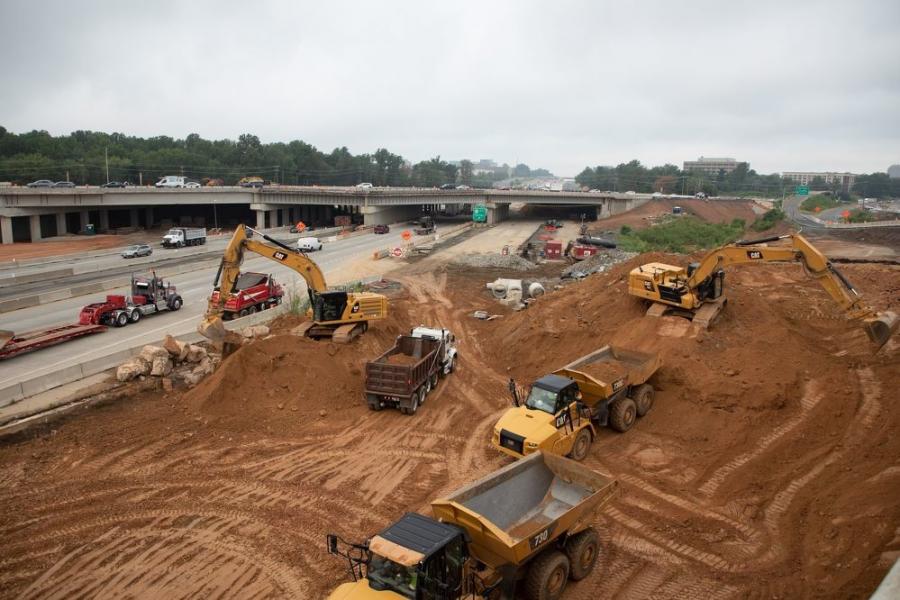 The earthworks at the Route 50 interchange shows some of the complexity of the Transform I66 project. Both express lanes and general-purpose lanes will have their own access ramps.

Motorists navigating the bustling 495 beltway around Washington, D.C., know they are taking their chances when they exit onto I-66 that services the growing cities of northern Virginia. Bottlenecks and slowdowns are commonplace. Most motorists figure that's the way it will continue for the foreseeable future.

Express Mobility Partners, a public-private partnership, is hoping to change that future by working with an army of contractors. FAM Construction is coordinating much of the construction as the partnership is building what it hopes to be a highway corridor that will reliably move traffic for the next 50 years.

The project is called Transform 66 Outside the Beltway and has ambitious goals. They include:

Travel on I-66 should be transformed through this multimodal project that will cost approximately $3.7 billion. The express lanes are scheduled to open in December 2022. The paving part of the project will be about 70 percent complete by fall 2021. 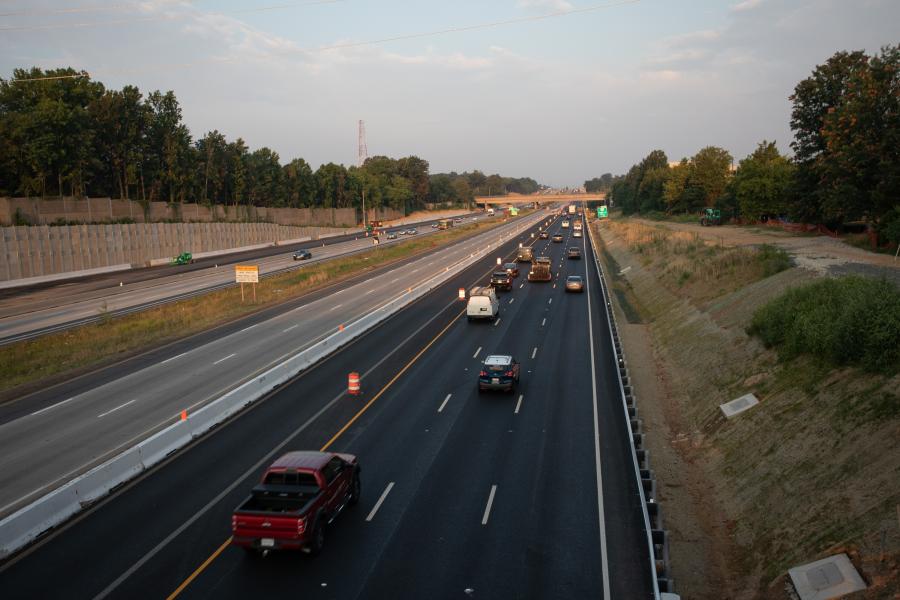 Before the new express lanes could be built, existing general-purpose lanes needed to be repaired. Using a mill-and-fill process, workers scraped off deteriorated asphalt and are replacing it with fresh asphalt designed to sustain the wear and tear of future use.

In addition, road shoulders were transformed into full-fledged general-purpose lanes so that normal traffic could be shifted there to enable workers the space to create the new express lanes. Old concrete roadways were removed and crushed with the material set aside for use as an aggregate base for future roads in other parts of the state.

One pavement executive called the project a symphony concert with as many as 50 subcontractors working in proximity as the busy traffic hums along nearby. The project will require nearly 3 million tons of asphalt for the new lanes, repair of the old lanes, parking spaces and new access lanes.

FAM Construction, a partnership between Ferrovial Construction and Allan Myers Construction, is the general contractor of the project. It also handled utility relocations and stormwater management, including Bull Run and Cub Run streams.

Superior Paving and Virginia Paving (a division of Eurovia USA) shouldered the paving work on the new and existing lanes. Because of the high volumes on the regular traffic lanes, much of the paving work was done by night paving with crews working from 10 p.m. to 5 a.m. Often, three paving crews from each company were at work simultaneously on the highways.

"We began paving in late 2019 on a 17-mile stretch of roadway from Gainesville to Route 50," said Mike Boyd, director of operations of Superior Paving. "A major challenge for us was that the congestion on I-66 often made it difficult for our trucks to get the asphalt to our crews. One little fender bender would happen, and traffic would slow to a near stop. Then, our paving crews might have to wait for the material to arrive."

The new lanes are being built with a combination of Superpave and Stone Mix Asphalt (SMA), a high-quality pavement mix commonly used by Virginia DOT for interstate traffic. The mixes also contained warm-mix additive technology such as Ingervity's Evotherm added to the liquid asphalt bringing flexibility and durability to the roads as they sustain the daily traffic and reduce environmental impact of the production processes. 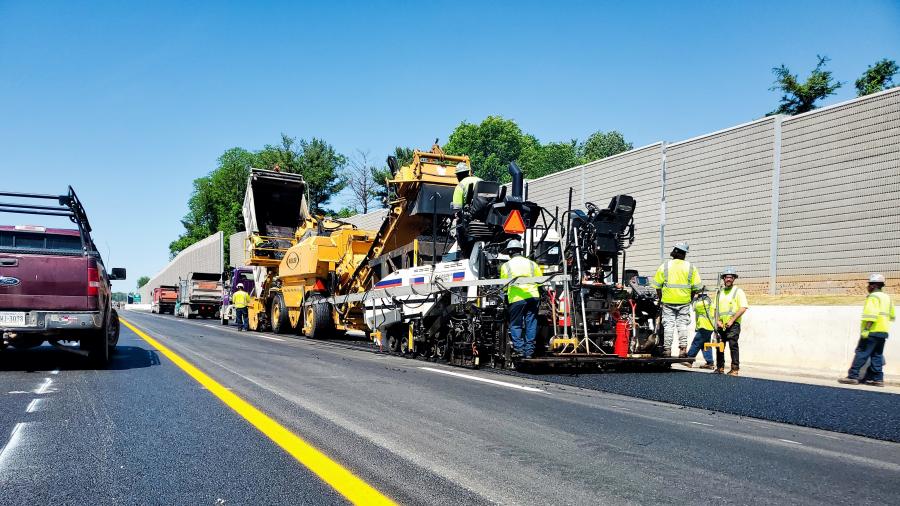 "Our paving equipment uses a combination of modern technologies, ranging from old-fashioned craft experience hitting variable depth profiles as well as sonic sensor automatic grade controls for averaging out imperfections for smoother rides," said Boyd. "Our goal is to tackle variability early in our lower lifts and aim for maintaining a consistent depth in our upper layers for the last two passes for optimal smoothness. For much of our repair work, we removed 2 inches of the old road and replaced it with 2 to 3 inches of new asphalt. However, in some instances, we needed as much as 8 to 24 inches of new asphalt where the road had deteriorated badly or draining profiles changed."

Superior Paving plans on using more than 1.4 million tons of asphalt for its part of the paving. On the new lanes, the construction team used 1-2 ft. of stone for the base, a 14-in. base/ intermediate layer of Superpave asphalt, then will finish with a 1.5-in. layer of SMA for the surface. The final pass of 1.5-in. layer of SMA will be added in 2022. Luck Stone and Vulcan Materials provided the aggregates for the project.

Virginia Paving is paving the freeway and new toll roads from the 495 Beltway to the Route 50 interchange. It requires approximately 1.2 million tons for its job. The two paving contractors face the same widespread problem in the construction industry.

"One of our biggest issues is finding enough workers and truck drivers," said David Horton of Virginia Paving.

Express Mobility Partners has provided $570 million to Virginia and local communities for other transportation needs including the construction of parking garages and road improvements near the I-66 corridor.

Flyover lanes and new connecting lanes are being built, which also will reduce future congestion. For example, drivers traveling eastbound on the I-66 corridor from Route 50 will be able to stay in a dedicated lane, traveling about 1.5 mi., then exit onto Chain Bridge Road without the hassle of crossing multiple lanes of a busy freeway to get where they want to go. The express lanes have been designed for easy entrance and exit. 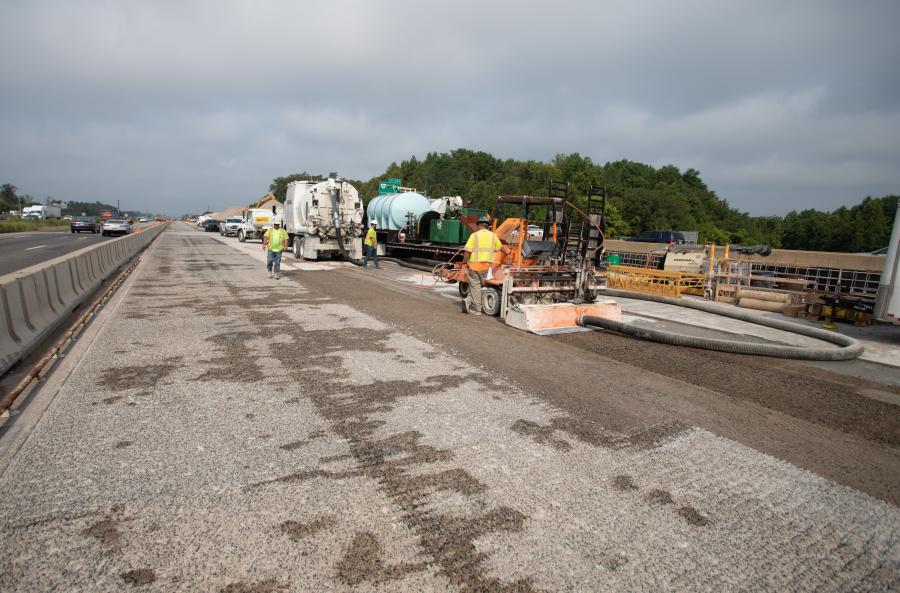 Another major piece of the Transform I66 package included the expansion of Route 28, which leads from I-66 to Dulles International Airport. Twelve new bridges are being built, which will create a multi-level interchange and provide direct access to the express lanes. These new access points will reduce congestion and provide drivers with more travel options. Changes also will include removing three traffic lights, providing motorists with less congestion and reduced travel time to local destinations.

"Transform I66 is a project that is the largest in Virginia and one of the largest on the East Coast," said Nancy Smith of FAM Construction. "It is a multimodal job that will provide bike lanes, sidewalks and means of travel for ride-sharing. The Virginia DOT studies show that when complete, this project will move from 2,000 to 4,000 more vehicles per day"

Smith believes the work will affect travelers for years to come.

"We believe this project will greatly improve mobility in this corridor," she said. "Our goal is to provide future travelers smoother, more reliable trips with less congestion."