Construction Under Way on $482M Sixth Street Viaduct in LA 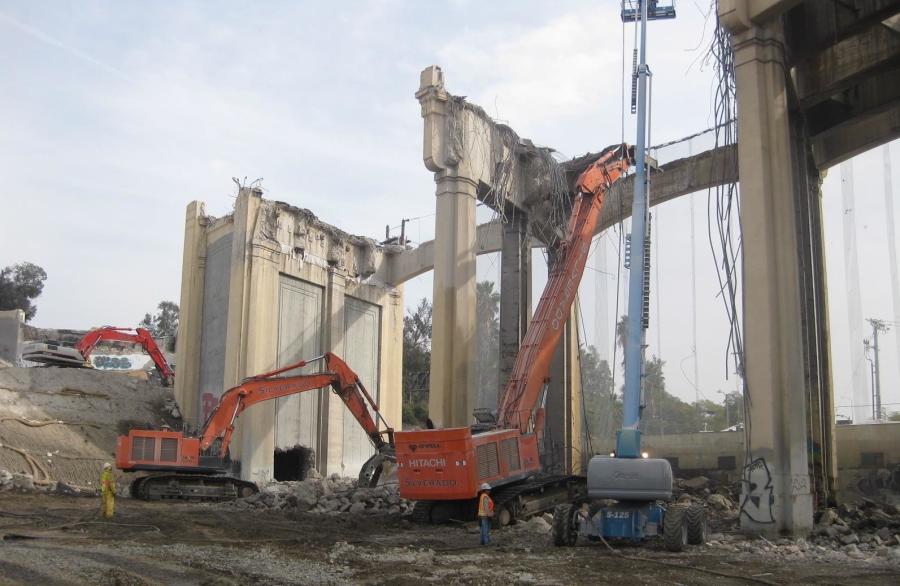 Built in 1932, the bridge spanned nearly 3,500 ft. across the river and was used to represent Los Angeles’s more gritty side in countless movies, music videos and television commercials, including riverbed car chases. (Bureau of Engineering, Department of Public Works, Los Angeles photo)

A bridge that was considered a major landmark in Los Angeles has been demolished to make way for a new $482M Sixth Street Viaduct. The project is the largest bridge project in the history of the city.

Because the viaduct spans 18 railroad tracks operated by five different railroad agencies, it was difficult to design and implement. The project team encountered challenges in obtaining constant access across the tracks as the railroad agencies have priority to use their tracks.

The obstacles are being dealt with through close coordination with the railroad agencies and working from the LA River when possible.

The Sixth Street Viaduct project construction phase started in 2015 with intersection improvements. It is scheduled to be completed in fiscal year 2020-2021. 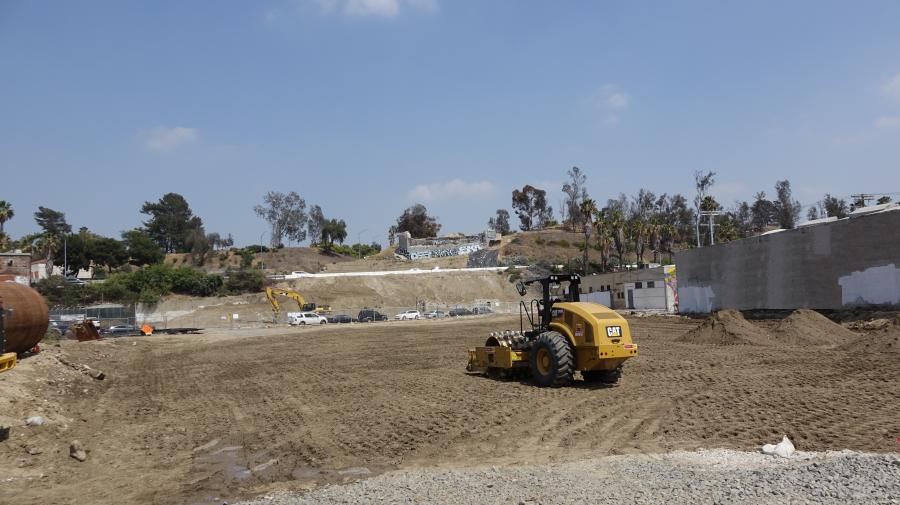 The original Sixth Street Viaduct acted as a vital connection between the growing Arts District on the west side of the Los Angeles River and the historic neighborhood of Boyle Heights on the east side. Built in 1932, the bridge spanned nearly 3,500 ft. across the river and was used to represent Los Angeles's more gritty side in countless movies, music videos and television commercials, including riverbed car chases.

But a rare chemical reaction in the cement supports and seismic vulnerability, necessitated that the Sixth Street Viaduct be replaced.

"Because of this ongoing and irreversible chemical reaction, the concrete has lost significant strength and the structure was subject to failure under predictable seismic energy releases," said Mary Nemick, director of communications for the Los Angeles Department of Public Works. "The viaduct also had design deficiencies consisting of inadequate roadway width, poor roadway alignment, and geometric and seismic design details."

The Sixth Street Viaduct Replacement Project, is being led by Gary Lee Moore, city engineer and the city of Los Angeles Bureau of Engineering.

It is the largest bridge project in the history of Los Angeles and is funded by the Federal Highway Transportation Administration and the California Department of Transportation, along with city funds.

The Ribbon of Light

Design of the new bridge, known as "The Ribbon of Light", was by Los Angeles architect Michael Maltzan, winner of the city's international design contest in 2012.

The Bureau of Engineering also is designing and constructing a 12-acre park underneath the new structure. It will be a one-of-a-kind project that utilizes space that previously was underutilized, making it into a world-class park with access to the Los Angeles River, public art, recreational programming and much more. The park is funded separately from the viaduct project. 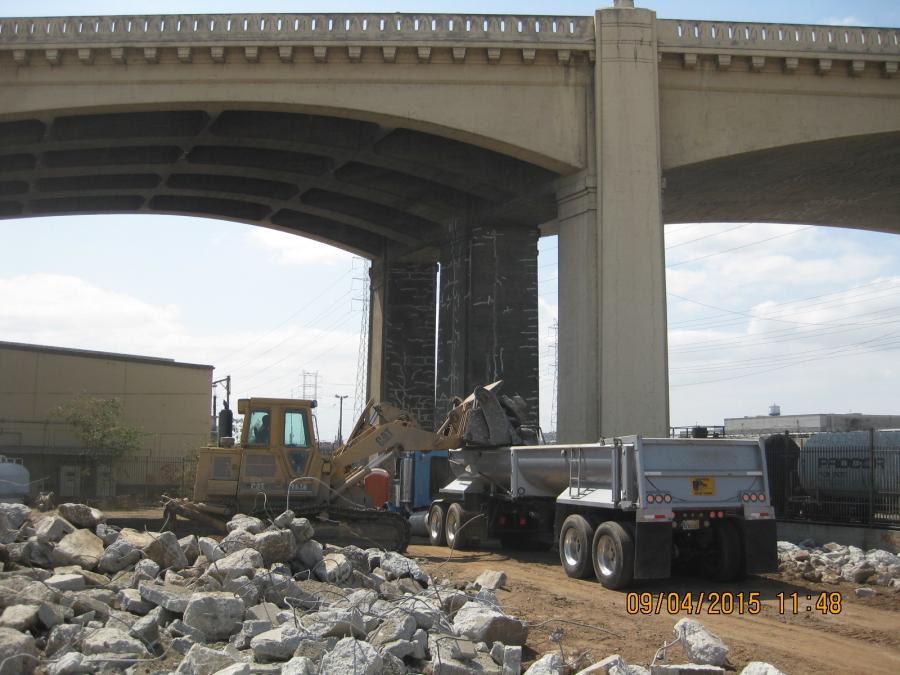 The design of the new bridge and the many community features on, next to and below the bridge, is bringing together a working collaboration of residents, elected officials, business leaders, schools, labor unions, cyclists, neighborhood activists and artists and many more, never before seen in a public infrastructure project in Los Angeles. In addition to the cost of replacing the viaduct, the city will invest more than $13 million in grant and city funds to construct infrastructure and landscaping improvements adjacent to the viaduct to improve connectivity, safety and recreational opportunities for residents and visitors.

Prime contractor for the project is Skanska-Stacy Witbeck, joint venture. The West regional office of Skanska USA is in Los Angeles. Stacy & Witbeck is based in Alameda, Calif.

The program manager for the Sixth Street Viaduct project is Julie Allen, P.E. in the city of Los Angeles Bureau of Engineering.

Between 90 and 95 workers are on the job daily.

Work Is Under Way

Workers are busy constructing a new, 3,500-ft. long viaduct. The original viaduct was demolished in 2016.

The new viaduct will have ten pairs of lit arches, bike lanes and wider sidewalks, along with stairway access and bike ramps connecting to 12 acres of recreational and open space under the bridge.

Driving past the site of the new Sixth Street Viaduct, visitors will see many Y-shaped structures framing the entire length of the new bridge. 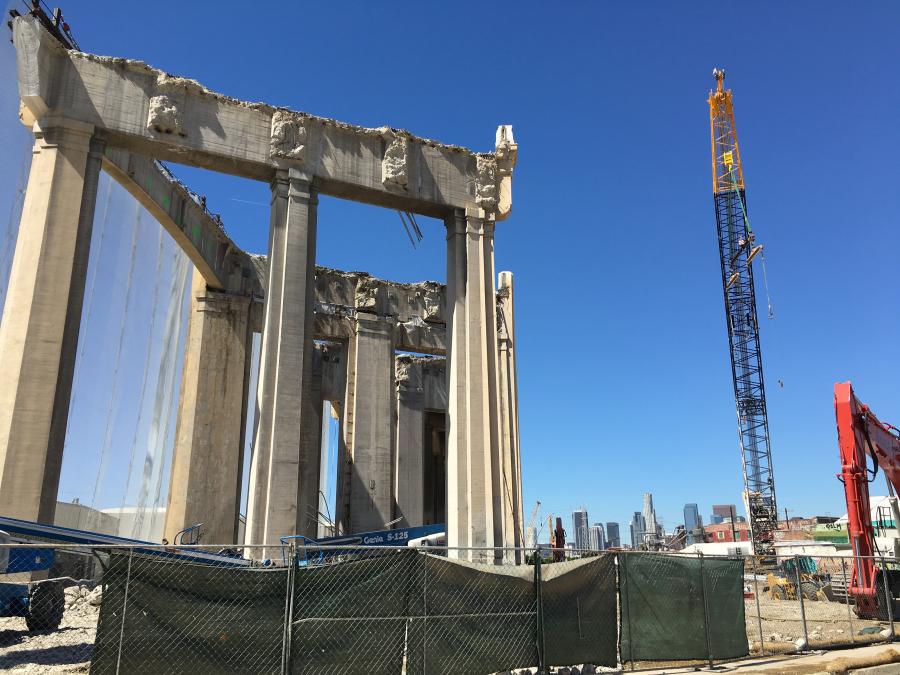 The huge structures are the concrete columns that will hold up the deck of the bridge. Crews have begun pouring concrete. Starting in late July, the Sixth Street Viaduct construction team began using liquid nitrogen to control the temperature of the concrete and help keep it cool.

Dealing with concrete in high summer temperatures is considered tricky, because higher temperatures can lead to a weaker final product. It's important to keep the concrete cool and wet so that it cures and hardens correctly.

A chemical reaction that solidifies the concrete happens when the cement and aggregate mixture comes into contact with water. This reaction is exothermic, which means that it produces heat. Excess heat can cause the reaction to happen too quickly, which can make the hardened concrete especially prone to cracks. The Sixth Street team is trying to stop the reaction from happening inside the mixing trucks.

It also can cool the concrete much more uniformly than ice water can.

Construction of the Y-Shaped Columns

"The construction of the elements we call the ‘Y-bent' columns is almost complete," Nemick said. "There are a total of 18 Y-bent columns in the viaduct. We have completed all the foundation piles, which are 10 feet in diameter and are on average 150 feet deep. We also are working on the transverse arch rib floor beam element of the viaduct which spans between the Y-bent columns."

In addition to the column work, several of the adjacent roadways will have added striping for bike lanes and sidewalks will be improved. These improvements are being implemented separately from the Sixth Street Viaduct project.

Approximately 6,500 tons of asphalt; 46,000 cu. yds. of concrete; and 8,250 tons of steel will be needed to build the new viaduct. The viaduct structure will be composed primarily of concrete.

Currently, four cranes are on site along with other standard bridge construction equipment including cement mixers and hauling trucks.

The project is creating hundreds of jobs, adding to the already vital economy of central Los Angeles and its neighbors.

"Transportation in the surrounding area will be improved — pedestrian and bicycle access and facilities will be added," Nemick said. "Safety is a concern, therefore pedestrian lighting and intersections with signal lights and crosswalks will be added around the viaduct. Local business owners will benefit from the new viaduct as there will be more foot traffic in the area. Hundreds of jobs have been created for the project."