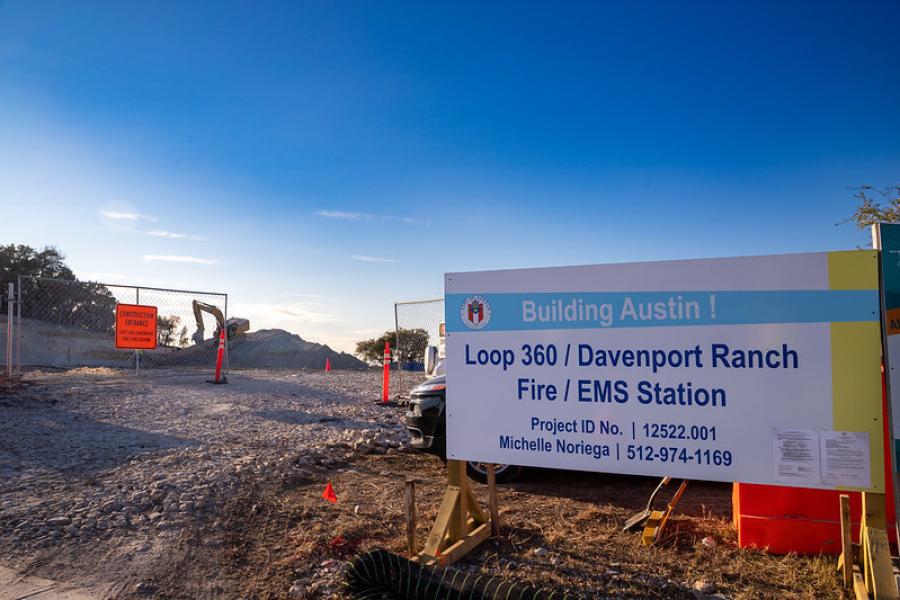 The Austin Fire Department (AFD) and Austin-Travis County Emergency Medical Services (ATCEMS) have their third, high-priority joint station under way in the Loop 360 and Davenport area in west Austin.

In 2018, the City Council voted to build five new stations around Austin in response to increased demand. A new station in Del Valle was completed in 2020 and another in southwest Austin opened in 2021.

Austin Public Works is managing the delivery of the station. Construction began in December 2021 and is expected to be completed in spring 2023. The station, known informally as the Loop 360/Davenport station, will be officially known as AFD Station #52 and ATCEMS Station #41 once complete.

Mayor Pro-Tem Alison Alter, who represents District 10 and the new home of this station, acknowledged the community's need for this new facility.

"I am pleased to see construction begin on the Loop 360/Davenport Fire and EMS station," Alter said. "This station will help improve response times in this area and better position our city to respond if a wildfire event occurs."

Located at 4601 Westlake Dr., the station will provide quick access to Loop 360 — Capital of Texas Highway and surrounding communities. AFD has an average response time goal of arriving on scene at an incident within eight minutes of receiving a 911 call, 90 percent of the time. Similarly, ATCEMS seeks to respond to its highest-priority calls in less than 10 minutes, 90 percent of the time. The new joint stations are helping the departments get closer to this goal.

"Making targeted investments in public safety resources like new stations for first responding agencies is a priority for the City of Austin," said Rey Arellano, assistant city manager over safety. "Improving how quickly Fire and EMS respond in the areas served by these five joint stations helps achieve our goal of being safe in our home, at work and in our community."

"Austin is a premier city and this is another example of keeping pace with growth by keeping our community safe," said Gina Fiandaca, assistant city manager over mobility. Public Works has been successfully leading the completion of these high-priority stations through effective collaboration with its partner departments. The quality of the two first completed stations demonstrates the success of this partnership."

For more information on all of the joint, high-priority stations, visit https://data.austintexas.gov/stories/s/rseh-55mp.