Contractors Foresee Gains in All Market Segments in 2020 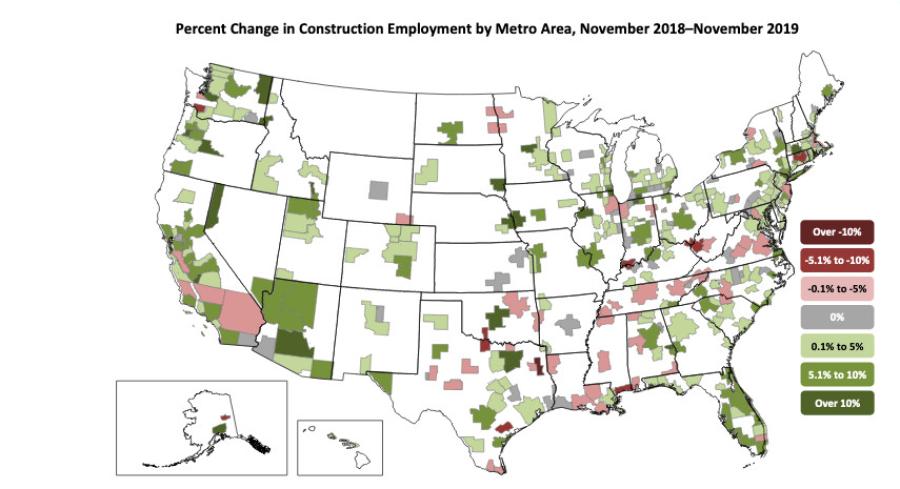 Construction spending rose 4.1 percent from November 2018 to November 2019, while industry employment grew in 226, or 63 percent, out of 358 metro areas, according to a new analysis of federal data released Jan. 3 by the Associated General Contractors of America. Association officials noted that its recent survey found most contractors are optimistic about the dollar value of projects available and expect to keep adding workers in 2020 but they are finding it hard to fill positions and anticipate it will continue to be hard to hire employees.

"Both the actual spending totals for November and our members' expectations for 2020 point to a continuing uptick in construction employment," said Ken Simonson, the association's chief economist. "It's likely that even more metros would have added workers recently if unemployment weren't at record lows in many areas."

Construction spending totaled $1.324 trillion at a seasonally adjusted annual rate in November, up 0.6 percent from October and up 4.1 percent from November 2018, according to estimates the U.S. Census Bureau released. There were year-over-year increases in all major segments — public, private residential and private nonresidential.

From November 2018 to November 2019, construction employment fell in 77 metros and was flat in 55. The largest declines occurred in New York City (minus 6,900 jobs, minus 4 percent) and Riverside-San Bernardino-Ontario, Calif. (minus 4,300 jobs, minus 4 percent). The largest percentage decreases took place in Danville, Ill. (minus 17 percent, minus 100 jobs), Fairbanks, Alaska (minus 12 percent, minus 300 jobs) and Hartford-West Hartford-East Hartford, Conn. (minus 11 percent, minus 2,300 jobs).

The new spending and employment data comes as the association's 2020 Construction Outlook survey found that for each of 13 project types, more contractors expect an increase in 2020 than a decrease in the dollar value of projects they compete for. Three-fourths of the 956 respondents expect to add workers this year, while only 5 percent expect a decrease. However, 65 percent say it will be as hard or harder to hire workers than in 2019, when 81 percent said they had a hard time finding qualified workers to hire.

Association officials added that labor shortages are forcing contractors to boost pay, invest more in training and adopt new labor-saving technologies. But they cautioned that those changes are not enough to allow many contractors to keep pace with growing demand, noting many firms report they have raised bid prices or proposed longer construction schedules because of labor shortages.

"The single greatest threat to continued growth in the construction industry is the shortage of qualified candidates for firms to hire," said Stephen E. Sandherr, the association's chief executive officer. "That is why Congress and the Trump administration must act quickly to boost investments in career and technical education and allow more people with construction skills to legally enter the country."