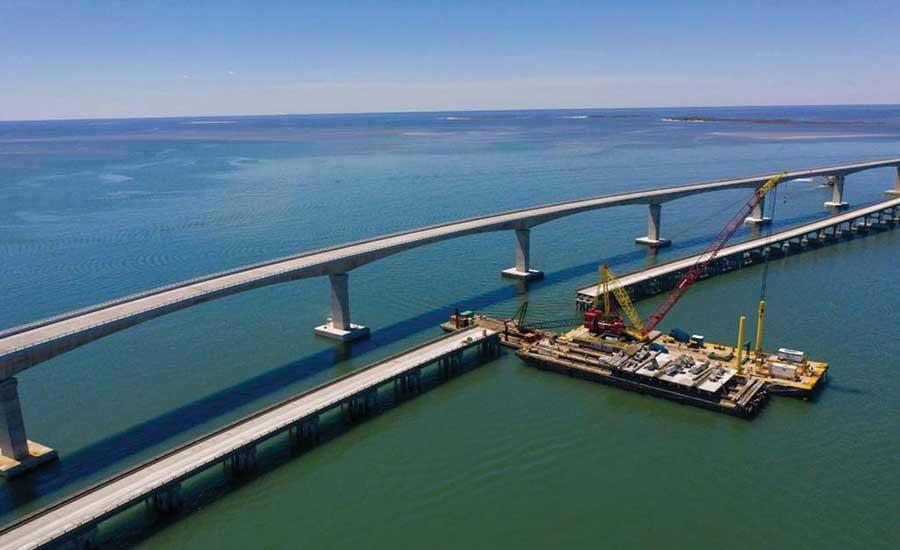 The 55-year-old, 2.7-mi.-long Bonner Bridge is well known to locals and vacationers, who used it to travel to the southern Outer Banks, including Cape Hatteras, from Nags Head, Manteo and the mainland. (PCL Construction photo)

The last remaining center span of one of North Carolina's most famous bridges went up in smoke and flying debris on May 27 as part of a controlled explosion.

Contractors blasted the final remaining horizontal section of the old Herbert C. Bonner Bridge over Oregon Inlet after initially trying to dismantle it in April. That effort failed when part of the bridge section collapsed unexpectedly, killing a construction worker.

The demolition in late May was captured by scores of videos shared on social media, according to the Charlotte Observer. Motorists waiting at a safe distance were able to video the giant concrete span break apart in the explosions from a 1,500-yard safe zone maintained by the U.S. Coast Guard.

The 55-year-old, 2.7-mi.-long Bonner Bridge is well known to locals and vacationers, who used it to travel to the southern Outer Banks, including Cape Hatteras, from Nags Head, Manteo and the mainland. Prior to its construction, a ferry was needed to cross Oregon Inlet.

It was replaced in 2019 by the $252 million Marc Basnight Bridge, "the first bridge in the state to incorporate stainless steel to thwart saltwater corrosion," according to the North Carolina Department of Transportation (NCDOT). The new 2.8-mi.-long bridge is expected to have a 100-year life span.

The ongoing removal of the Bonner Bridge made news earlier this spring when a section collapsed and killed a construction worker, McClatchy News reported. The 42-year-old man was part of a crew hired to dismantle the old bridge, officials said.

"The collapsed portion of the bridge posed many challenges for removal so a crew from CDI [Controlled Demolition Inc.] placed explosive charges in precise locations that brought the structure safely to the ground," the U.S. Coast Guard Station Oregon Inlet reported on Facebook.

A 1,000-ft. section of the old bridge will remain standing at the south end as a pedestrian and fishing pier. The decision to leave the section is due in part to the Davis Slough, "a strong current of water" that flows under the span, McClatchy News reported in 2020. Experts feared removing that section could change the current in the Oregon Inlet, resulting in "beach erosion and rough currents."

The base of pilings at the north end of the bridge also are being preserved to prevent "harm to the sensitive wetlands and marine life" near the shore, NCDOT officials told the Observer.