Controversial Toll Lane in Progress on I-77 in Charlotte

The express lanes were designed with no pre-set toll rates to ensure free-flow conditions 24 hours a day. 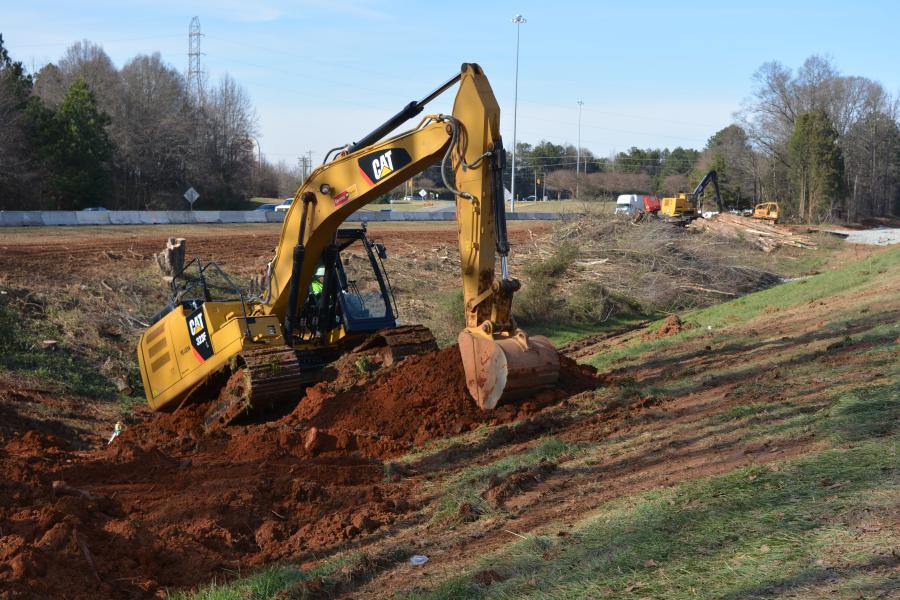 Sugar Creek Construction photo The I-77 express lanes will reportedly help resolve current and future problems on more than 20 mi. (32 km) of I-77 from the Brookshire Freeway in Mecklenburg County to N.C. 150 in Iredell County.

A controversial project that allows for a high occupancy toll road is now under construction in Charlotte, N.C. The I-77 express lanes will reportedly help resolve current and future problems on more than 20 mi. (32 km) of I-77 from the Brookshire Freeway in Mecklenburg County to N.C. 150 in Iredell County.

“The I-77 Express Lanes project will provide immediate and long-term traffic management solutions within three years,” said Jordan-Ashley Walker, NCDOT communications officer. “Under the project agreement, NCDOT is investing $95 million directly in the I-77 Express Lanes project, and an additional $145 million in other transportation projects for a total $240 million investment in the region.”

The plan calls for Cintra, the parent company of I-77 Mobility Partners, to build private toll lanes on the remaining public right-of-way, and operate them under an exclusive 50-year contract. The entire project is expected to be completed by 2018.

“This project will assist the area by providing long-term traffic congestion relief, continuing economic viability to an important corridor, and creating local employment,” said Javier Tamargo, CEO, I-77 Mobility Partners. “Fifty to 100 firms are anticipated to participate on the project during construction, generating local and positive impacts for the local economy.

“The express lanes will give you the ability to plan your trip along the corridor with the certainty of time,” said Tamargo. “It will be a driver's choice to use the I-77 express lanes. When it's necessary that you arrive somewhere on time — whether for work, daycare or other appointments — you will be able to avoid the traffic by paying a fee and using the express lanes. Other times, when there is limited or no traffic, it's your choice to stay on the general purpose lanes free of charge.”

Currently, I-77 has one high-occupancy vehicle (HOV) lane, often referred to as a carpool lane, in each direction within parts of the project's boundaries. The project will convert those HOV lanes to express lanes. Crews also will construct a second express lane alongside the converted HOV lane on I-77 North and South.

According to NCDOT, Charlotte's urban population has increased 135 percent in the past 25 years, with significantly more vehicles on the roadway. Traffic on I-77 between I-85 and Iredell County has risen more than 20 percent in the past five years, creating a congested commute for drivers during peak travel times. Traffic forecasts show the congestion will only get worse if there are no improvements made to the road.

Motorcyclists, buses and carpoolers with three or more occupants will be able to use the express lanes for free. In addition, by setting speed standards on the express lanes, NCDOT can ensure that traffic will flow at speeds of at least 45 mph during peak travel times, while vehicles on the general-purpose lanes might move at a much slower pace.

Construction of the I-77 Express Lanes will occur in the median of I-77 with minimal disruption to commuters, according to Tamargo. “Occasional lane shifts and closures will only take place in overnight hours. However, with day and night activity in the work zone, motorists should drive safely and stay alert at all times.”

The I-77 project is divided into three key sections. The southern section extends from the Brookshire Freeway near Tryon Street onto I-77 North for about 2 mi., and along I-277 from I-77 to North Brevard Street in uptown Charlotte. This portion of the project requires right-of-way acquisition, along with current HOV lane conversion and new express lanes next to the existing general-purpose lanes.

The design includes a bridge that would provide direct access from I-77 to I-277. The southbound lanes of I-77 that were narrowed during construction of the existing HOV lanes also will be widened, resulting in two express lanes in each direction.

The central section begins at the I-85 interchange and continues approximately 15 mi. to Catawba Avenue in Cornelius. It includes converting the existing HOV lanes to express lanes, providing two express lanes in each direction. As for the northern section, beginning at the Catawba Avenue interchange and continuing approximately nine miles to N.C. 150 in Iredell County, it will feature one express lane in each direction. This section does not currently have HOV lanes.

Officials say the public-private partnership enables NCDOT to address the immediate need and complete the project within four years, instead of the estimated two decades it would take to secure enough state funding to move forward. NCDOT has worked with local and federal partners for a number of years to bring about the express lanes project.

Public hearings and meetings with town mayors, managers, planning organizations, businesses and local legislators have also been held; however, not everyone is pleased with the plan. WidenI77.Org, a non-profit which aims to widen I-77 without toll lanes, believes toll lanes are an expensive, non-solution that will negatively impact the local economy, increase congestion on the general purpose lanes and put drivers at a disadvantage. The group filed suit against NCDOT, I-77 Mobility Partners and the state of North Carolina, in hopes of stopping the project permanently. Despite the legal challenges, construction of the I-77 Express Lanes continues, for now, as scheduled.

In early January, before a packed courtroom, a federal judge in Charlotte ruled in favor of Cintra and the NCDOT , claiming it was not the duty of his court to end the I-77 toll lane contract. Opponents were denied their motion for a stay in the case to put the litigation on hold. The court also ruled the matter should be settled by the North Carolina state legislature.

Construction of the I-77 Express Lanes in the Charlotte and Lake Norman region began in mid-November, in the area south of Exit 23 Gilead Road to north of Exit 28 Catawba Avenue. Early tasks involved traffic control measures including restriping the roadway and shifting the lanes, installing a concrete safety barrier near the median and placing road markers along the project area. Initial construction work has also involved clearing the land and grading of the area.

Sugar Creek Construction is serving as the general contractor.

The biggest concerns regarding the project involve ongoing traffic in the area.

“This a major road construction project along 26 miles on I-77 a highly traveled interstate and a key highway into and from Charlotte,” said Carlos Garcia Escrig, Sugar Creek Construction CEO. “Traffic control is probably the most challenging aspect, as with any major road construction. However, in this project we are maintaining the same amount of travel lanes in each direction that were in place prior to the start of construction, with less impact to the traveling public. In addition, any traffic control and lane closures are conducted at night.”

“The first area where construction will occur is the segment from south of Exit 23 to north of Exit 28. Work will be performed in the median of I-77. Once work in the median is complete, traffic will be shifted towards the median. The same amount of traffic lanes will be maintained in each direction on I-77.”

Some of the key tasks yet to be carried out include the completion of the design work and the environmental permitting activities along with the limited right-of-way acquisitions and utility relocations.

“For the most part, the project entails widening Interstate 77 into its existing median. Prior to the start of construction, surveys and geotechnical studies of the site were performed to aid design of the new structures, identify existing structures and drainage requirements. Site preparation ahead of actual construction consists of any necessary clearing and erosion control and traffic control to establish the work zone and form a foundation for following work,” said Escrig.

The project is more than 26 mi. (41.8 km) consisting of interstate widening, widening bridges, bridge replacements, repaving, utility relocations, right-of-way acquisitions, among others. There is no one specific site.

“Our bridge work consists of widening existing bridge, bridge replacements and constructing new bridges. We are anticipating that 1.4 million cubic yards of dirt/fill material will be moved on this project,” said Escrig.

Weather also is a concern for construction crews.

“Winters in North Carolina can produce cold and rain,” Escrig said. “Weather is a factor for any outdoor construction work, but there are many ways to manage that. Our project time period encompasses two winters. With a 26-mile project there is always something to be done. Planning is key, taking advantage of good weather by increasing the effort, using every day as a possible work day and using means and methods that diminish the effects.”

According to officials, tolls at peak hour are expected to range from 14 cents to 40 cents per mi., on average. Actual toll amounts will vary by time of day and traffic conditions, but will only be as high as the market supports. There will be at least six segments in the corridor between Mooresville and Charlotte and drivers will choose how many segments they use each day.

The express lanes were designed with no pre-set toll rates to ensure free-flow conditions 24 hours a day. Tolls will only be what non-HOV users are willing to pay for a predictable commute at no less than 10 mi. below the posted speed limit. If drivers decide it's not a good value to pay a toll at a given rate, I-77 Mobility Partners will have to lower the toll to encourage drivers to use the lanes.

Proposed entrance and exit points were recently added at Exit 23 and Exit 25 in Huntersville and Exit 28 in Cornelius, based on community and business input.

“As we visited with residents and business owners from Lake Norman to Charlotte, we listened to what was important to people traveling the corridor in both directions,” said Tamargo. “The proposed new access points reflect the feedback we heard from users of I-77.”

The enhanced design provides various options to access the express lanes, including entry and exit only locations and transfer areas.

The entry only access areas on the express lanes are located near key interchanges to enable drivers to access the general purpose lanes from the major crossing streets between Exits 23, 25 and 28.

The exit only points are designed the same way for convenient access to the interchanges in these locations.

I-77 Mobility Partners LLC, an independent company of Cintra, will design, build, operate and maintain the Express Lanes project as part of a public-private partnership with NCDOT. Cintra manages more than $14 billion in infrastructure projects in the United States.

Sugar Creek Construction LLC is a joint venture between FA Southeast and English Construction. FA Southeast is one of the world's preeminent design and construction firms, with more than 80 years of experience in the private management of transportation infrastructure.