Courthouse Inspired by the Past Looks to the Future

The $90 million courthouse project, funded in fiscal year 2015, will be performed in two phases, including renovation of the existing courthouse. 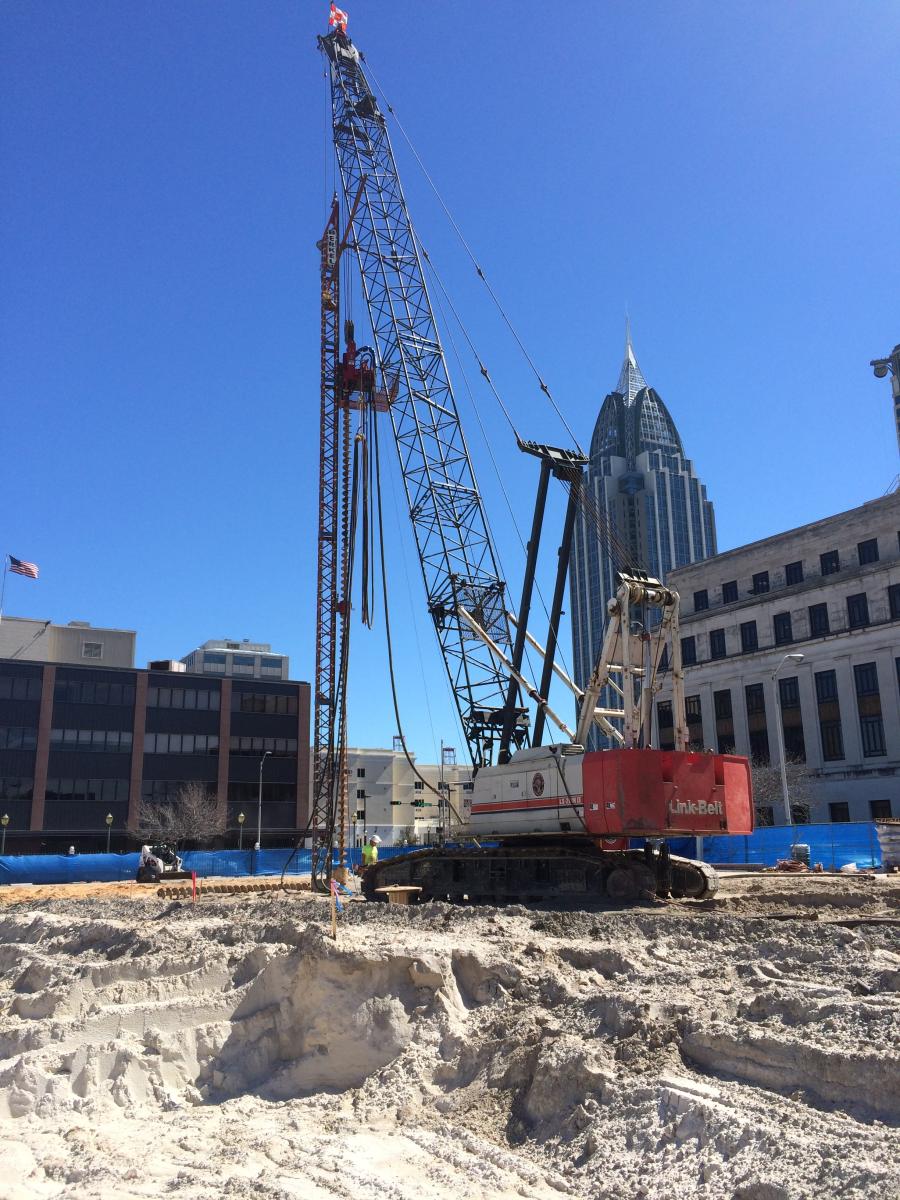 GSA? photo “The site has been cleared, excavated and we are working on production piles for the building foundation,” said George Yates, project executive.

Inspired by the past but looking to the future, officials in south Alabama are preparing for a new 158,000 sq. ft. (14,678 sq m) federal courthouse. The $90 million courthouse project, funded in fiscal year 2015, will be performed in two phases, including renovation of the existing courthouse.

“The historic John A. Campbell U.S. Courthouse was built over 80 years ago, and does not meet the current needs of the federal courts at this time,” said Gregory Andrews, spokesperson of the Southeast Sunbelt Region, U.S. General Services Administration (GSA). “GSA is pleased to begin construction on a new facility that will address the present and future needs of the federal courts.”

The project has been more than a decade in the making, with officials needing more space and hoping for a more modern structure to meet 21st-century needs. The original plans proved too costly, and were eventually scrapped. The Campbell Courthouse, constructed in 1932, and has been an integral part of the downtown community through the years, and will continue to play an important role when the new structure opens.

“It serves as symbol of the federal presence in Mobile and a powerful example of federal architecture of the 1930s,” Andrews said. “The adjacency of the Campbell Courthouse to the new courthouse, as well as the related courthouse functions, made it important for the two federal properties to work together. The design of the new courthouse reflects a respectful attitude toward the historic Campbell Courthouse and GSA's desire to preserve this historic asset for future generations.

“As landlord to the federal government, GSA recognizes the power of public spaces to transform communities,” said Dong. “GSA has designed the Mobile courthouse project to meet the judiciary's 21st-century needs, contribute to local development goals and maximize taxpayer savings. The project couples the public's investment with design excellence and economic opportunity.”

Stimpson told reporters, “I applaud the U.S. District Court and the U.S. General Services Administration's decision to invest in Downtown Mobile because every great city has a great downtown. The restoration of the historic John A. Campbell U.S. Courthouse and the construction of a new U.S. District Courthouse will be a catalyst for growth attracting new jobs to our area.”

In 1939, as part of a WPA program, the original building was expanded and the court was partially enclosed, with instructions to match the existing structure. It became the first air-conditioned courthouse in the nation.

The new Mobile courthouse project will meet the long-term needs of the U.S. Courts in southern Alabama, and consolidate court operations out of leased space into a secure, high-performing, federally-owned campus that reportedly saves more than $800,000 in annual lease payments. The courthouse will include six courtrooms and nine chambers, and feature a limestone facade sourced from Russellville, Ala.

The new building will reportedly be set back from the curb 50 ft. (15.2 m) on all sides and be surrounded by oak trees and iron fencing. It also will provide 17,000 sq. ft. (1,579 sq m) of secure parking. The design will allow for future expansion to address a 30-year plan. Availability of the funding was the primary driver for initiating the project.

Yates Construction was awarded the design build contract in May 2015, with work on the project starting in February 2016.

“The site has been cleared, excavated and we are working on production piles for the building foundation,” said George Yates, project executive. “We are currently very early in the construction of the building. Following pile foundation, we will begin work on the building structure, exterior envelope and interior build out.

“The site is very close to being a balanced site, which will require minimal haul off or import. Additionally, the design of the building reduces the amount of soil that is required to be disturbed,” said Yates.

The construction of the building will require multiple cranes, as well as hydro mobile scaffolding for the exterior façade. Materials being used include structural steel, precast concrete and Alabama limestone.

“Early site work preparation required the verification and closure of underground storage tanks, and the abatement and demolition of a small existing building located on the site, in addition to asphalt paving and previous building foundations,” said Yates.

A roughly 2,500 sq. ft. (232 sq m) community foundation building was located on the site, along with a mixture of paving and building slabs that were being used as a parking lot for courts and federal employees.

“The community building was a relatively small, single-story structure that was demolished within a few days, utilizing a track hoe and a front-end loader. The building was built as one of the first buildings within the University of South Alabama system. Several pieces of the limestone façade facing St. Louise Street were salvaged and delivered to the University of South Alabama at their request, for induction into their school museum,” said Yates.

Excavation took place in March. This was to prepare for the foundation, and was the start of the test pile program.

“The test pile program is used to verify that the capacity of the piles proposed will support the design loads in the soil where the building is located,” said Yates. “The test pile was performed successfully, and following the engineers review, the pile contractor was released to install production piles to support the building.

“Thus far, the most challenging part is working to ensure that the needs of the client and end users are addressed within the guidelines of the project, while delivering a building that is functional, secure and that fits within the Mobile downtown area.

“This project has been in the works for many years. GSA, the courts and the city of Mobile have worked very hard to bring it to fruition. Yates is dedicated to making the project a success in all aspects and providing a building that all stakeholders are proud of.”

The National Register of Historic Places describes the current five-story, 146,000 sq. ft. (13,563 sq m) building as a symbol of the federal presence in Mobile, while serving as an example of Federal architecture of the 1930s. It also represents the Modern Classic style of architecture using a combination of Neo- Classical Revival, Renaissance Revival and Art Deco inspired detailing.

Lee Becker, FAIA, Hartman-Cox Architects, said it was important to get a feel for the area. He and his colleague spent time exploring the community, looking at area schools, churches and other structures.

“Mobile has a rich architectural tradition,” said Becker, whose firm won a design-build contest. We wanted to learn more about the town's character, so we walked around downtown Mobile and also evaluated GSA's guidelines.

“There was a real desire to have the courthouse match Campbell. The new courthouse is a larger scale building. In Campbell, the courtrooms are two stories high and that doesn't work now. The new building is taller by design.”

Becker said, “My biggest hope is that when the building is finished, it will fit the site so well, people won't be able to imagine a time without it.”

As part of his research, Becker traveled to the Russellville quarry in Franklin County, to get a better understanding of Alabama limestone. It's a trip he won't forget anytime soon.

“It was completely underground, like something out of the Indiana Jones movies. It was pretty amazing to experience. The limestone is cut, and they let it cure for a year or so. It's a very interesting process.”

“Silver Shadow Alabama Stone is unique to only this quarry. The material is an oolitic limestone and has a light gray to white color background, with warm charcoal gray veins throughout the material. This stone has been used on monumental projects dating back to the late 1,800s. The activity in the stone clearly displays that this is a natural, not man-made material.”

“Once cut, the blocks, which can weigh 20 tons, are removed with large front-end loaders and moved to the plant via flatbed semi-trucks. We quarry several thousand blocks per year, and can augment with additional shifts, if more material is required at any given time.

“There has been a great deal of care in the design of this project, as can be seen by the classic details of the architect. Natural stone lends itself better to details as such than architectural precast, and the material ages in a timeless manner.”

Specifically, the restoration will include cleaning the existing limestone, accessibility upgrades to all public restrooms and the front entry, an automatic fire suppression system and building systems replacements including HVAC, electrical, plumbing and other systems.